What are marshmallows and how are they made?

Marshmallows are a white, fluffy candy, that easily melts and becomes sticky. They are almost all sugar (and corn syrup which is also sugar), with whipped gelatine. They're vanilla flavored, usually with clear vanillin, because the pure whiteness is the very essence of the candy. 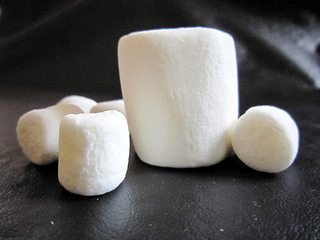 They're sometimes colored, but not usually: 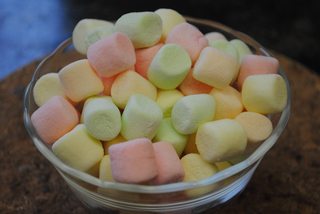 The little ones are often served in hot chocolate milk, and they're often used as ingredients in other things like fudge.

It's also very traditional to skewer them on a stick and roast them over a campfire: 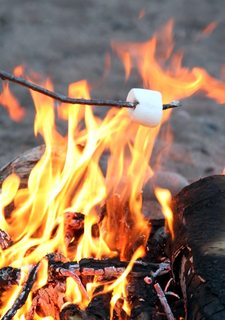 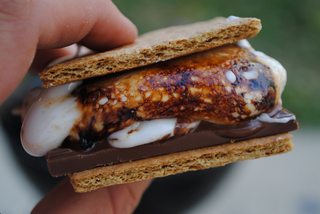 Put the roasted marshmallow between graham crackers with chocolate, you have a s'more, a favorite snack of campers everywhere.

Here's a tour of a huge marshmallow factory: YouTube video with some fun trivia too.

Here's a homemade version that I have done, complete with handy video, it's kind of a fun afternoon: Alton Brown's Marshmallows

Not the answer you're looking for? Browse other questions tagged candy fondant or ask your own question.

11
Are there any substitutes for Shortening?
7
What exactly is "vegetable shortening"?

4
How do you form Marshmallow Ropes?
9
Converting Peppermint Marshmallow Recipe to Raspberry
9
How can I make vegetarian marshmallows?
5
How do you dry homemade lollipops so that they are no longer sticky?
4
Edible supports for a fondant palm tree
0
What are sugar-free sweets actually made from?
3
Candied almonds made In a crock pot didn't harden, are still gooey
6
Making super-sour sweets -- issues with stickiness
0
how to quickly dry out home made marshmallows?
2
My fudge is getting thick when I start to stir in marshmallows, chocolate chips and nuts