Is there a way to make compressed watermelon without a vacuum machine?

I've got in mind to make a dish with compressed watermelon, but I don't have access to a vacuum machine. I've tried once using weight, but it just cracks because the pressure is all from one side. Thoughts? If not, can it be done with a home vacuum food-saver type device instead of a restaurant quality vacuum machine? What about denser foods such as canteloupe or cucumber?

Haven't tried it but here: http://newmountaincookery.typepad.com/a_new_mountain_cookery/2008/06/compressed-wate.html

The link suggests the following technique:

I've wanted to do this at home for some time, but am concerned that nothing but a vacuum chamber will really work. Thomas Keller in Under Pressure says "Compression, which requires a great deal of pressure..." Additionally, my understanding was that compression does not rupture the cell walls, but rather evacuates the space between the cells making a dense, crisp texture with an enhanced flavor (same amount of flavor in less space). That is certainly how it's described by Mark Hopper of Bouchon Las Vegas who is credited with coming up with the technique. I would think that methods that didn't use a vacuum (weight, freezing) would tend to rupture the cell walls rather than just pull the cells in to a more dense packing.

My guess is that a home vacuum sealer is not strong enough to create the vacuum necessary, but I've never tested it. The Thomas Keller quote and the lack of this technique on popular sous vide at home blogs makes me a little skeptical that it's feasible with the cheaper home models. Sous Vide Cooking lists two issues with the home style vacuum machines, liquid extracted from the fruit can clog the machine and the vacuum isn't strong enough.

So the more fundamental issue with a home sealer is the pressure outside the bag rather than in. A home sealer with a bag (rather than cannister), can expel air but not create a strong vacuum. The chamber sealer gets around this by creating the same vacuum on both sides of the bag.

I sure hope I'm wrong though, because i'd love to make Thomas Keller's Steak Tartar with Egg Yolk (aka Watermelon with Mango). 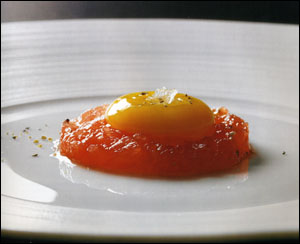 Both the chamber and simple vacuum sealer produces the same pressure once the process is complete. That would be 15 pounds per square inch. The chamber process has an extra step, and it's important. When the vacuum is being drawn in the chamber, the food is exposed directly to the vacuum, and air from inside the food is free to diffuse out. You can see this as the "boiling" effect in the videos. Then, when the seal is made and the chamber is purged, the food is compressed. This is much more effective because liquid can get forced into the the part of the food that used to contain air. With a simple sealer, the plastic bag gets forced against the food right away, and this prevents air from diffusing out of the food.

"The chamber sealer gets around this by creating the same vacuum on both sides of the bag."

If you have a vacuum, ie the same pressure on either side of the bag then there is no force on the contents of the bag.

To quote Thomas, "Place the piece of watermelon in a bag and vacuum-pack at the highest setting."

The pressure on the watermelon comes from the atmosphere pushing equally on all surfaces of the bag, trying to make it smaller. This is why weights won't work, they only puch on two sides of the watermelon.

This technique described in the link below works well with watermelon.

You need a ISI whipper, but that is a heck of a lot less expensive than a chamber vac.

Not the answer you're looking for? Browse other questions tagged sous-vide molecular-gastronomy vacuum or ask your own question.

-1
Where to rent vacuum chamber?

23
Is there any way to sous-vide without a machine
4
How can I make a foam without an immersion blender?
19
Is there any trick to make a palindrome-cocktail?
5
Vacuum sealing with a submerged ziplock vs home machine vs professional machine
9
Is there some trick to vacuum sealing broccoli?
4
Sous Vide without vacuum. What liquid should be used?
2
Are there disadvantages to storing bread in a vacuum box?