What are "fondi di carciofo" called in English?

I would like to know what the English name is for the Italian word fondo di carciofo as I was not able to find it on the Internet. Basically, carciofo means artichoke and fondo means the bottom part (not the heart which in Italian is cuore, and not the stalk which in Italian is manico, although sometimes the stalk is included with the bottom part and sold together and such combination is very delicious indeed).

So, here is a picture of a bunch of fondi di carciofo from the Internet: 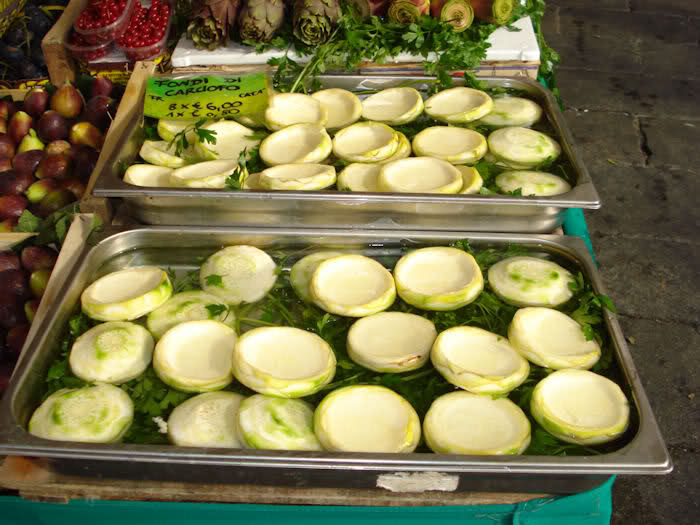 Here is the closest picture I could find on the Internet for the artichoke bottoms with stem, although the stem has been cut away from the artichoke bottoms. Too bad I could not find a picture with both in one piece as in Italy they can often be purchased in such way; next time I go to the market I will take a picture and post it. 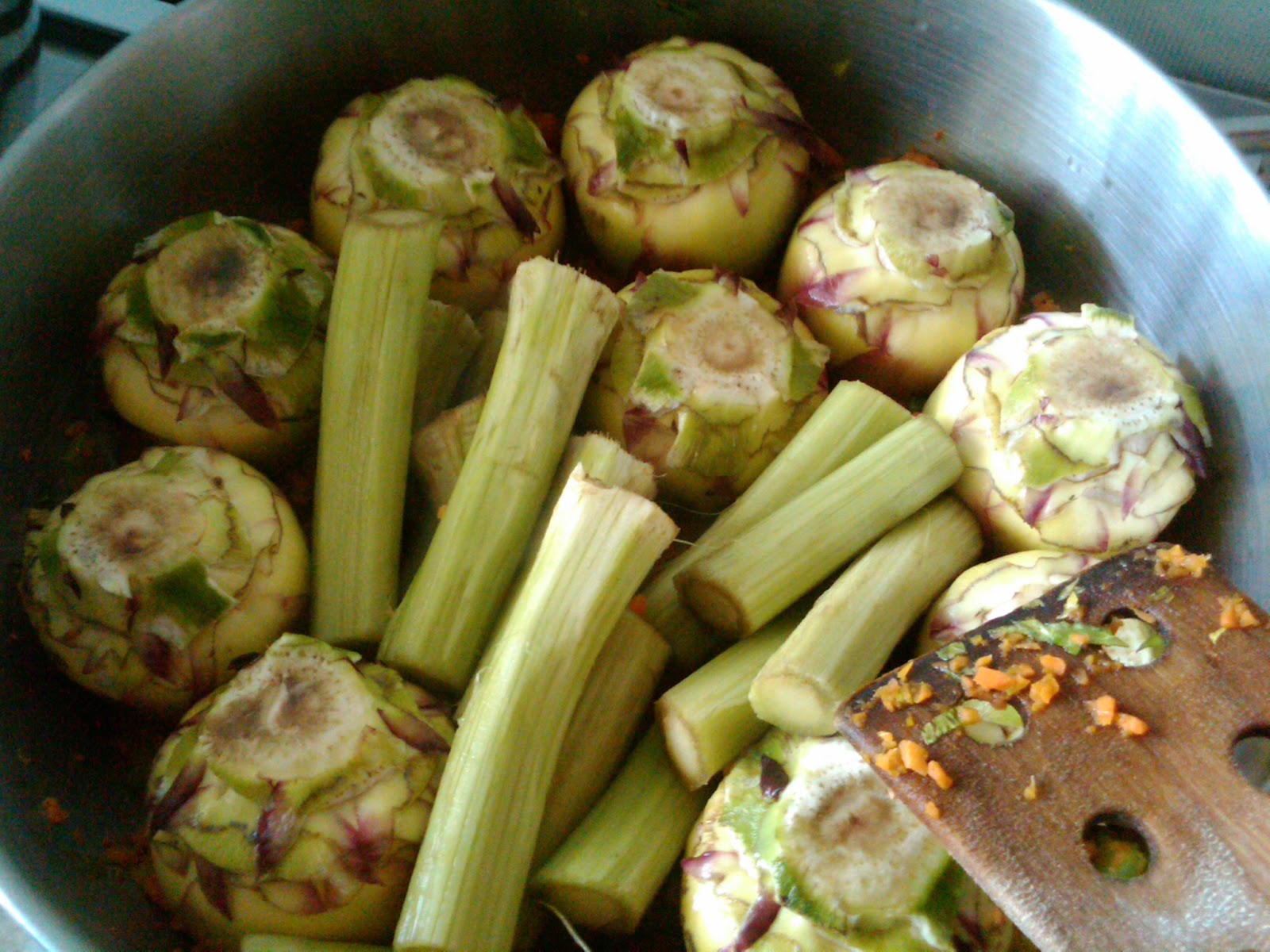 Because of the comments that were posted below, I have included a picture of what a cuore di carciofo is in Italy (word-by-word translation: artichoke heart). Basically, it's the inner part of the artichoke with the outer leaves removed. Once cooked, unlike the outer leaves, which cannot be fully eaten as they would not be digested properly, the inner part of the artichoke can be eaten in its entirety once boiled. Here is a picture of cuori di carciofo: 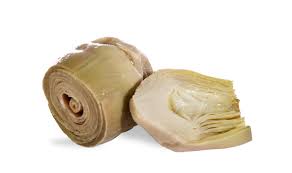 On the other hand, here is the outer part of the artichoke looks like. Italian refer to this as carciofo, but often this is used as a synonym for the artichoke leaves (more commonly known as foglie di carciofo). Italians buy these in the supermarket or at the market and eat the bottom part of all of the outer leaves of the artichoke by scraping them against the bottom teeth once cooked, often dipping them in a little bit of mustard to give them some taste: 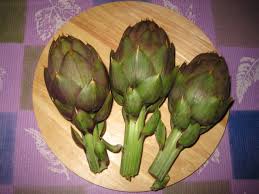 And here is a picture of what carciofini (literal translation: little artichokes) are. There are essentially the same as the cuori di carciofo (artichoke hearts), except that this version is sold in a glass jar with olive oil used to preserve them over a long period of time, and can be found in the supermarket in Italy: 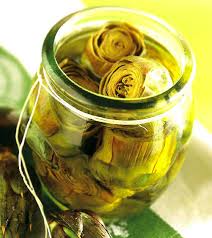 That pretty much sums up the whole story about artichokes in Italy.

Anyways, back to my original question:

(American English speaker here) To me, the picture of "fondo di carciofo" is a picture of artichoke hearts.

What you seem to call a heart, I call a baby with the outer leaves removed. Like this: 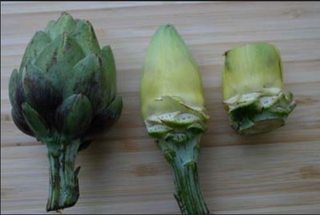 I don't think of that as a heart, I've always considered that a kind if a cheater thing since that's what you can buy frozen or marinated as "hearts". There is no, or very little, inedible choke: 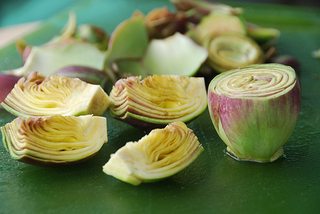 That's because the choke develops as the artichoke matures.

So if I asked for "baby artichokes", I would expect to get what is pictured above.

If I want what I think of as "heart", I would eschew packages labeled "artichoke heart", because I know that what they would actually contain (in the US) is trimmed baby artichokes.

I LOVE artichoke hearts, I try to get plenty of stem too. I'm talking about the bottom portion of the mature artichoke, after you pick off the leaves and scrape off the choke. 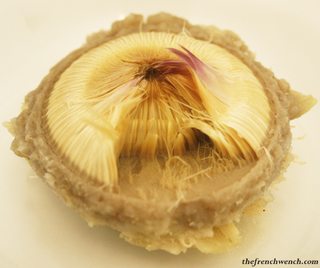 Which just has a small part of the choke removed.

On Food and Cooking supports this usage of "heart":

So, I guess "the bottom part of a mature globe artichoke, the base, what some people consider the heart and others call the bottom or even the crown, where the stem attaches" would be a way to say it in English and not be misunderstood. If, in fact, I am understanding the question.

I've seen the convex bottoms sold as "artichoke crowns" (separated from any tiny leaves or stem) on occasion but Alibaba sometimes lists them as "artichoke bottoms".

Thank you all for your responses. What I was able to conclude is that although the Italian word cuore translates into the English word heart, and while in Italian cuore di carciofo always refers to the inner leaves of an artichoke, the word artichoke heart seems to be used synonymously with artichoke bottom, artichoke crown, and artichoke base in some places, while being the equivalent of the artichoke heart translation from Italian in some other places where it still refers to the inner leaves.

The following images from the Internet make the aforementioned differences in word usage obvious: 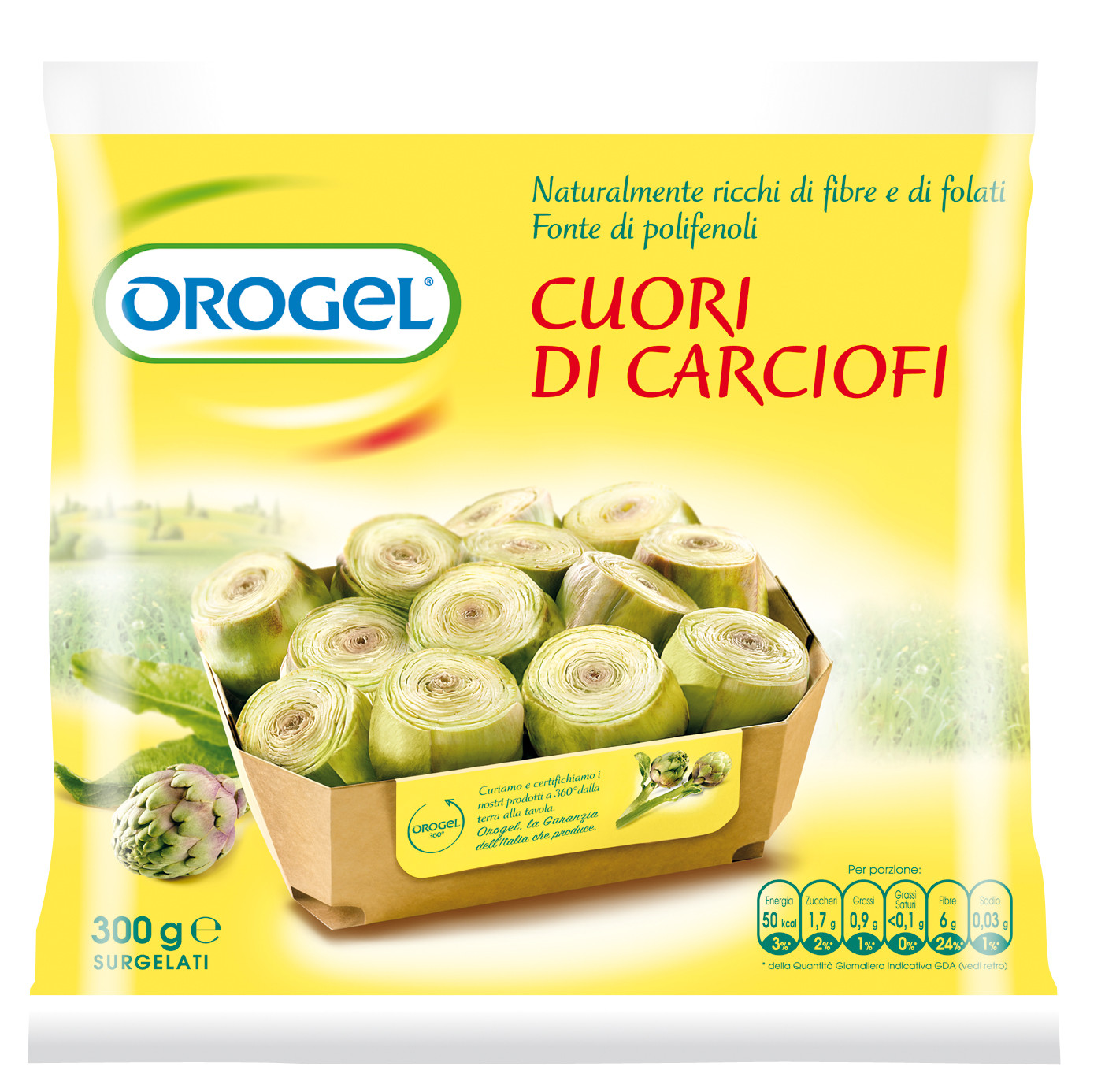 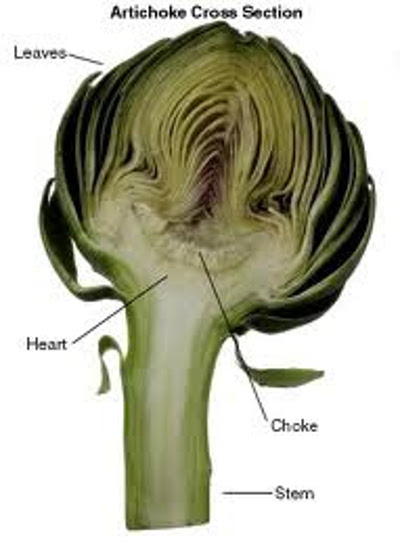 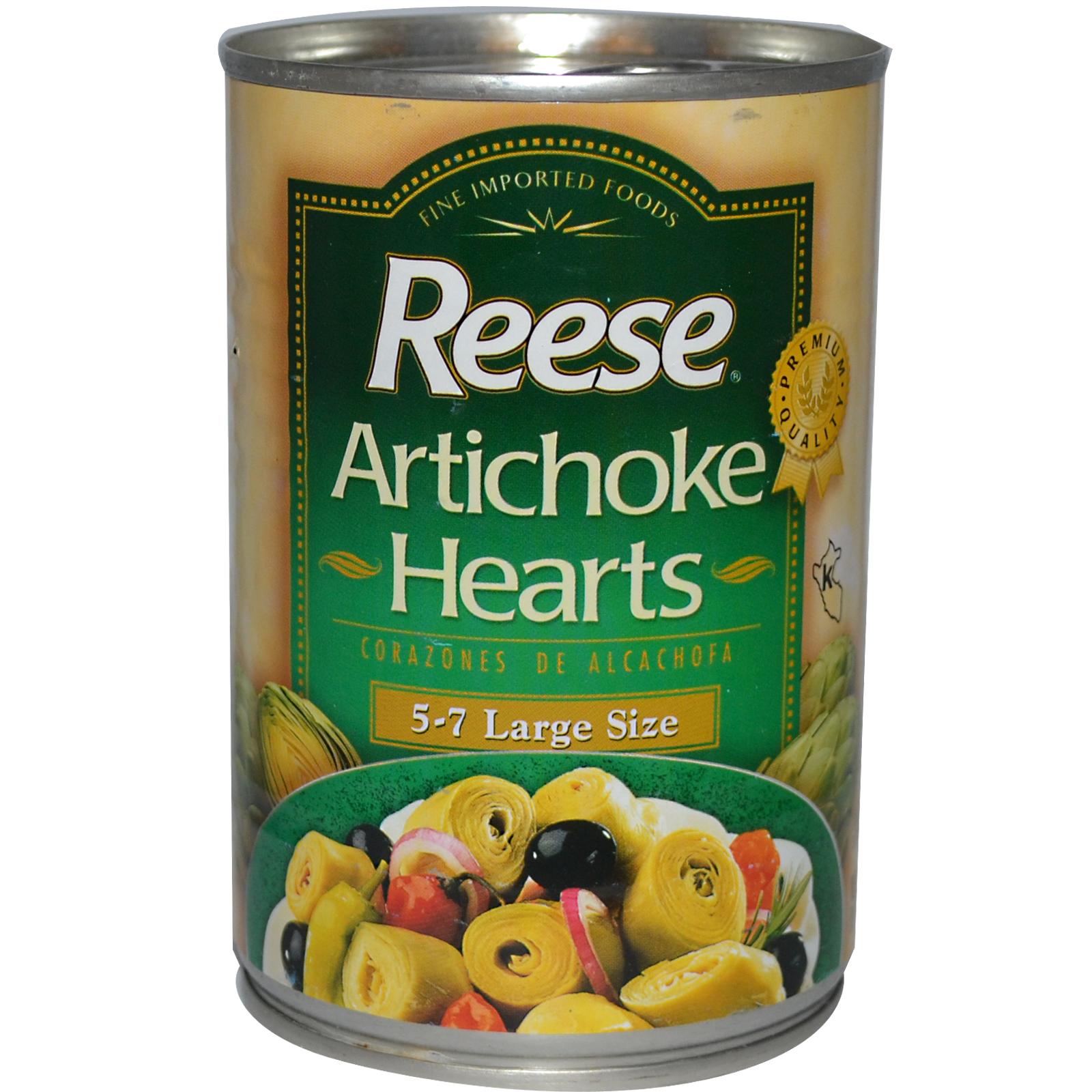 Needless to say, despite having used these images for illustrative purposes to show how these words are being used around the net, I couldn't resist making the statement that compared to fresh ones, packaged and canned artichokes are really gross, both as far as taste is concerned as well as when we consider health issues (all those added preservatives), and this is especially true of the canned ones which I would never ever buy and taste like tin!

Most Italians would purchase and consume artichokes fresh, although due to their popularity these are also available marinated and sometimes even grilled and then preserved in glass containers alongside olive oil and possibly other ingredients (the following picture was taken in an Italian supermarket and shows how several brands are normally available for consumption, each having a slightly different taste and preparation): 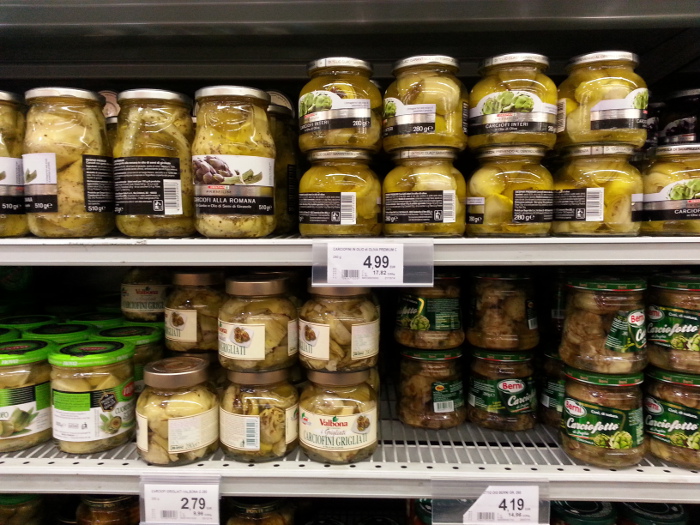 Although reasonably good tasting, this is however considered a somewhat lazy option when compared to fresh artichokes, which despite being a much healthier option are also cheaper to purchase. Here are the artichoke pictures from an Italian market as promised: as you can see, in Italy it is possible to purchase the various part of an artichoke separately (sorry that my camera battery was low while taking these pictures, which is the reason for the lines appearing therein):

Due to their size, the artichokes as in the picture above are known in Italy as mamme di carciofo (literal translation: artichoke mothers). The artichokes below are of a similar kind and were found at an Italian supermarket (sold in bunches of 4): 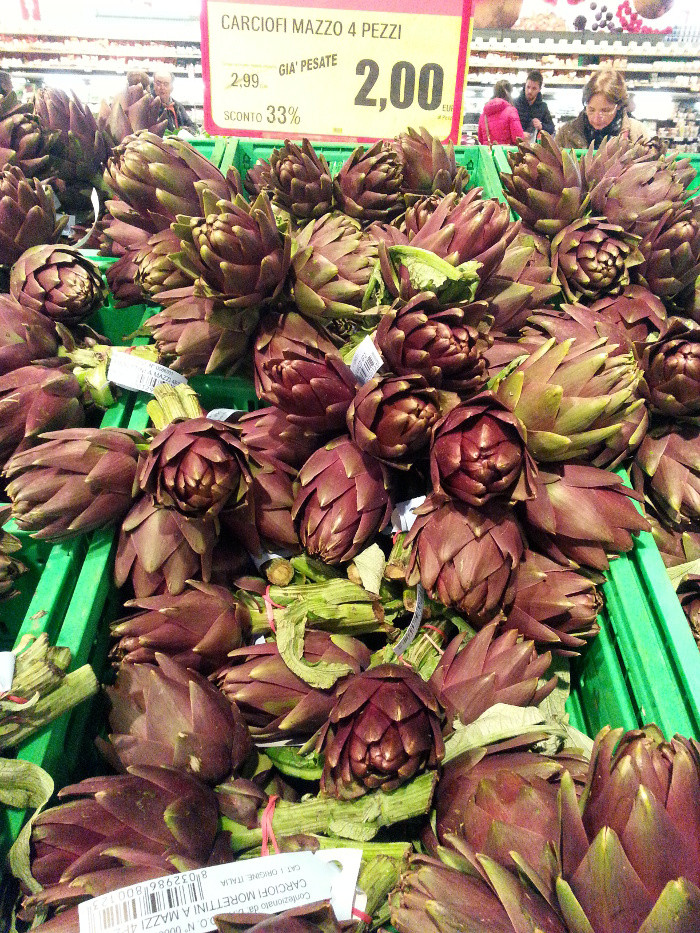 Not the answer you're looking for? Browse other questions tagged italian-cuisine language artichokes or ask your own question.