Fermenting Sauerkraut - Should I Stir?

I haven't done this for a very long time. I am following Alton Brown's recipe, which conveniently fits perfectly into a little hack-job of containers I already had. (Related: Why isn't glass ideal for the fermentation of sauerkraut?) @Athanasius' answer to that question led me to what I'm doing with this batch. At this point I feel pretty comfortable with it: 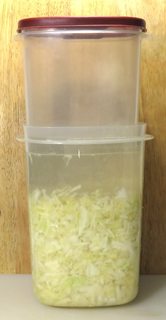 The two containers are identical, and I have a few inches of water in the top container so that it weighs down the cabbage in the lower container. It seems to be working pretty sweet. I'm three days in and it's starting to smell like something is happening. There is a funk in the air.

So far so good.

Now I am dying to stir it...to do something! Everything I have read (including Athanasius' answer) suggests that in a less awesome container I might have to stir, but now I don't necessarily have to do anything but scoop off scum which has yet to appear.

Is there a reason not to stir? Will stirring offer any benefit?

Well, having grown up near "the" Sauerkraut region in Germany - I'd say don't.

Honstly, I hadn't ever thought about why until today (can't have been only lazyness that my ancestors left the kraut in peace until done.), but:

Why making really sure to create a water-seal when you are breaking it with stirring? The kraut is supposed to ferment under the absence from air! You are supposed to check on the kraut regularly and even fill up with saltwater, if if the water level is too low. If even the smallest bit of cabbage sticks out from the brine, you risk mold.

Besides, I'd be afraid to drag something nasty into the half-done kraut (and I'm so not implying that your utensils aren't clean!).

I'm adding a detail from a classic fermenting pot: note the groove at the top which is supposed to be filled with water. The lid sits in this, ensuring the seal. The two stones are supposed to weigh the kraut down (what you do with the second plastic box). 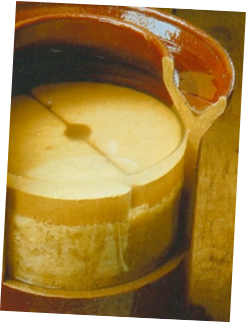 Exposing the sauerkraut to air is undesirable: we want an oxygen-free environment for the bacteria to do their work, and air exposure also brings increased (though small) likelihood of surface contamination (by mold for example).

I don't have a reference but I'm pretty sure that historically opening a crock to stir was not a thing.

And regarding your statement @jbarker2160 that sauerkraut

is also the favored environment of some really nasty bacteria

I'd certainly like more information about that claim if you have some. If anything I would think the opposite to be true. A high-salt and increasingly high-acidity environment is not friendly to most bacteria, which is why sauerkraut is hard to screw up. Considering that throughout history people generally would not have sterilized their equipment (or even had the means to do so) you would not have expected fermented foods to have caught on at all if it posed a significant health risk.

Correct me if I'm wrong, but to my eye it looks like there is a tiny gap between the two containers so the surface of the fermenting liquid is slightly exposed to air. Is that correct?

If so, you have an "open crock" apparatus where the surface is exposed to air. While "open crock" is a very traditional method (and Alton Brown seems unconcerned), as I mentioned in my answer to the question you linked, many people tend toward airlocks today to avoid some of the surface "scum," which could include mold or occasionally something less nice.

There are some who advocate mild agitation of the water surface in an open crock at least for the first few days (until the liquid turns quite acidic), which might prevent some molds from settling, for instance. But if you do have any contaminants in that surface layer, agitation also risks pushing them further down into the cabbage.

For that reason, I'd recommend against stirring, if by "stirring" you mean dipping something down far in and agitating the cabbage itself. The only thing that can come from that is contamination. You won't speed up the fermentation significantly. And there's no positive benefit to it. So, don't stir the cabbage.

If you want to agitate the exposed water surface slightly (which in your containers could just be lifting the top one up a bit and putting it back down), maybe it might prevent some "scum" from settling on the surface. But I don't know that I've seen anything conclusively showing that this would be better than simply skimming off any scum that might show up after you see it.

Stirring won't necessarily cause any safety problems or anything like that, but you'll change the flavor of the finished product(although the detectability of the change is debatable) due to the bacteria switching to making acetic acid(vinegar) instead of lactic acid in the presence of oxygen.

An occasional stir won't make a noticeable impact on the final product(probably), but make sure that you stir with a sterilized instrument since the type of environment that's most conducive to sauerkraut production is also the favored environment of some really nasty bacteria. Also, make sure that the brine level is above the cabbage when you are done.

Since stirring can only harm not help, leave it be!

Also, I agree that fermentation is the preferred method of preservation (other than freezing) to avoid spoilage by molds, bad bacterial, etc.

Botulism is so rare with lacto fermented veg as to be virtually undocumented. Basically if it doesn't have visible blue, black or green slime on it, and it smells good to you, it won't harm you.

My mother has a recipe that you have to mix in 2 to 3 days. The reason being as in a large quantity the centre can heat and rot. I just finished 17 large heads of cabbage in a 20 gallon crock. I mixed on day two. I could feel heat in the centre. I now leave till ready.

Not the answer you're looking for? Browse other questions tagged fermentation cabbage sauerkraut or ask your own question.

0
Are you supposed to stir sauerkraut while it is fermenting?
13
Why isn't glass ideal for the fermentation of sauerkraut?
3
What device should I use for pressing/fermenting
2
What's the worst that could happen when fermenting sauerkraut?