Does anybody use a vintage Pyrex percolator on their stove? Electric? Gas? Is it 100% safe? I just saw it in an old movie, which is what gave me the idea to look for one.

The Pyrex percolators I remember had a wire 'grid' or 'heat spreader' that was to be placed on the burner and then the percolator sat directly on that. If memory serves me correctly, they came in a variety of shapes. See below for an example. 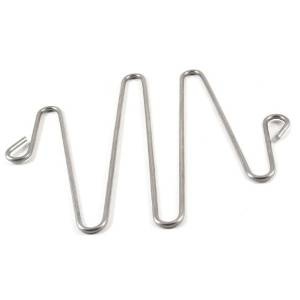 I have a couple of them, and have used them on both gas and electric stoves with no trouble. Using a heat spreader isn't a bad idea, but I have found no issues using them without. I do not even know how old mine are -- pre-1940s or not -- but either way, they work really well.

I think I have the definitive answer to this question. I found the Pyrex percolator at the Corning Glass Museum. It came with a metal heat diffuser. If you scroll through all the pictures (links to the other images are to the lower right of the main image), you’ll even see the paper sleeve the diffuser came in.

If you search the museum collection for glass percolator, a number of them come up and most have a metal heat diffuser in the full set.

We’ve been using our vintage coffee pot on an electric stove without a diffuser for a week. It hasn’t damaged it but we’re now using the diffuser that came with our Chemex coffee maker.

Not the answer you're looking for? Browse other questions tagged coffee or ask your own question.

13
What is the difference between coffee grinds/beans labeled as “espresso coffee” and ordinary coffee?
2
Frothing Milk: Variations by Milk Type?
6
What is a pressurized filter, and should I use it for my espresso?
5
Why does making instant coffee in the microwave taste burnt?
17
Are N2O and CO2 chargers interchangeable for culinary purposes?
7
Finding the Right Coffee Grind
1
What do I need to know about coffee machines and grinders to get started making good coffee at home?
2
Coffee in a rattlesnake recipe? Why?
2
Why is my freshly ground coffee watery?