How do I cook sticky rice/glutinous rice in my rice cooker?

I would like to try and recreate the sticky rice (aka glutinous rice or sweet rice) as I often find served in a kratip at my local USA Thai restaurant. I already have a rice cooker - the Hamilton Beach Digital Simplicity Rice Cooker and Food Steamer (on Amazon). I've cooked quite a few different long grain white rices and also brown rice, but have not yet tried sticky rice.

For standard long grain basmati rice I would just pop it into my cooker pot with the appropriate amount of water and press the white rice button. I have some concerns about the sticky rice as I have read that it requires a presoak upwards of 6 hours and I've also read that some rice cookers (Zojirushi) have a specific mode just for sticky rice. I've also read reviews on simple steamers for sticky rice, so that leads me to believe that I would actually have to use the steamer basket vs the regular rice cooker pot, but I'm just guessing.

Some related resources that didn't quite answer this question:

This lady is pleased with the results just using her one-setting cooker: Sticky Rice. Note, she says in the comments that she uses 2 cups (or slightly less) water to 1 cup of rice (which makes sense) not 3 cups rice to 2 cups water like it sounds like she is saying in the video. She rinses the rice well, but does not soak it.

EDIT: With things like this there are often "camps" of differing opinion. I doubt that Michelin Starred restaurants that include sticky rice on their menu ever use rice makers to make said rice. I am reminded of this: Turning regular noodles into no-boil noodles. Even though there are thousands of recipes online for making lasagna without boiling the noodles, I say pfftthhfft. Sure, you can do it, if you don't mind High School cafeteria food. (Remember the Church Lady? "Isn't that special?" Think like that.)

I am less of a connoisseur of rice than of baked pasta. That being the case, I'm not sure that I would notice the deficiencies of sticky rice made in a rice cooker. With that in mind, and assuming that you are not on a different stratosphere of connoisseur than I am, I recommend that you give it a shot and let us know how it goes.

Yet Another EDIT - I Tried It

I used this brand of sweet (glutinous) rice: 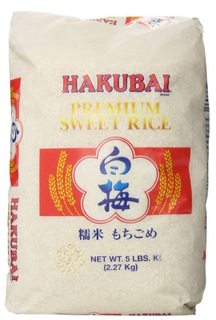 I used 2 cups of rice, thoroughly rinsed, 1 tsp salt, 3 2/3 cups water, and the only setting my simple, old rice cooker has.

My lid is glass, and I could see that there was still quite a bit of water on the top of the rice after the cycle was complete (short, 30 minutes or less), so I waited 15 minutes before I lifted the lid.

Since you can't see the rice without opening the cooker, I recommend that you do the same, wait 15 minutes before opening.

After 15 minutes I checked it out: 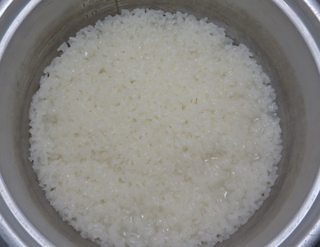 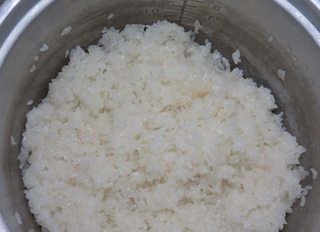 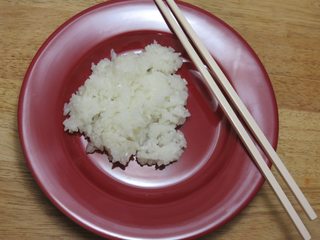 It's absolutely fine. Is it as good as the the great Thai place down the street? No. But it's close. The only thing I would (and will) do differently next time is to only use 3 1/2 cups water to 2 cups rinsed rice and 1/2 TBS salt.

After it finished last night, I was suddenly too tired to mess with it anymore, so I just left the cooker on warm, and went to sleep. 5 hours later, if anything, it's improved.

It was fine without it, but I'm intrigued by @GdD's answer here. Later, I'm going to try making the rice again with the above measurements plus 1.5 TBS sugar, just to see (more just seems like too much). Making sticky rice without rice cooker

Yep, that worked. It does brown a bit at the bottom of the rice cooker, but I like that. I enjoyed that as much as sticky rice from the Thai joint. It's not the same, but it's really good. So, there is my recommendation. Have fun!

The lady who made the video has responded to me on YouTube. She seems grateful and flattered. She had no corrections.

To answer your question: you can't... not really.

Thai sticky rice is cooked by steam and not by boiling and then steam like normal rice. Simply cooking a glutinous rice using the standard method is no more Thai sticky rice than a spud that I've crushed under my foot is a mashed potato.

The main difference is that glutinous rice has waxy starch and it will react very differently to different cooking methods than standard rice. Also, steaming allows dextrinization to occur throughout the cooking process instead of only at the end of cooking delivering a different flavor in the finished product.

The differences are not subtle if you use the traditional Thai method, however your mileage may vary.

you wash the rice until the water runs clear...that gets rid of any polish or patina or whatever the coating that develops is called so that the nice sticky starch of individual grains can join.

For a stick rice substitute I really just use jasmine rice with a little extra water...Not much, and not enough to make it soggy, just enough so that the rice isn't exactly "dry" when complete.

The rice cooker works by detecting that the rice is getting too hot, that's when it knows the water has run out and the rice is "done" if the right amount of water was used.

Before asking this question you should have looked at how it is done your local USA Thai restaurant and how it i done in Thailand. Not only the rice but the method is different. It is steamed, not boiled. Of course you can rig different appliances to do this but the Thai apparatus, suitable for stove top use, is the most authentic; unless you duplicate the steaming you will not come close.

Please check out the Hot Thai Kitchen You Tube, Pai is showing how to cook Thai Sticky Rice in rice cooker and another method she called it "Steam the Bowl". Her method is that you don't need to soak the sticky rice. Please make sure you use the sticky rice from Thailand. Quick-Fix, No-Soak Sticky Rice หุงข้าวเหนียวแบบไม่แช่ข้าว- HTK Tutorial https://www.youtube.com/watch?v=eMDwyqJy2r4

Not the answer you're looking for? Browse other questions tagged rice rice-cooker sticky-rice or ask your own question.

4
What types of rice are appropriate to use in a rice cooker?
2
Laotion (Thai/Viet) Style Sticky Rice, after making sticky rice do you knead the rice in something specific?
3
Whats wrong with my rice cooking process in my Zojirushi?
5
What are the crunchy bits on top of Thai mango with sticky rice?
2
How to make perfect pearl rice in a rice cooker
3
Rice Cooker Technology Best Suited for White Basmati Rice?
5
How to make Black Glutinous Rice sticky?
2
How can I make regular rice more sticky?