How can bitterness from dried mushrooms be avoided?

A couple of times I've made the mistake of adding the liquid used to soak dried mushrooms back to my broth resulting in a horribly bitter taste.

The top answers here and here make no mention of bitterness. Instead they say the liquid should be reserved and used to add mushroom flavor. This can't be the whole story.

Could it be that different mushrooms require different preparation methods?

Recently I have been using a mixture of porcini and funnel chanterelle. Previously, I only used porcini, so perhaps chanterelles are the problem?

I don't remember now but it's possible that I used boiling water so these claims sound plausible to me.

Does anyone know for sure whether bitterness depends on the type of mushroom or the method of soaking?

My advice: ditch the soaking liquid.

Here's what I just tried. I divided my dried mushrooms up into 10 bowls: 5 with dried chanterelles and 5 with dried porcini. I added equal amounts of water to each at the following temperatures 10°C (directly from the tap), 40°C, 60°C, 80°C and 100°C (or as close as I could get). 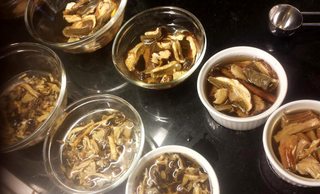 After soaking for 15 minutes I sampled the soaking liquid from each bowl.

All samples tasted astringent and bitter. Naturally the taste was less pronounced for the colder liquids, but not so much as I had expected. The liquid that the porcini soaked in tasted somewhat better than that of the chanterelles. None of the soaking liquid tasted good enough that I would add it to a stock; I was almost gagging when the experiment was complete.

I wrung as much liquid as I could out of the rehydrated mushrooms and used them to make a vegetable stock. With the flavor of the soaking liquid fresh in my mind I could still detect a note of bitterness. This was easily dealt with using a little salt.

The bitterness from the soaking liquid, I know from past experience, cannot be completely removed with salt.

Update: Looking at messages from an online forum here that deals with the same problem, I thought I'd look at some suggestions made there.

Mushroom dust is the cause of bitterness.

There was an amount of dust in the dried mushrooms I purchased. However, I rinsed the mushrooms before starting the experiment described above, so dust doesn't account for the bitterness.

Bitterness is due to bruised fruit that has oxidized before it dried.

I'm not 100% sure about this, but wouldn't bruising change the color of the mushroom? I didn't notice any discoloration. Anyhow this is a quality issue and I've more to say about quality later.

Water is the problem; use a water filter.

The water in Stockholm is neither chlorinated nor laden with minerals (I have had the same kettle for years and there's not a hint of mineral deposit inside). This is not the problem.

Mushroom quality is the issue. Use mushrooms that have been dried and stored properly.

Quality seemed like it could be an issue to me. My impression is that supermarket dried mushrooms in Stockholm don't have a high turnover and could have been on the shelves a good while. The mushrooms I used in the tests above had quite a lot of dust in their packages and that surely isn't a good sign.

Today I looked around for something of visibly better quality and found cloud ear and shiitake mushrooms in the local Asian store. These mushrooms look pretty good and their packages contained almost no dust. The dried shiitake were vacuum-sealed in a package together with an oxygen scavenger. 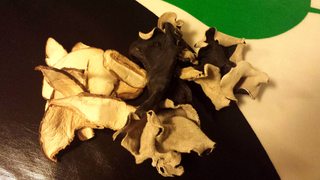 I soaked these mushrooms at 10°C and 80°C for 15 minutes. Cloud ear mushrooms don't have a strong smell and the soaking liquid didn't taste of much after soaking. The little taste I could detect was slightly astringent and not particularly pleasant. Incidentally, cloud ears don't rehydrate well in cold water and were still quite solid after soaking.

Dried shiitake, in contrast, have a strong musty smell and the soaking liquid was relatively strong tasting. I did taste some pleasant mushroomy flavors and for a time I had to weigh whether I liked the taste or not. Unfortunately these flavors were mixed with some definitely off tastes, among them the familiar bitterness. In the end I couldn't stomach more than three tablespoons of the liquid.

I had a notion that mushrooms soaked in cooler water might retain their mushroom flavor whilst leaching their bitter taste. To this end I drained the mushrooms that were soaked cold and added boiling water to them. After a further 15 minutes I taste tested again. Comparing this second soaking liquid to that of the shittake initially soaked at 80°C, the flavor was much more dilute. I'm sad to say that mushroom flavor is lost even when soaking cold.

My advice for now remains the same: discard the soaking liquid. If that strikes you as wasteful I would at least urge you to taste a tablespoonful of the stuff before you decide to add it to your broth.

My two cents worth from personal experience with dried mushrooms... There isn't a one-way-fits-all-mushrooms way to rehydrate dried mushrooms. Some need to be hydrated then tossed into a pan of boiling water for a few minutes before draining the water and adding the mushrooms to the dish being cooked, like Hericium erinaceus. Others like Shitake can be cooked once rehydrated. Also, never use the rehydrating water for cooking. There's no assurance of the hygiene/cleanliness of the places where the mushrooms were processed.

Not the answer you're looking for? Browse other questions tagged mushrooms broth or ask your own question.

19
How to work with Dried Mushrooms?
2
Preparing dried mushrooms for risotto