Why do patterns appear on tempered chocolate?

Sometimes, during a single session, spots and lines may appear on tempered chocolate. This seems to happen with the first third of production. 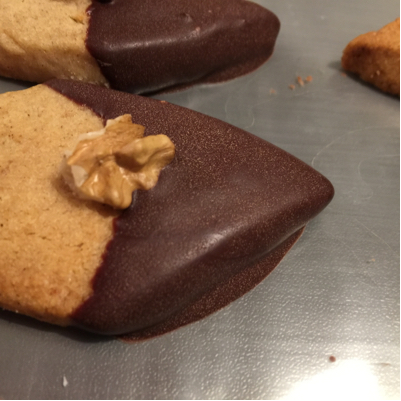 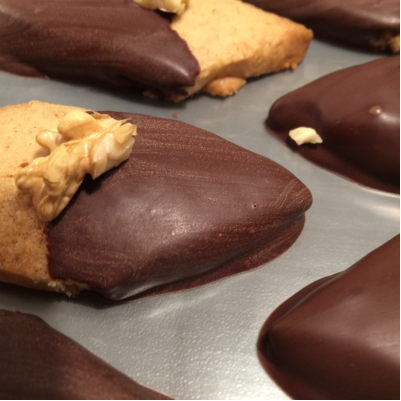 Chocolates produced later in the batch do not exhibit any pattern: 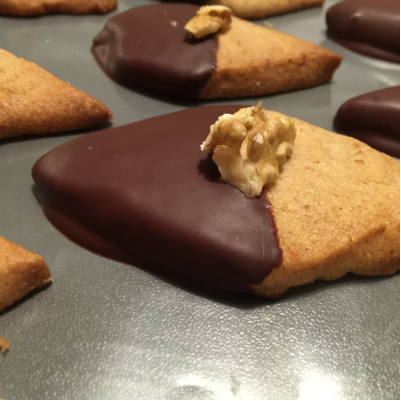 Why is that? How can this be prevented? Is it caused by poor tempering?

Chocolate is Valrhona 66% Caraïbe (but it happened with other chocolate of the same brand), and tempering was done by controlling temperature with water baths following a 52-55C / 28-29C / 31-32C schema. Chocolate was maintained at working temperature by periodic water bathing each time its temperature dropped below 31-30.5C.

What you're seeing is called chocolate bloom. It doesn't happen because of tempering, it happens in spite of it (or sometimes due to improper tempering).

Sugar bloom is pretty straightforward - it happens due to moisture exposure (e.g. condensation) causing dissolution and re-crystalizing of the sugar on top. You can easily check if you have sugar bloom by wetting your finger (just a bit!) and wiping the grainy/streaky surface. If it becomes smooth after doing so, then you got sugar bloom.

The other type, fat bloom, is more complicated, but ultimately it boils down to having different types of crystals (and specifically crystals that are not the beta crystals you want from tempering). It can happen for a lot of different reasons, but some of the most common ones are:

Unfortunately it's almost impossible to tell which specific problem occurred simply from looking at the end result. If it's any consolation, though, I don't think yours really turned out so badly compared to what can happen with bad tempering.

(Ideally this would have been a comment because it doesn't seek to replace the earlier comprehensive explanation about blooms) however I just wanted to make some specific observations about the fact that it's spots, lines and nothing in that sequence in your pictures.

It's interesting to note that the lines in image 2 are collectively oriented in the direction of likely dipping into source choc: I'd suggest that implies the blooming effect was triggered by some property at the surface of the chocolate being dipped into (which is then drawn across the surface as the biscuit is lifted). Perhaps it's seed sites of bloom crystallisation which are floating on the choc surface which are then drawn across the biscuit coating leaving seeding sites behind. Perhaps in image 1 the seed sites hadn't yet developed to be big enough on the choc dipping source surface but there were enough small ones in the mix to be distributed across the surface of the biscuit after removal. The fact that it is then absent later on suggests to me that the seeds for the bloom were no longer present, begging the question why..

Now it's impossible to be clear about the cause without more information (a video of the process might let us be scientific about it ;-) but would leave us very hungry) - if we think it's water from moist environment then we need to consider why the line pattern wasn't across from the get-go and what in the circumstances changed to make it disappear by image 3.

Perhaps it's related to the subsequent water-bath warm ups to keep the choc workable.. could it relate to a change of temperature in the choc source or a change in the humidity in vicinity of the temperature controlled water baths used to melt the chocolate? There might also have been some other unconscious change in physical handling of the chocolate - perhaps a stir of the choc part way through dipping which turned over the seed points from the surface, churning them into the body of the remaining choc where they changed state and melted?

My guess is that the repetitions of warming up were better for the overall tempering and early on it the choc wasn't quite ready for dipping for some reason.

Anyway, I hope that's some food for thought when next handling the dipping choc. Let us know if you discover ways of intervening with the choc-lines.. it looks to me like something going on at the surface of the dipping liquid which disappears with water bath reheating..

Not the answer you're looking for? Browse other questions tagged chocolate melting-chocolate tempering or ask your own question.