Why does adding salt to microwaved broth make it foamy?

I had a nice bowl of clear yellow chicken broth which was not salted. It was in a serving bowl when this happened. I poured the cold unsalted soup into the bowl and then microwaved it and it came out clear still. To make it more palatable, I added a small spoonful of salt and the below happened. It only became frothy after I added the salt. It was much 'foamier' when I first added the salt, then it slowly subsided.

What is causing this? 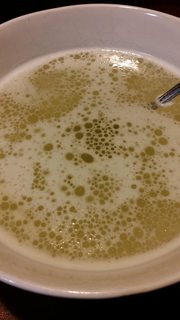 There are likely two or three things happening.

When clear liquids come out of a microwave, it is quite common for it to froth as soon as you put something into it. A spoon, or crystals of salt or sugar forms nucleation sites for over-energised water molecules to make vapour bubbles. Water forms vapour at any temperature, not just at its boiling point.

In conventional heating, convection starts from the layer closest to the heated bottom of the pan and the hottest liquid always rises to the surface and there is plenty of movements in the liquid body. In a microwave energy goes into the water molecules directly and the container is heated by the energiesed liquid, the opposite of conventional heating. There is very little time for convection currents to develop. Molecules within the body of the liquid that are excited may not find sites to form vapour and become locally superheated. Vapour pressure above the liquid may be actually less than what it should be at that temperature until the body is disturbed. Lots of tiny vapour bubbles are released when disturbed. They look foamy until they escape from the liquid. This is the most likely cause.

Salting out of proteins could be another cause, though probably less likely. You would probably see a layer of scum on the surface that would not disappear.

Emulsion breaking. Heating and addition of salt will encourage any emulsion to split. From your picture, there is plenty of oil around. There could have been some oil droplets suspended in the water phase of the soup. These could clump together at the start of emulsion breaking giving a cloudy appearance before floating to the top as a continuous layer. Not likely either.

5
Why did my coppa get spicier after being microwaved?
8
Why did my vinaigrette emulsify so quickly?
3
Why does flatbread have to be microwaved / cooked / toasted?
2
How can two pies made and baked identically have differing flavor qualities?
1
Vegetable Broth/Stock from Kirkland Organic No-Salt Seasoning
3
To salt or not salt broth for use in recipes?
0
Microwaving M&Ms produces sparks
3
How/Why Does Broth Burn?
1
How to make microwaved porridge thicker
0
Why does adding salt to the water keep your eggs from exploding?