Is pasteurized milk safe to drink?

The word pasteurized is written on the milk packets (like the ones shown here). They have a use before date.

Assuming it's been refrigerated the whole time, and it's still before the use before date, is it safe to drink the milk straight away from the packet? Or does it still have to be boiled to kill bacteria and make it safe?

Pasteurized milk is the standard way milk is sold in industrialized countries. How it's packaged can depend on the country but it's perfectly safe to drink provided it's consumed by the "use by" date.

Pasteurization is a heat-treating process:

Pasteurization (American English) or pasteurisation (British English) is a process invented by French scientist Louis Pasteur during the nineteenth century. In 1864 Pasteur discovered that heating beer and wine just enough to kill most of the bacteria that caused spoilage prevented these beverages from turning sour. This was achieved by eliminating pathogenic microbes and lowering microbial numbers to prolong the quality of the beverage. Today the process of pasteurization is used widely in the dairy and food industries for microbial control and preservation of the food we consume.

Pasteurization is the reason for milk's extended shelf life. High-temperature, short-time (HTST) pasteurized milk typically has a refrigerated shelf life of two to three weeks, whereas ultra-pasteurized milk can last much longer, sometimes two to three months. When ultra-heat treatment (UHT) is combined with sterile handling and container technology (such as aseptic packaging), it can even be stored unrefrigerated for up to 9 months.

This means that most of the microbes in the milk are killed and the milk is perfectly safe to drink right out of the carton. In fact, there are many jokes in the US about chastising teenage boys and young men about drinking directly from the carton/jug of milk.

Milk in the US is regularly consumed direct from the gallon jug, see the note under Vitamin D that says "Pasteurized & Homogenized": 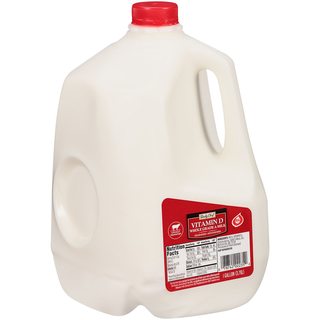 Milk in Europe is often in Tetra Pak cartons which don't have to be stored in the fridge until opened and generally have a longer shelf life due to the UHT handling (see definition above): 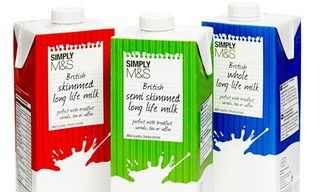 Good answer above covers most; but a couple points.

Not the answer you're looking for? Browse other questions tagged milk or ask your own question.

4
Which container to use for combined milk?
2
Frothing Milk: Variations by Milk Type?
6
Can I pasteurize milk using a microwave?
17
How can you recognize cold milk that has gone bad or is about to?
3
Is sterilized milk safe to use with a breadmaker's timer function?
2
Use of sour milk for bread making - how long after the expiration date is it safe?
2
Does near expiration date milk continue to "age" in a cooked dish?
3
Is the milk spoiled when a thin layered textured appears in the bottom of pan?
16
Why did this gallon of milk stay fresh for so long?
0
Shelf-Stable Milk is it still good