I love lobster but I must admit I am not very good at cooking it. I want to make this easier on my self by just adding the lobster to a flavorful broth. I've heard in the past that if you are going to boil lobster for best results you should purchase the lobster alive and keep it alive until you are ready to toss the lobster into the vessel of hot liquid.

Now the question at hand. I've been told that if you just toss the lobster into the hot liquid, the lobster suffers and tenses up making the meat chewy. Is this really true?

The two methods I've heard of prevent this.

First: Get the lobster drunk with alcohol.

If these methods actually work, which one is better and why?

If the alcohol method is better, which alcohol should I use?

Oh yea, I want to keep the lobster whole and intact for presentation reasons.

The way fish (shelfish included) is dispatched impacts both its flavor and texture. The Japanese have a long history of this knowledge. This type of fish killing is called ike jime.

Dave Arnold did some interesting research on this. You'll find it here: http://www.cookingissues.com/index.html%3Fp=5731.html

Bottom line: How you kill a lobster does impact its flavor.

Does cooking a lobster alive alter the flavor/texture?

Is there any truth to the claims that lobsters don't feel pain?

Absolutely not. They feel pain just like you do.

Does killing a lobster before cooking alter the flavor/texture?

Are there other ways to kill a lobster so it doesn't suffer the horrible pain of being boiled alive?

An alternative, if you don't mind having the carapace damaged, is to bisect the head vertically just before cooking. I made this diagram to instruct my coworkers on the technique. 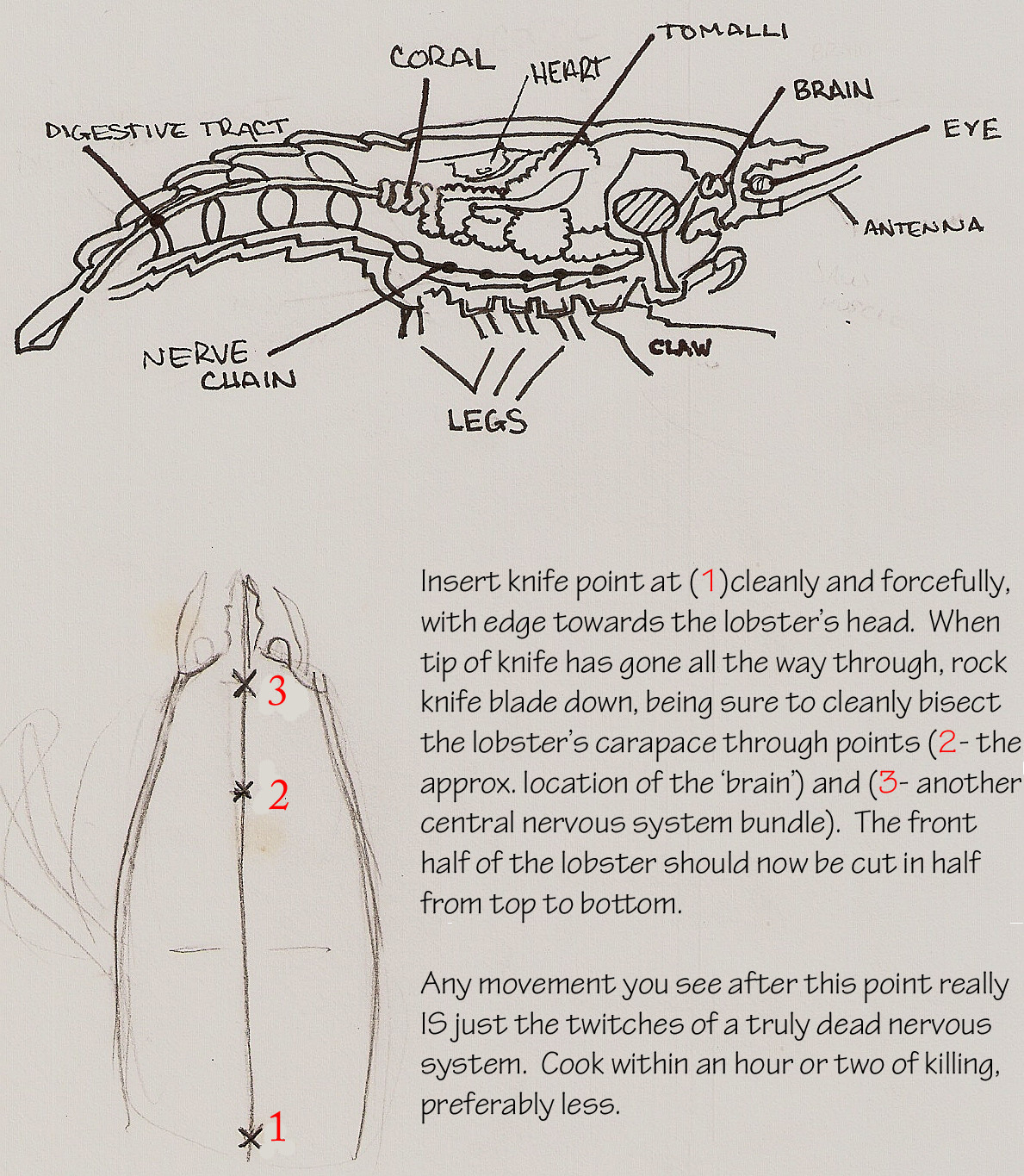 Assuming you can get fresh lobster, you definitely should keep it as fresh as possible prior to cooking. Generally, that will mean keeping the bug alive until it's cooked.

I haven't heard of this effect myself, and if it's true, I very much doubt that it's due to the lobster "suffering". If anything, it's probably just that a vigorous boil applies too much heat too quickly, overcooking the lobster (which would definitely make it chewy and less pleasant).

Freezing the lobster accomplishes two things, then. First, it raises the total amount of heat energy required to cook it, offsetting the high heat and providing a slight buffer against overcooking. Second, the chill stuns the lobster, making it easier to handle and less likely to react vigorously when handled or exposed to its imminent doom.

I've never heard of getting lobsters "drunk", and as @rumtscho points out from comments, their metabolism is so significantly different from mammals' that alcohol likely wouldn't have the same effect. (Side note: we don't actually even have a complete understanding of ethanol's effect on our own brains, much less on lobsters'.) You could submerge your lobster in a solution of ethanol, which would force it to absorb some, but that might very well poison the critter instead (alcohol is toxic even in humans in sufficient concentration, after all). I would advise you not to waste your precious booze on what is basically a giant sea bug, especially not to test such a dubious proposition.

Not the answer you're looking for? Browse other questions tagged freezing boiling alcohol fresh lobster or ask your own question.

37
Which method of killing the lobster would cause the least pain and distress?

77
Cooking away alcohol
3
How do you cook frozen Lobster Tails?
4
Lobster, steamed Saturday afternoon, eaten Monday night?
2
Question on freezing lobster meat
0
How do you tell whether a lobster is cooked?
0
Alcohol evaporation
3
Can I get drunk by evaporating steam of alcohol?
37
Which method of killing the lobster would cause the least pain and distress?
1
Calories in alcohol-based sauce brought to boil (bourbon chicken)