I'm going to get a hand-hammered, round-bottomed wok through the mail in the near future. Trouble is, I have a glass top stove inside, so that's entirely off limits—not to mention completely useless in terms of heat output even with a wok ring. Thanks to the great Alton Brown, I was introduced to the wonderful idea of using a turkey fryer burner for this task. As I searched around, none of the burners that I could find (and I searched well) had the same wok-friendly design as the one AB used:

Notice the lack of any horizontal bars. The two-ring design works perfectly for this purpose, allowing the wok to sit comfortably in the center. However, I could not find a single burner that looked like that.

Could anybody point me in the right direction for a similar burner?

Welcome! Instead of searching for a turkey fryer burner, do a Google search for a propane wok burner. You will see that there are many to choose from and they are designed for just this purpose. Some even come with woks.

Not sure if cost is a factor for you but this is one of the cheapest I saw, $53 at target.com. 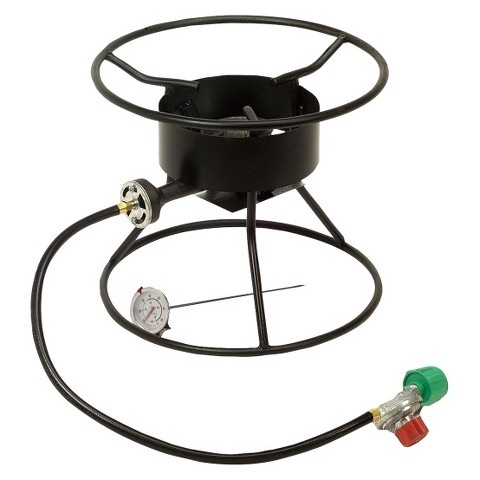 There are many types with different btu output and designs. Good luck with your search.

(wrote this up in the middle of the night, and then forgot to submit it ... it still might be of use, though).

I can't point you to that particular design, but I do know of one that might work:

It has a few design flaws**, but the way that the base unit is designed, there's four steel loops that don't actually meet in the middle. I suspect it would work well to keep the wok centered.

It has some disadvantages (it's larger and heavier, as it's a two-burner unit), but the extendable legs would bring it up to a more useful height for cooking on.

** and then the list of flaws that I noticed:

I haven't actually used the grill portion yet. I need to take a better look at it to see if the closed lid (which latches shut so you can carry it by the lid's handle) holds the cast iron grill grates down so they don't flop around when carrying. I also have no idea how well it cooks, or how well it deals with grease dripping.

Not that this is a direct answer to your specific question, but it may be a solution. A cast iron wok has a flat base, though the inside is still nice and wok round. It's a good marriage to glass top stoves. I use mine all the time.