Occasionally I'll get a clove of garlic that has small brown spots on it. When there are a couple spots, I cut them off and use the rest of the garlic. Sometimes there will be A LOT of spots and clustered together. Those will get thrown away. The garlic will look and feel fine until I remove the white "skin." It really looks like the garlic has eczema or measles. Does anyone know what these spots are? Is this a form of garlic mold? 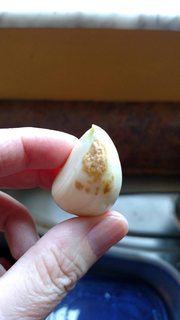 The brown spots can be a bruise from handling or a bruise caused by heavy soil. We learned the hard way to avoid planting in heavy clay. Loads of brown spots from cloves trying to swell against hard soil, or a rock or buried root etc. The bacteria get into the bruised clove and quickly discolour it.

We added lots of compost and tried to make our garlic patch soil the lightest, fluffiest texture possible. The softest soil produced the cleanest bulbs. Also far less bruising from harvesting since they pull so easily out of the ground.

Most of the websites I found say that the brown spots are a sign of the garlic going bad. The excerpt below from wikihow echoes what most say about it.

Check over the clove for any brown spots. Usually if a small spot you can trim off and the garlic is still good. If two or more spots, just pitch it in the trash can and get another clove.

IMO, its just minor bruising. I rarely discard it unless its really pronounced, or more than, say, 20% of the bulb's surface. The one in the pic? I'd mince it right up with the others.

If the garlic is otherwise firm and not discolored inside, I just cut away and discard those surface brown spots. So far in my long life this has caused no ill either to me (health) or to my cooking (taste/texture).

Not the answer you're looking for? Browse other questions tagged garlic or ask your own question.

6
Why is my garlic brown and slightly translucent?
2
Garlic brown spots, safe to eat the rest of the bulb?

22
Should one always use the whole garlic clove?
13
Garlic Powder vs Garlic
3
Shaking Method for Garlic
6
Why is my garlic brown and slightly translucent?
2
Garlic brown spots, safe to eat the rest of the bulb?
2
Can you use pre peeled garlic to make black garlic?
4
Why when I add garlic to an existing flavor base with veggies, it rarely gets golden brown?
6
Garlic powder clumps up
2
Quality of Garlic