I was thinking of making this tofu-/seafood-stew, but I am having some trouble getting a couple of ingredients for use in the initial stock - namely the dried anchovies and the kelp. A friend suggested that I should just make a stock of the heads and shells of the shrimp used later in the recipe, maybe with some soy sauce or anchovies in oil added in, to get that umami flavor mentioned on the Maangchi-website. If so how much should I use of the various ingredients, and should I clean out the shrimp heads in some way before attempting to make a stock from them?

Some ingredients more effectively transfer flavor to stock in dried form than in fresh or pickled form. Mushrooms, kelp, fish and shellfish are examples of those types of ingredients.

You won't find an exact substitute for them, but they do keep for a long time, so it doesn't hurt to keep them on hand.

However, Japanese and Korean cuisine have many variations of stock starting from various combinations of dried ingredients. Although obviously Japanese and Korean taste preferences are quite different, it may be instructive to look at similar ingredients used in similar ways to see if you can adapt to what's available in your region.

Dried shiitake are used in some Japanese soup stocks, but years ago I noticed the similarity of aroma between smoked, dried katsuo (skipjack tuna) and dried porcini mushrooms, which may be more available to you in Norway. I was rather surprised to find that it was a rather compelling substitute for katsuo. There is some overlap between that and dried anchovies, though it won't be as close of a match.

Dried anchovies and dried sardines are as iconic as a source of flavor in Korean dishes as dried katsuo or dried sardines are in Japanese ones, so you won't get an exact result by substituting, but you may find a compelling enough alternative.

You may find locally dried fish that would help produce an effective stock. Stockfish, or dried cod, may be a reasonable local substitute in Norway. I would expect its flavor not to be as distinctive as dried anchovies, though.

However, you should do your best to find dried kelp, because the only reasonable substitute for that is MSG, which is purified to the point that the natural aromas of kelp are lost, so the flavor won't be as nice. It was quite reasonably priced, though, even when I was a starving student in Germany, even though it took a bit of effort to track down.

An inadequate but passable substitute for kelp may be a touch of MSG and simmered green cabbage. Cabbage is one of the few vegetables that old rural Japanese preparations didn't necessarily expect to be prepared in a soup stock, because it does a nice job of creating its own when simmered gently.

Some substitutions I would suggest to get that similar umami taste that both these products provide and are similar would be: 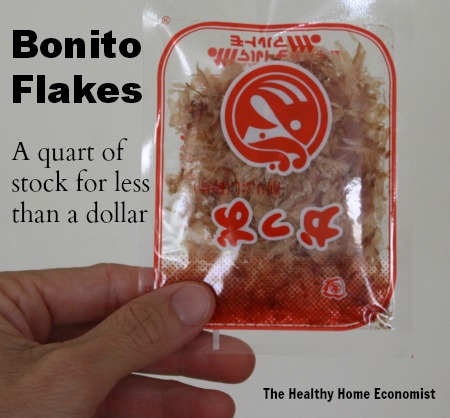 Not the answer you're looking for? Browse other questions tagged substitutions korean-cuisine or ask your own question.