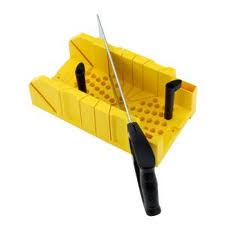 My household really likes things like turkey and ham sandwiches for lunch.

One thing I've searched around for is a 'manual' meat slicer. I'm thinking of something like a miter box like one might find for woodworking. Basically it would be a device that holds a serrated knife in a frame, and allows the meat to slide along in increments in order to achieve consistent slices. Does anyone know if there is something similar for slicing meat? (I know that electric meat slicers are available; but do I need yet another electric appliance?)

Personally, I don't have any problems with just using a knife. But others in the household lack slicing proficiency.

Addendum For those who have suggested that I get knives...I have great knives and have no problems in using them; and like I said above, it's for others in the household who are not proficient.

Anyway, it looks like there is nothing like what I visualized even on google searches. I added a picture of a woodworking miterbox in case people don't know what that is. Of course a knife would replace the saw and you probably wouldn't have the angle cuts; and it would be tailored so that you could slide the food item along incrementally for even slices.

I'm going with an electric slicer. The item I envisioned does not exist.

Update: The housemates are happy now. They're computer geeks and love gadgets. They can now slice up their own ham and turkey to their hearts' content.

The slicer takes up space, but will pay for itself in a few months. We were getting deli slices for $8 - $10 per pound. Now I can get frozen turkey breast for ~ $3 - $4 per pound, roast, slice, and freeze the excess for future weeks.

I know it's for vegetables but you should be able to trim the meat into a size that you can slice with a mandolin. I haven't tried it myself but if you get on that has no blade guard it should work great.

There are knives that have a built in distance measure (sorry, non-native speaker - don't know the correct word for it)

See here for an example 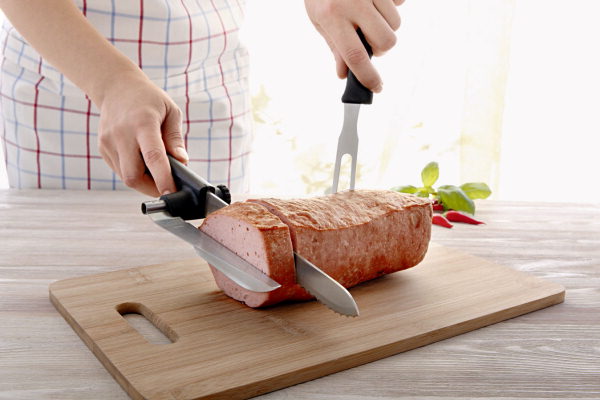 I don't think I've ever head of a kitchen tool like that.

Home slicers have really come down in price, but there's still the storage issue.

I'd suggest investing in a good knife and practice making consistent slices. Knives store better than most gadgets and good knife technique is well worth the investment.

You'd want a 10-12" knife so that you can make long smooth strokes.

There are also special knives just for slicing tasks. Like this Wusthof Roast Beef Slicer

If you have a local deli, it's at least worth asking to see if they'd cut your meat for you. The worst they can do is say "no," right? You may also want to ask around to see if someone in your neighborhood already owns a home deli slicer, whether manual or electric. Maybe you could just borrow theirs now and then?

Unless the people who aren't proficient with knives are children who you don't want using them in the first place, I don't think you're going to find something for a reasonable price that takes up reasonable space, etc...

If their knife skills are really so terrible that they can't cut a slice of meat, why don't you just spend a few minutes with them and help them improve?

If they are kids, then maybe you should just cut some meat for them in advance - like twice a week just slice up a bunch of meat for sandwiches.

By the way, I don't know if it would work, but maybe a standing box grater's largest holes would do the trick for medium sizes pieces of meat.

Get a miter box like the one in your picture. Using a knife set the black cam clamp in the holes to make a slice of the required thickness.

Slice. Remove slice, slide the stuff up until it hits the clamp. Repeat.

Manual meat slicers exist, but they look nothing like what you've pictured.

Like the electric motor slicers with the big spinning disk of a blade that you see in the delis, there are also hand-crank versions. (never used one, but saw one at an auction house yet, but couldn't bid on it, as the auctioneer said she was going to keep it for herself)

They're not very common, and searching for 'hand crank meat slicer' yielded most pages that also included 'vintage' or 'antique'. They also show up on eBay or etsy for $50-150. (there's one eBay right now, and some electric models, including one that folds up for storage)

Not the answer you're looking for? Browse other questions tagged equipment cutting or ask your own question.

7
How to properly sharpen Santoku and any other knife using a water sharpener/Japanese whetstone?
1
What can I use as a manual hard cheese slicer?
9
"Universal" aka "Bristle" Knife Blocks: Blade Damage and Hygiene
5
How Old Is My Meat Slicer?
7
I'm not looking to learn a new skill; how do I make my knives better at cutting?
18
Is it bad to be a 'board tapper', i.e. to tap your knife rhythmically when you're cutting vegetables?
2
How do I best cut florentines from a finished (baked) baking tray?
0
What blender is required to create an emulsion?