What causes congealed bacon fat to have a wrinkly surface?

Earlier this week I refrigerated some rendered bacon fat in a small metal prep bowl, for later use. Today, after making bacon again, I went to add more grease and saw a surprising texture on the surface of the congealed fat (click for full 2592x1456 resolution): 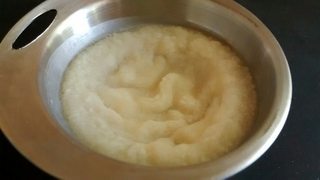 If it's not clear from the picture, the surface is very wrinkly, with the edges significantly raised---it looks like it expanded unevenly as it solidified, but this would seem to indicate the presence of water. Water and fat, of course, don't mix and it looks totally homogeneous.

I've stored bacon fat plenty of times before and it always had a smooth surface after solidifying---schmaltz tends to be a bit less smooth but still a flat surface. When I look at pictures online, such as in this blog post, I also see nothing but smooth, flat fat.

I don't think I did anything different this time. I've used these metal prep bowls and I've used glass bowls. Does the way it solidifies say something about the quality of the bacon, how the fat was rendered or how it was stored?

It has been in there for 3 or 4 days and we haven't had any earthquakes or step-dancing parties.

Here's the same 60 mL prep bowl with more fat from the same package of bacon added this morning, on top of the older fat, after sitting for ~30 minutes in the fridge---no longer wrinkly! This seems to rule out the particular batch of bacon as an influence. 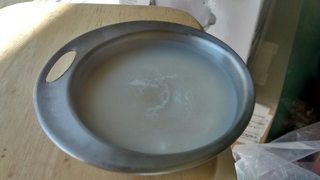 Even though you strained your fat while it was hot there is still micro-particles of bacon proteins left in the fat. These particles hold their heat longer than the rest of the fat as its cooling, and rise to the top, and as it solidifies create the texture and slight color change.

Great pan of precious fat you have. To answer your question, fat and meat contain air and water. When the water and air evaporate the fat will move.Those spaces that do not fill in will be wavy.

Not the answer you're looking for? Browse other questions tagged fats bacon or ask your own question.

16
Is bacon fat supposed to congeal at room temperature?
5
Food Timing: Keeping Bacon Warm While Cooking With Bacon Fat Made from Said Bacon
5
Substituting with Bacon and Bacon Fat in a Recipe
5
Rendered pork fat vs lard vs bacon fat?
3
What are the bubbles on the surface of cooking bacon?
5
Should I pour off the liquified fat while cooking bacon?
3
Why isn't the beef fat in my chili melting?
11
Cooking Buffet-style Bacon
1
Bacon fat producing solid white and gelatin state
8
What's the difference between "English" & "American" bacon?