Seasoning skillet: What am I doing wrong?

Since two months I have a DeBuyer 28cm skillet from the Mineral B line. Upon buying it I followed the instructions they gave me in the store: Wash it, fry (without oil) a thick layer of salt and oil it up before putting it away. This gave me a light brownish seasoning.

In the weeks after buying it I used it a lot, mainly for sautéing vegetables. Every time I used the pan the seasoning became darker. But every time I washed the pan (no soap, just hot water and a plastic brush) part of the seasoning would fall off.

After about two months I decided that there must be something wrong with the first layer of seasoning. So I used soap and a steel brush to remove all the seasoning it had. Then I heated it slowly and with a paper towel I brushed in a small amount of oil in thin layers, until the pan started the color and smoke. I did this 3 times.

Today I fried two burgers in the pan, thinking this time I had seasoned it properly. I warmed the pan for a couple of minuted on medium heat and put the burgers in with a dash of sunflower oil. Unfortunately, the seasoning came off exactly at the places where the two burgers rested (see photo.). Though nothing came off while cleaning the pan.

What am I doing wrong? 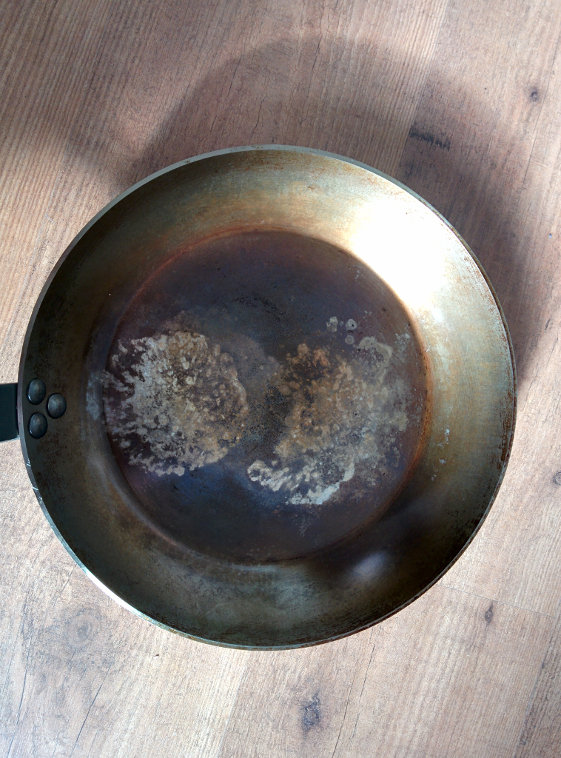 It simply takes some time and experience to learn to do a seasoning well. Yours was too soft to work. The good part is that you can repeat it on the same pan until you got better results, the pan is not going to suffer from it.

First, there is the oil. Modern oils are engineered to be higher in unsaturated acids. This is done for health reasons, and some sources suggest them for seasoning specifically because they polymerise more easily, for example recommending flaxen oil for seasoning. In my experience, while it is much easier to create a good looking layer with them, this layer is way too sticky and soft for use. Personally, I prefer to use a sticky oil as the base layer, and put a few layers of lard on it.

Second, there is thickness. If a layer was too thick, it will peel off. A good seasoning is built up from many layers, each as thin as possible, and hardened separately, with full cooling down in between. If you can see thickness in your layer (the thickness of a standard office paper sheet), it's already dangerously thick. Wipe each layer before hardening, you don't want to see it pooling.

Third, there is temperature control. If this is your first iron pan, you might not have learned it yet. A new seasoning tends to be more damageable than an old, baked-on one. If the first few foods stick, they may "take off" some seasoning with them. I guess that, if you're good at frying precisely, you can start doing more adventurous stuff in the pan right away. But if you are not, better start with the kind of food which you know how to fry without it sticking. For example, this picture looks like you put lean burgers at too low a temperature and they cooked onto the seasoning instead of crusting right after hitting the pan. If you have a food you know you can crust well, use it (I do new pans best with crepes and scrambled eggs, but it needs the correct recipe, Ruhlman's crepes work). If not, start with greasy types of food with sufficient protein content and work from there. Introduce watery foods later, when the seasoning is doing well. Also leave starchy foods for later - although they work well enough if there is enough protein and some fat in them, see the crepes point above.

In the beginning, you might also want to not wash the pan. Simply wipe off excess fat with paper without introducing water. Of course, this is somewhat dependent on the success of the last point - if you have pieces of food stuck to the pan, it becomes harder to deal with them (a salt scrub can work better than water though). In the ideal case, the food peels off your seasoning without leaving anything to clean.

I also failed my first tries to get a pan well seasoned. But I also noticed that, the closer you get to a good seasoned state, the easier it gets, simply because each of the points is easier to follow through when you have less sticking. The beginning may be hard, but once you get in the positive feedback part of the process, it's worth it.

If you can, I'd suggest seasoning it in the oven—at least for the first few layers.

It sounds like you got it good and clean, and maybe even roughed up the surface a little before seasoning. Good.

Prepare the oven with both racks. Put foil on the lower rack to catch any oil dripping from the pan. Set the oven to 450°F, no need to wait for it to preheat.

Heat up the pan stovetop (but not so hot the oil smokes). Wipe on a thin layer of oil (you may want to hold the paper towel with some tongs); put in the oven, on the top rack, upside down (with the cooking surface facing down).

Once the oven finishes heating (now with the pan in it), bake for an hour. Then turn off the oven, allow the pan to cool in the oven.

If, after cooling, the seasoning is at all tacky, bake it for another hour at a higher temperature. How high you need seems to depend on the exact oil you're using.

To put another layer on... repeat the entire process.

[As an alternative to heating on the stovetop, you could heat it in a moderate oven.]

You're gonna be fine. Keep cooking with it and those burger imprints will go away. You need a stiff nylon dish brush to clean with hot water. Then dry the pan after cleaning by placing it on a burner on low heat. When completely dry use a paper towel with a good teaspoon full of shortening. I use Spectrum Organic shortening which is exactly like Crisco but is not trans fat. You want a "solid at room temp" shortening product. The shortening will stick to the pan and season it. Best to hang the pan in a rack in the open air. Or keep it on the stove top. Not stacked in a cabinet to rust and stain. You need to use the pan often and have patience as this will take a few months to get to the point where you can say it is seasoned properly.

Not the answer you're looking for? Browse other questions tagged seasoning-pans or ask your own question.

3
Should i oil my cast iron pan before storage?

19
What is the purpose of using potato peels for seasoning a cast iron pan?
0
hardened residue after high heat cooking (carbon steel and cast iron)
3
How to maintain a smooth seasoning on carbon steel skillets?
0
de buyer mineral b carbon steel seasoning
3
Seasoning refuses to stick to carbon steel pan. Tried various techniques
4
Skillet rust (?) and next steps with regard to seasoning
17
How do I fix improperly seasoned cast iron pans?
0
Best practices for seasoning cast iron, currently getting mild food poisoning
18
Seasoned Cast Iron NOT being Non-stick