How to replicate this bakery's bread

A local bakery is going out of business and they sell the most delicious bread. The pretzel bread is my favorite. All of their loaves tend to be heavy and dense, they stand up well to slicing, and the bread is soft and chewy when you bite into it. Any advice on how to try and duplicate it? The owner told me that the bread is made completely by hand, that was the only thing he would give away. The loaf of pretzel bread that I bought today weighs 1 pound 12 ounces. 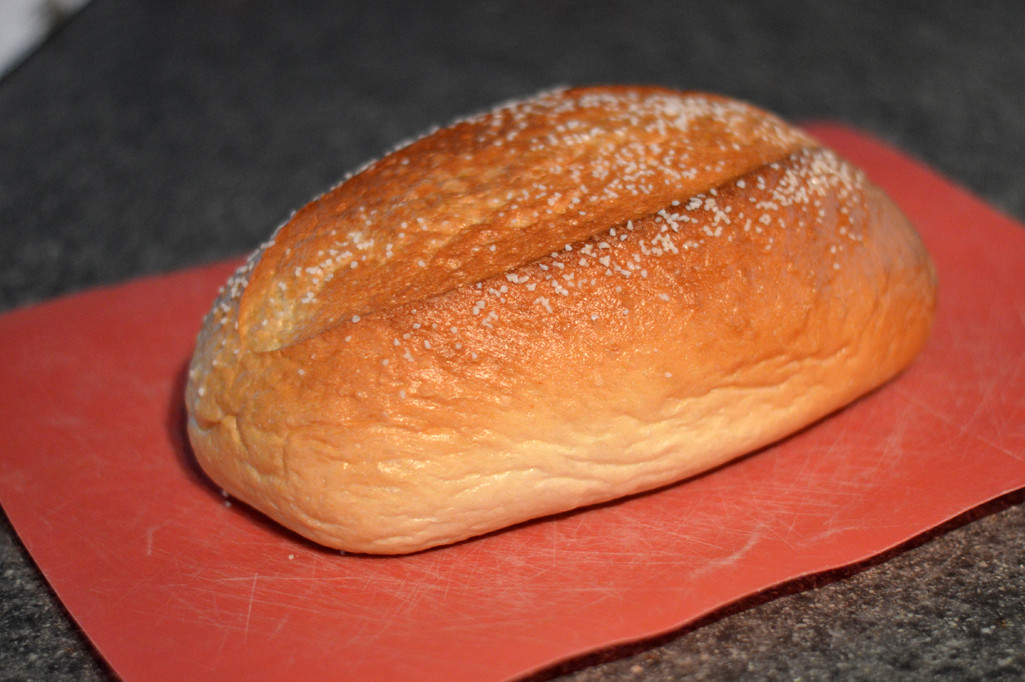 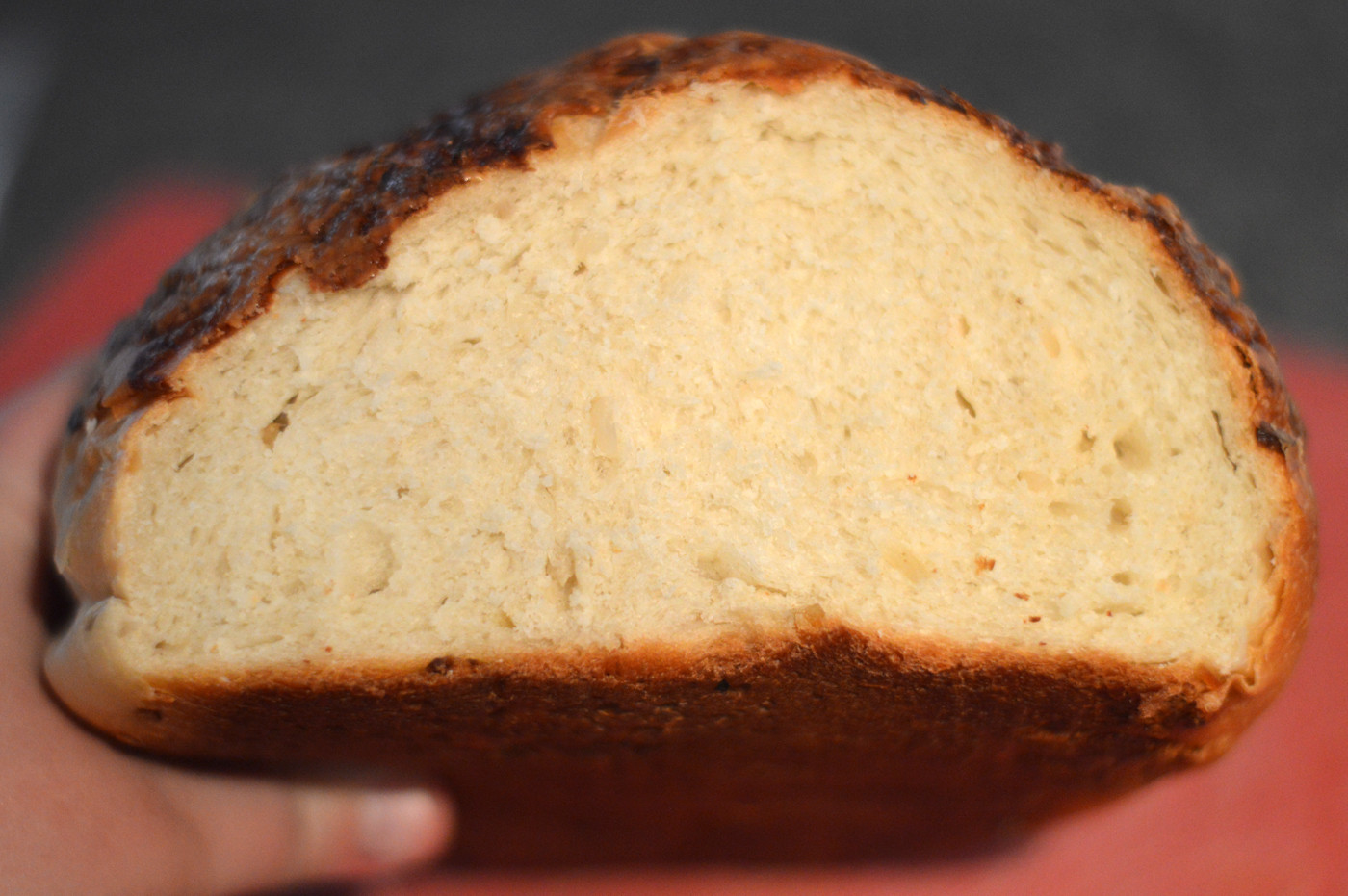 If it's pretzel bread, it may be dipped in a hot soda solution before baking, or lye for the brave and very, very careful. That would mostly be about the crust, rather than the density.

Several sources suggest baking baking soda (sodium bicarbonate) to convert it to (food grade) sodium carbonate for a stronger (than bicarbonate) alkali without needing to find (or handle) food grade lye (sodium hydroxide.) What is easily available varies by region, what you are comfortable using varies by person and over time. Washing soda is sodium carbonate, but is not food grade.

There are many ways to get dense bread:

This has the looks of a heavily enriched bread. Being dense is only a side effect of this. The taste people like in enriched bread doesn't come from being dense, and if you tried any other method of making it dense (e.g. using whole flours), you'd be disappointed.

Look for recipes which use sufficient milk, fat and eggs, and try these. Although lots of fat will make it tender, not chewy. But maybe you didn't mean "chewy" as in gluten-chewy (typical for bread, gets reduced with fat) but as in doughy (turns slightly sticky when compressed).

From the looks of that loaf, most of its enrichment comes from milk, with some egg, but not too egg-heavy (will be easier to tell if you say the picture was correctly white balanced). It possibly has sugar too, but not very much of it. I'd have to touch and eat it to know if it has more fat added than what comes from whole milk. Try a standard milky recipe, or maybe a Rosinenkranz without the raisins and 1/3 of the sugar.

If you like the crust's chewiness, that indeed comes from the lye in a pretzel bread. I don't find soda to be an adequate substitute, you need much higher pH than that. It may be easier to first try to replicate the crumb properly and once you're OK with that, start experimenting with bathing the crust.

If you are a novice baker, you should 1) also learn the correct process of breadmaking (to spot bad recipes which cut corners and can't replicate properly made bread) and 2) learn correct yeast ratios. Most home recipes use awful amounts of yeast. Especially with the kind of crumb you want, too much yeast won't work well. 2% fresh or 0.7% dry is plenty (that's baker's percentages, 2% means 2 g per 100 g flour, not per 100 g dough), lower goes too. Enriched bread can take some more, but I wouldn't suggest it for dense crumb. If the recipe wants more, still use only 2% and disregard their proofing time suggestion, proofing until it has doubled its volume in each phase.

The one thing which has me somewhat puzzled, as mentioned above, is that this results in a bread which is very tasty and has the look you photographed, but is not what I'd call chewy - as Stephie called it in a comment, "Muerbes Brot", which is an adjective normally connected with shortbread pastry crusts which fall apart in the mouth. If you find it insufficiently chewy, but everything else is all right, try with with somewhat stronger flour (I assume you are from the US based on the way you use the term "pretzel", so you should have access to various strengths of bread flour), maybe even bagel flour, or add gluten to your flour. But I'd start with standard bread flour (~12% gluten), that will already make it chewier than the European versions, they use AP flour.

Update I baked the Butterlaible Stephie suggested in the comments. I wish I could share with her the rep I'd get from this answer. It's a visual match at least. It's certainly dense, and while not "chewy" by my standards, it's also not as tender as some other enriched breads. 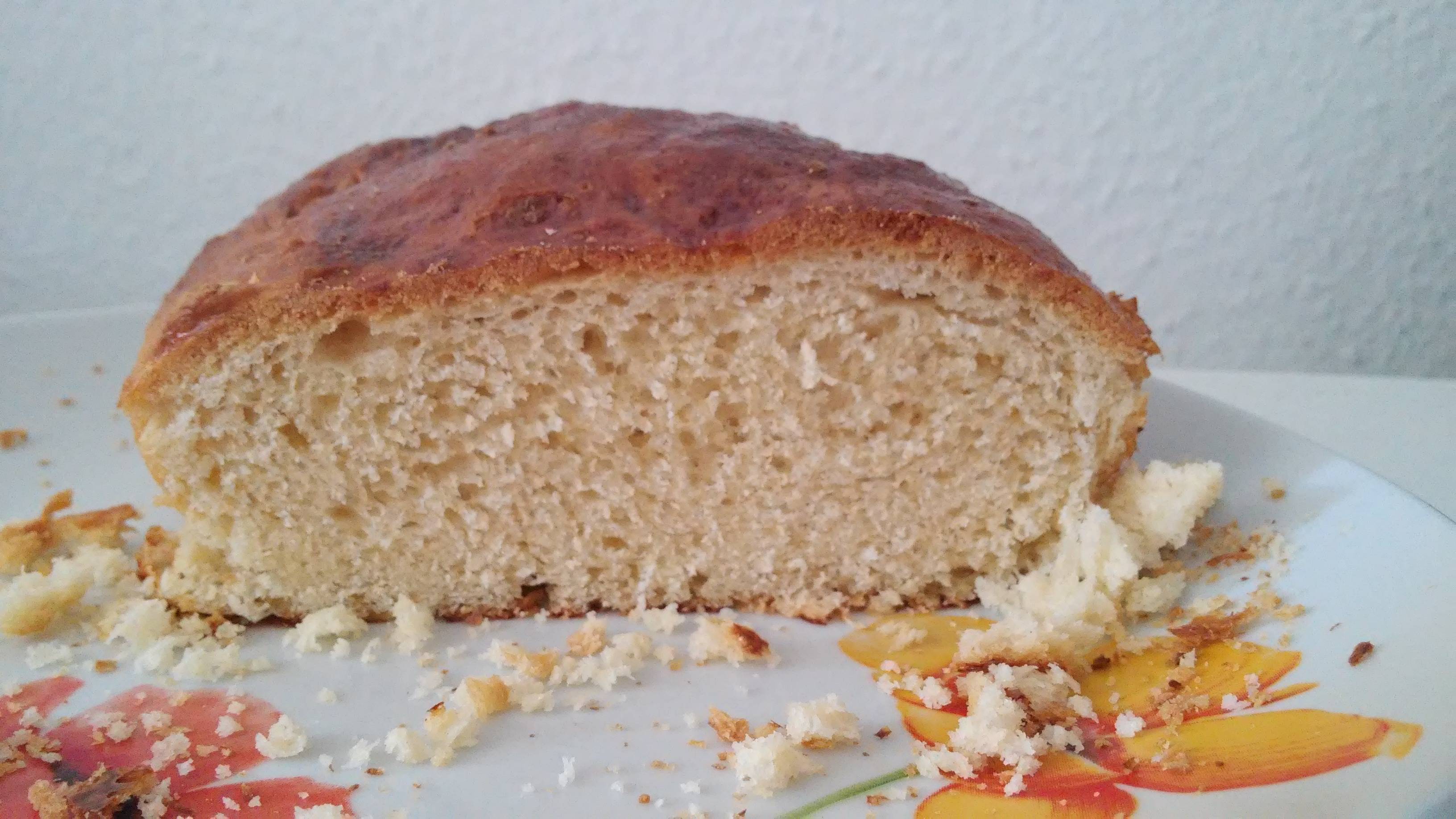 Verdict: it's certainly a good place to start and see how well it matches. If it is a good overall match but missing some detail, you might want to ask another question for this one specifically.

You mentioned in the comments that the bakery used to be a Breadsmith franchise, and it is likely that the owner simply continued using Breadsmith's recipe. Here are the ingredients for the pretzel bread listed on an old (Google-cached) version of Breadsmith's website:

Here is a recipe that I found that has most of the same ingredients in similar ordinal proportions:

The only difference is that this recipe contains milk instead of water, canola oil, and sugar. If you are fine using milk, then I would suggest trying that recipe. If not, here is a rough approximation of water/canola oil/sugar proportions to match the water/fat/sugar content of a cup of whole milk:

I would also recommend warming the water, dissolving the sugar in it, and then blooming the yeast in it. The sugar will help feed the yeast.

That recipe doesn't include dipping the bread in an alkaline solution, though. Here is a good recipe that explains how to do it.

Not the answer you're looking for? Browse other questions tagged baking bread restaurant-mimicry consistency or ask your own question.

7
What is a substitute for milk when making ham balls?

3
How to replicate Cerelac at home?
10
Is sourdough more resistant to mold than other breads?
1
Why does the crust of a freshly baked loaf of bread become less crunchy/hard over time?
2
Artisan sourdough bread
5
Bread is not rising
9
Why is my baguette type bread coming out almost flat?
6
bread dough always too sticky