Should I flip a roasting chicken in lieu of having a rotisserie?

I feel that besides the crispier skin, one of the benefits of using a rotisserie is that the filling (herbs, garlic, etc - but specifically liquids like lemon) will coat the entire inside while the bird rotates, instead of just "sitting still at the bottom" during roasting.

I should add that the chicken won't be sitting in liquid, I use a modified version of this recipe, which may make a difference when answering.

I am aware of this question about rotisserie beef, which is about why a rotisserie is better, but does not seem to address how one can get closer to a rotisserie style chicken in the oven. Tim's answer is related, but assumes the chicken is sitting in liquid, and mine will not be.

There are two general approaches to making chicken juicy in the oven. The first is to cook a short time at a high temperature. For example, Barbara Kafka's recipe for roast chicken calls for cooking the chicken at 500 degrees F for less than an hour.

The second option is to cook at a low temperature for a very long time. This recipe calls for cooking for an hour at 250 degrees F, with a high heat sear at the beginning and end of the time. Even more extreme is this recipe, which cooks at 140 degrees F for 4-6 hours. However, low heat will not give the yummy crisp skin.

Neither of these requires flipping the chicken.

However, if you really want the crispiness of the skin, flipping is the way to go. Two recipes from Cooks Illustrated (one and two) both call for high heat and a couple of flips. (As does Barbara Kafka's recipe for cut-up chicken, which I make all the time. Season the chicken, and put in a 500 degree F oven for 10 minutes, flip, 10 more minutes, flip, and 10 or more minutes or until the skin is crispy.)

If you want to go with the classics, Julia Child's recipe for roast chicken from also calls for turning the chicken onto different sides. She also bastes frequently, although the above recipes don't call for it.

There are two other methods (not mentioned in other answers) to roast a chicken evenly without a rotisserie.

Removing the backbone and laying the poultry with skin up, breaking the sternum (breastbone) pressing with the palm of the hand.

The roast is faster and even. All parts of the poultry will cook to the same level (making the breast more juicy), and more of the skin is exposed. 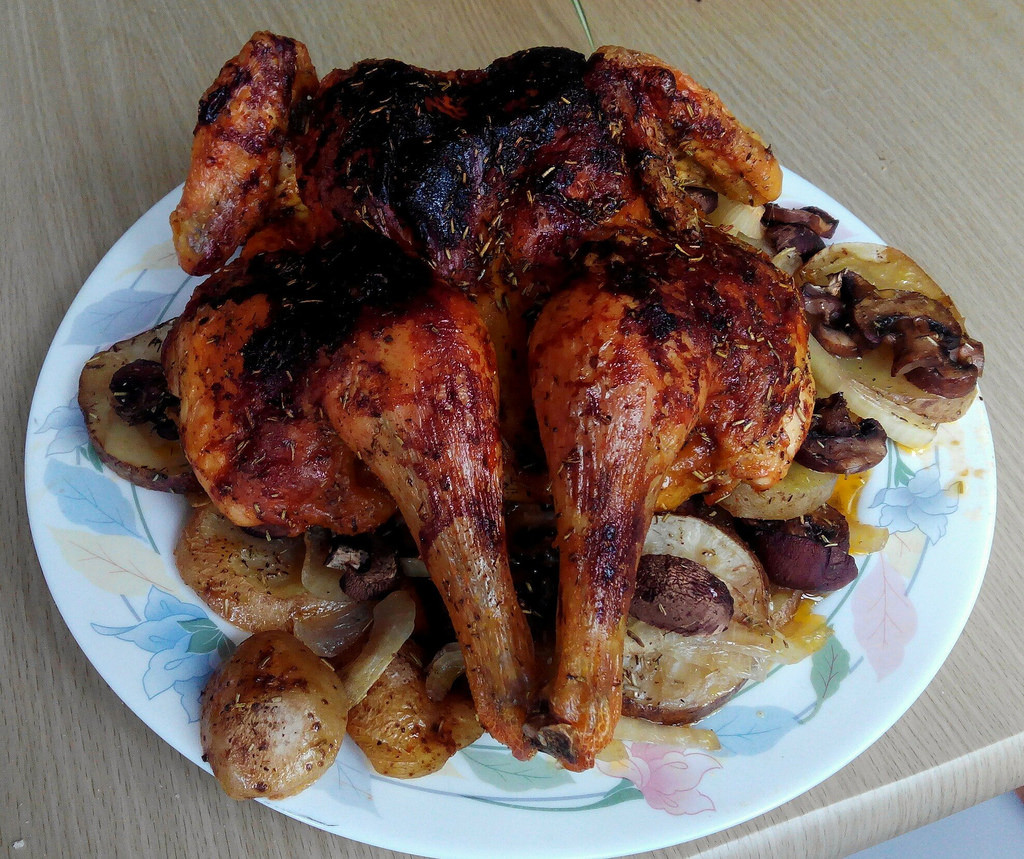 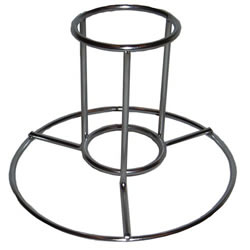 I'd baste it regularly - that's essentially what rotisserie is doing, continual basting. Have a pizza stone or something similar in the oven to reduce the loss of heat from opening the door.

I have done at least one roast chicken recipe where I started the chicken wrong-way and flipped it right-way mid roasting for crispier skin. It definitely makes a difference. The recipe I used, which I don't have access to, changed temperature part way to keep the breast from getting too dry.

For succulent roast chicken you should try a chicken brick, they give amazing results and with one it is virtually impossible to mess up the roast, they are essential IMHO.

Not the answer you're looking for? Browse other questions tagged chicken oven roasting or ask your own question.

7
Baking chicken - temperature vs time
4
How does roasting beef in a rotisserie compare to doing so in a regular oven?
8
Should my chicken sit in liquid as it roasts, or not?

7
How to bake a chicken?
8
Should my chicken sit in liquid as it roasts, or not?
10
How can I roast chicken bones (without meat)?
1
Broil pork chops before roasting?
2
Chicken texture: Store Rotisserie v. Pressure Cooker
3
How do I make rotisserie chicken less moist?
1
How to achieve a crispy skin when roasting a chicken?
0
Advice on rendering schmaltz
0
Will lemon in a cast-iron pan with roast chicken cause problems?
1
Cooking liquid in oven turns crispy skin soggy