What is the history of souvlaki and is there any benefit in cooking meat on a skewer?

I'm wondering about the origin of souvlaki. Was it only something of a convenience (easy to cook lots of pieces together)? Or does this way of grilling lead to better results, as opposed to just placing the pieces on the grill? If the latter (at least for some type of meat), how is it justified that it leads to better results (e.g., small pieces, rotating)?

Also, you would expect that puncturing the meats makes it easier to lose its juices, but it doesn't seem to be the case.

Historically, the practice of skewering meat had several advantages over building a rotisserie and cooking a single large piece of meat. Think about the advantages of cooking over a primitive camp fire, rather than a modern grill:

These days there are some other more modern advantages like:

Puncturing the meat prior to cooking does not cause a large loss of meat juice during the grilling process. Maybe if you removed the meat from the skewer immediately after taking it off the grill you would lose more juice than had you never skewered the meat at all, but it's not like the original puncture will expose the center of the meat and allow everything to spill out. Leaving meat on the skewer to rest will be as effective as grilling a single unpunctured piece of meat.

When you say "place the pieces on the grill", you seem to be missing the concept that a lot of kebabs aren't actually grilled on what we call a "grill" in America (and a lot of the world)... meaning a open surface like the one you posted an image of: 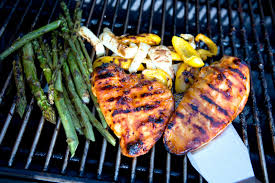 When I've seen "grills" they are simply open coal spaces with a rack for holding the skewers, so the meat is suspended directly over the coals and the skewers are required for holding them up. Here are some images of this sort of grill.

This one's a really old style: 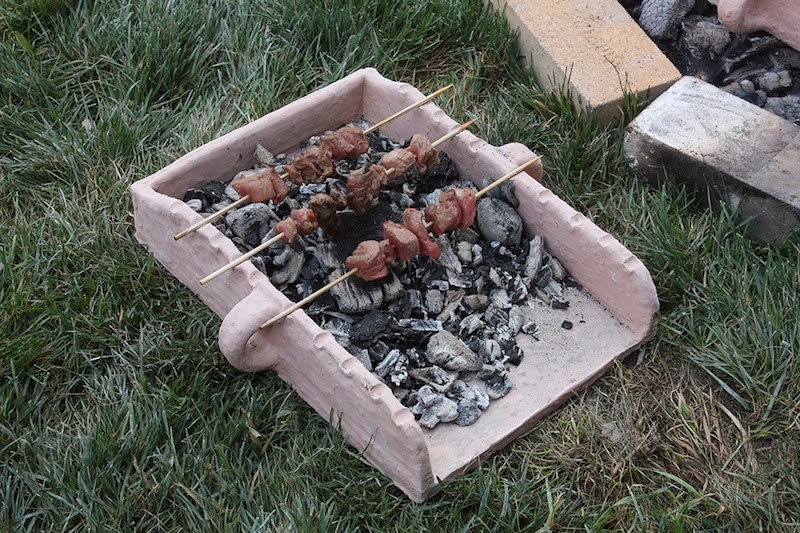 The ancient Mycenaeans have a reputation as palace-builders and warriors, but they were also quite sophisticated cooks. More than 3,000 years ago, they used portable grill pits to make souvlaki and non-stick pans to make bread, new cooking experiments suggest. [...]

The Mycenaeans left behind amazing palaces and gold-littered tombs at sites like Pylos and Mycenae, but in these places, archaeologists also have found less glamorous artifacts, such as souvlaki trays and griddles made from gritty clays.

The souvlaki trays were rectangular ceramic pans that sat underneath skewers of meat. Scientists weren't sure whether these trays would have been placed directly over a fire, catching fat drippings from the meat, or if the pans would have held hot coals like a portable barbeque pit. The round griddles, meanwhile, had one smooth side and one side covered with tiny holes, and archaeologists have debated which side would have been facing up during cooking.

This one is mechanical and will actually turn the spits for you while it cooks: 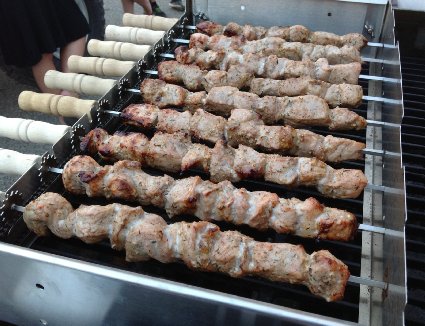 So, as you can see, without the sticks, you'd be putting the meat directly in the coals, and no one wants that!

Not the answer you're looking for? Browse other questions tagged meat food-science grilling barbecue skewers or ask your own question.

6
What fuel (burning material) gives the best flavor to meat when barbequing?
8
Does chopping steak negate the benefit of using better meat?
4
What is the correct way to make "Brazil style" BBQ meat?
5
How do I make sure that the meat cooks well and yet stays juicy on a bbq?
1
How effective is the George Foreman grill in draining fat from cooking meat?
7
What are the best type of skewers to use for ground meat kebabs?
2
Cooking meat directly above the flame of a gas stove
1
What are the downsides to "low and slow" when cooking meat?
76
Any benefit to buy high-quality meat for a mediocre cook?
13
Is there any advantage to cooking steak on the bone?