Is it advisable to season a chicken with salt after having brined it?

I've used a standard 5% salt and water solution to brine a chicken, after having brined it is it advisable for me to season the chicken with salt before cooking it? I'm worried that if I do so that the chicken may become too salty; am I wrong in thinking this?

If it is the case that the chicken CAN be salted after brining; what concentrate of brine would be needed so that salting is not necessary after brining? 7%, 10%?

No brining nor seasoning will make your chicken too salty. 5%, 7%, 10%, The only sodium saturating process known to men is the injection, the needle injection, the so called "added solution".

If you're only brining, you're miles away from needle injection consequences, yet another misunderstood process. Brining is not to be feared, injections is.

Edit (after all these comments/questions showed up):

Brining is a complex subject which I cannot address here, and a lot of myths are floating around, mostly related to nuances, while people do not understand the enormous impact of:

You can debate this thing for days and years, but what matters here is the question. The assumption is "I marinated (5%) a chicken and now that my marination is over, I'm thinking of seasoning (salt) before cooking. Am I running a risk to saturate the end product with sodium?"

The clear answer is NO, as long as your brine didn't last weeks, or your meat was not previously injected with a sodium solution, e.g 12% or 15%. The only time you have to worry about salt seasoning is when your meat has already been salted with injection, or if you just managed to cook a peace of meat with a higher than 5% salt solution for more than a week, which won't happen unless we are talking about dried cured meat, which is an aberration as I've never seen it.

Please be careful with references to articles, books, so called scientific published papers. You really need to read them slowly and carefully, interpretation is key, understand where they came from, who wrote them, who paid for it, who's getting paid for it, which is the source, ... etc, even if the almighty gods of molecular gastronomy are named on it.

I agree with @rumtscho that you should not need to salt after brining. However, I totally disagree with the accepted answer. There are simply too many reputable sources that say otherwise, not to mention my own experience.

First, please see the accepted answer to this question which is from Cook's Illustrated.

Secondly, this article from Stella Culinary gives a very detailed description of what brining is and how it works. Please see excerpts below.

What Is A Brine and Why Should I Use It?

In its simplest form, brine is a salt and water solution that food products, most commonly meats, are soaked in for a given period of time to improve the product’s overall quality.

How Do Brines Work?

The most conventional explanation of how brining works describes the movement of salt and water into proteins through a process called osmosis. This however is incorrect. Brining actually works through diffusion, not osmosis, and it’s important to make that distinction if we are to truly understand how a brine works. 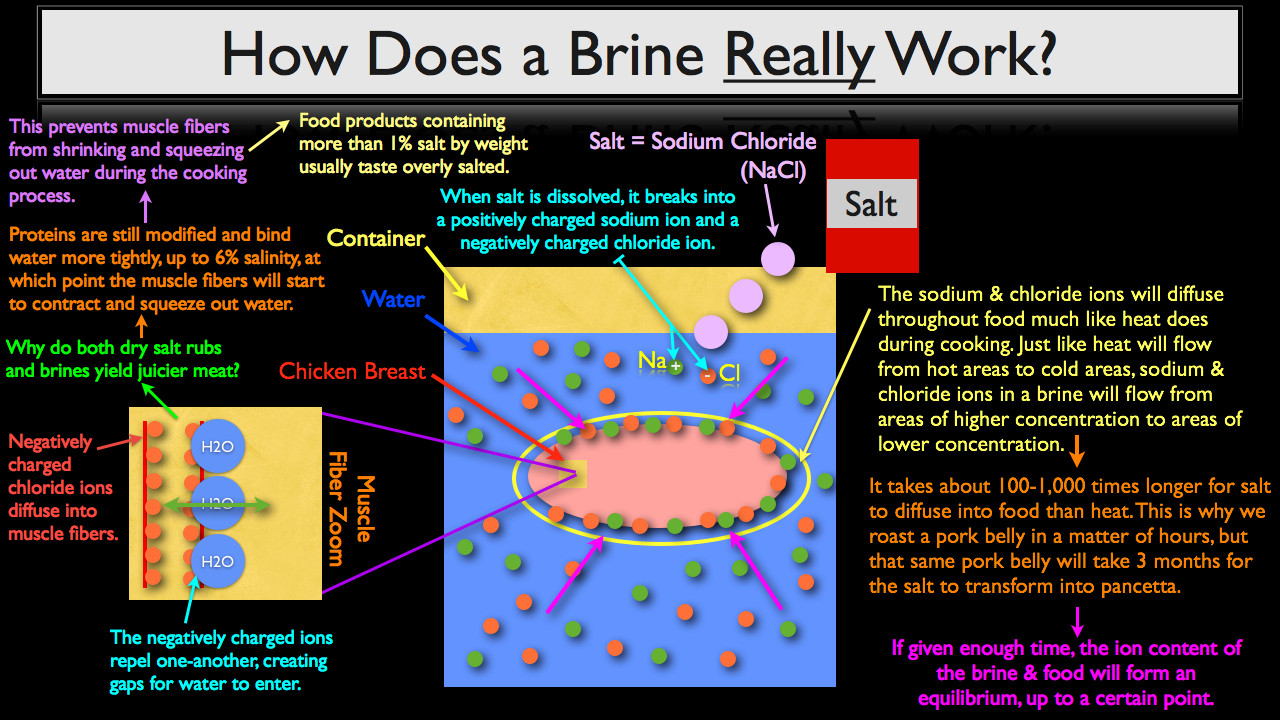 This is a very good article and gives an in-depth look at brining. I personally use a gradient brine (5%) or dry rub and I can personally attest that the salt does get into the meat.

No, I do not cook my brined chicken with added salt. I always brine chicken overnight with maybe a bit more salt than is standard. The next day, I rinse and soak it briefly in clear water, then cook it without adding salt. It is always salty enough from the brine and very few people eating at my table ever add salt. From my taste buds, I believe chicken does absorb salt from brining even though others insist it cannot be absorbed. I respectfully disagree.

6
How much salt is absorbed by meat during brining?

0
How do I make the chicken absorb more salt by freezing it?
5
Why is my brining giving varied and usually poor results?
0
Can state of chicken affect brine?
5
How long will fermented/brined pickles last?
5
Brining multiple chickens
2
How to make "salt-crust-baked" chicken?
2
Brining vs Salting - what's going on?
3
Can I use chicken brine as a base to make a broth?
0
Adding salt to a marinade to brine?
9
Can salted capers be un-salted?