how to whip UHT cream?

Today I was making a cake for which I needed whipped cream.

The local store did not have fresh cream so I bought UHT cream, I am not sure that's the correct term in English, you basically treat it with high temperatures so that it lasts longer. Said cream is specifically meant to be whipped, or at least so the packaging states.

I used a plastic bowl and 400ml of UHT cream, straight from the fridge. As usual, I used an electric mixer, something like: 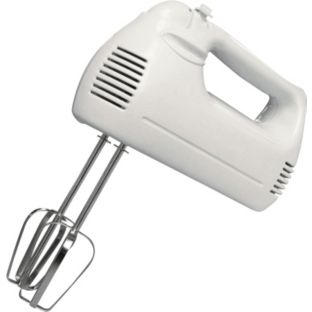 Unfortunately after 20+ minutes of mixing the cream was not starting to whip at all. I somehow managed to finish the cake thanks to a food processor that can somewhat whip cream, but the question stands. What did go wrong? Is there something about UHT cream or was I generally careless?

The key to lush whipped cream is choosing lush cream to begin with. Ideally, you want cream from grass-fed cows — it has a richer, fuller taste and a lighter, fluffier texture — and cream that has not been UHT pasteurized. UHT means “ultra-high temperature,” which in turn means that the cream will be difficult to whip since it’s been thoroughly cooked and in the process has lost a great deal of its natural thickness and ability to hold that thickness when whipped. (Whipping simply incorporates air into the cream. The fat in the cream stiffens around the air pockets and holds itself up to create the fluff effect. Cold fat is stiffer than room-temp fat, which is why using chilled equipment and chilled cream is so important.) Take a look at the ingredient list on UHT whipping cream — you’ll see that it’s been thickened with carrageenan, gums, and other stabilizers to recreate the thick texture the cream has lost through having been overheated. Not exactly an ideal scenario.

Some pointers mentioned in comments above that may make a difference in how much success you have when whipping any cream, but especially UHT cream:

Bonus #1 - Issues can occur with other heat treated products. E.g., pasteurized egg whites are more difficult to whip into peaks. While I have read that it can be done, I have never succeeded. I have also been told that cream of tartar (a stabilizer) can make it work.

Bonus #2 - The difference between UHT and ultra-pasteurization is not the process, but the container. They both use ultra high temperature pasteurization.

I looked on another website and it said to add 1 tablespoon of skim milk powder for each 250 mls( cup of cream) and if you are going to add sugar to sweeten then whip the cream first, then stir in sweetner last. Haven't tried it yet, so not sure if it will work, but it came from the site that produces the UHT milk in Australia. Hope this helps.

I have not tried this yet but I just watched a video on you tube where the man used about 10 grams of unflavored gelatin in the mix. Lo and behold it worked using uht milk. I have been researching this to figure out a way to make cake frosting that is light. Here is the link https://www.youtube.com/watch?v=C63dz2JlA9g.

Melt enough butter in a cup in the microwave to raise the fat content of your cream to above 40%. It will only take a few seconds to melt, so don't go too long.

Not the answer you're looking for? Browse other questions tagged cake whipped-cream or ask your own question.

7
Overpressurizing a cream whipper?
13
Whipping-cream will not stay hard or keep its peaks and gets runny
8
Pros and Cons of cream whippers?
5
Why did my tiramisù cream become grainy?
2
When whipping cream, does its state continually cycle through various states? Is there a dead end at whipped butter? Or does something else happen?
3
Japanese Cotton Sponge Cake - How to stop collapsing?
5
How to thicken a sour cream-based pastry cream?
7
Whipping heavy cream with melted chocolate
6
Can I whip cream that is past its use by date?
5
Why won't my whipped cream (with extras) stiffen up?