How to cook spaetzle (German homemade noodles/pasta) without it ending up soggy?

I've made spaetzle a few times now but every time I struggle with it ending up a bit wet/soggy, I try to drain it the best I can but it holds a lot of water still.

I do sometimes end up cooking it longer then usual recommended 2/3 minutes because I worry it will stay too raw. am I doing something wrong, or could I do something to stop that its always so soggy/wet? I use a spaetzle maker (the sliding bucket grater type).

The usual kind of recipe I make is this:

The full recipe is here: http://hickitchenblog.com/2013/06/21/cheese-spaetzle-recipe-and-spaetzle-maker-or-hobel-tips/

I see that recipe says the pot of water should only be simmering. I just read when researching that the water should be at a rolling boil for it not to be soggy, maybe this is what I need to do? I'm sure I tried that at some point though. Or that I overcooked the spaetzle until now and that makes it soggy? Im not sure.

Looking at your recipe I see two issues:

The batter must be beaten well. You can do this with a mixer, but it's likely to "creep up" your dough hooks. I know a few restaurants that do even large scale recipes by hand (or arm, in this case). You need the gluten to develop and the batter to become nice, smooth and quite stretchy: 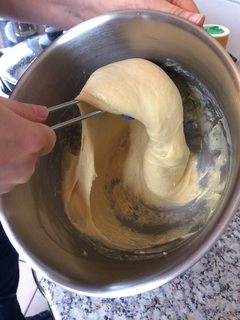 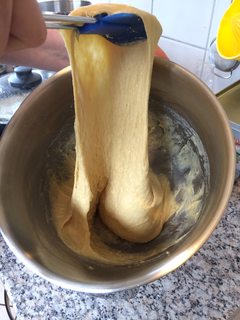 (Not beaten with the spatula in the pictures, but with the dough hook in my mixer.)

Bring a pot of salted water to a roling boil, just like you would for pasta. Use your "Spätzleshobel" (-> "Knöpfle"1 / "buttons") or a potato ricer (-> (long) "Spätzle" / noodles) to form your Spätzle right into the water. Do not put more than one "tool filling" in the pot at a time, work in batches. They will sink to the bottom of the pot. A quick stir can loosen those that may have stuck to the bottom. Once they float, take them out or leave them in the pot for another minute or two, depending on the "stiffness" of your dough. With your "Spätzlehobel" it's probably best to take them out as soon as they float to the top. Place them in a colander to drain. Repeat with the next portion. 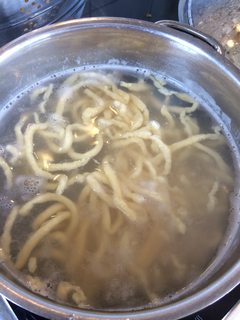 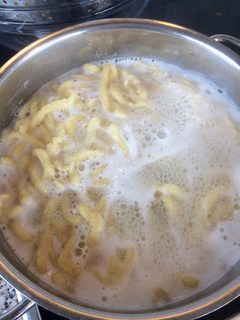 Left: not yet done, right: ready to take out.

When you have cooked all your Spätzle, either pour the hot water over all Spätzle or return all noodles back into the pot (give a quick stir to loosen) and drain together. 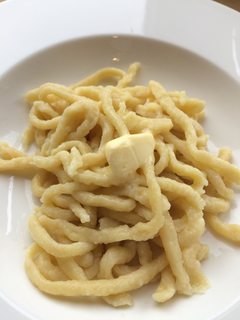 Don't expect "al dente" like for Italian pasta. This is something Spätze will never be - it's simply not in their nature. That said, the goal still is to get them quite firm, never a glutinous mass (bleach!). Also, if they stay in the serving bowl, they will start to stick, period. To counter this, you can add a tablespoon (or more) of butter and gently stir to coat them. Note that stickiness isn't much of a problem in traditional Swabian cuisine because we tend to serve generous amounts of gravy with our food. (Non-Swabians have claimed that we "drown" our food, but to each his own, right?)

1 On Nomenclature:
There are regional differences on what qualifies as "Spätzle". Some will only accept the long noodles as such and call the round blobs "Knöpfle" ("Buttons"), other regions have mainly the round variety and call them "Spätzle". For your "Kässpätzle" which hails from the Allgäu, the latter is the case.

I use 2 eggs and 2 tbs milk for my spaetzle recipe (with the 1 cup of flour and 3/4 tsp salt). And a rolling boil, cooking for 2 - 3 minutes until all of the noodles are floating at the top... I also dump the batter on a cutting board and with a large knife I slice lengths of dough into boiling water.

Not the answer you're looking for? Browse other questions tagged pasta noodles egg-noodles or ask your own question.

7
How long can I hold spätzle in ice water or drained?
9
What is Spaetzle? How is it cooked?