American “Bacon Roll” - what is it?

I was in New York recently, and went for breakfast in a diner. My wife ordered an egg sandwich, and although it wasn't specifically listed on the menu, I asked if I could get a bacon sandwich.

The waitress just looked at me for a moment (I found that some New Yorkers seemed confused by my British accent), then said "A bacon roll?". Thinking she meant a bread roll with bacon on it, I said yes.

When the food came, my wife's egg sandwich was exactly what you'd expect. My bacon roll was what seemed to be something similar to an omelette with bacon in it, with a mixture of boiled potatoes, onions, peppers and something other things on the side, plus jam and toast.

Additional detail: A sausage roll in England is sausage meat wrapped in pastry but bizarrely, any other roll (e.g. bacon, cheese, ham, tuna, etc) is a filled bread roll, so a sausage roll and a bacon roll have absolutely nothing in common. I wondered if there was a similar oddity with the word roll in the US.

The vegetable dish was roughly cut boiled potatoes (not roasted or browned in any way) with cooked onion, peppers, and some other unidentified vegetables. There were no spices or other seasoning (it was pretty bland), so it doesn't sound like or look like Cajun Home Fries as has been suggested by @Catija.

I have no clue what a "bacon roll" is... and if I had to imagine what it is, it would not be what you got. My mental image was a "sausage roll" but with bacon.

A sausage roll is like a pinwheel or "cinnamon roll" but with savory biscuit dough (American biscuit) and ground sausage meat: 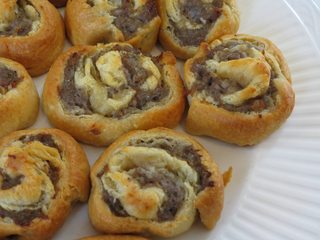 So, a "bacon roll" in my head is the same thing but with chopped bacon instead of sausage.

I can find no reference to what you've described... which sounds like a bacon omelet. It's completely possible that you confused the waitress with your fancy British accent and she thought that a "roll" was British for "omelet"... though how she turned "sandwich" into "roll" and then into "omelet", I'm not sure.

If you want a "bacon sandwich" in future (meaning a roll with bacon on it), you might try asking for a "BLT - with no lettuce or tomato".... though, you should be sure to remember that our "bacon" is what you Brits call "streaky bacon", I believe. The closest thing we have to British bacon is "Canadian Bacon" or simply "ham".

As to the potatoes, they were likely what are often called "home fries". Roughly chopped/diced potatoes, sometimes mixed with peppers and/or onions.

Here's an image of "Cajun home fries", which look a lot like what you've described: 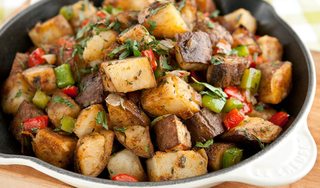 As per @Joes comment, the "roll" was most likely referring to an omelette. If you perform a Google search for rolled eggs and look at the images, you will see rolled omelettes. Apparently, this diner used the term "roll" as such. Here is one image of rolled eggs: 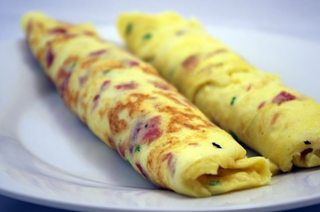 The side dish you had was most likely a regional version of home fries: 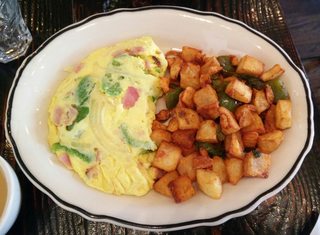 What you encountered is not uncommon. Next time, ask what the terms mean or clarify what you want. Most places are more than willing to explain terms and help you get the dish you are expecting.

What was the name of the place you went so I can avoid ever going there? ;-) The food you described is NOT normal for any decent NY diner. It isn't even normal for Denny's (which is a chain-restaurant approximation of a diner).

I really do think what you were served as a side was a very poor specimen of home fries. Home fries are a common side for any egg dishes in NY/NJ diners. They are usually diced potatoes with onions and tomatoes and/or bell peppers and often with some additional seasoning. They should be cooked on a griddle/in a frying pan until crispy but they can be started from half-cooked potatoes to speed up the cooking process. A good NY/NJ diner should have the option of either home fries or hash browns and a good waitperson in a diner should also have asked you what kind of toast, either of which questions might have clued you in that you were having a communication issue.

I lived for about 15 years in NJ and have a lot of experience with diners in that region. I have traveled a lot for work and I have family in various parts of the US and I now live in CA and I haven't come across "bacon roll" as a common term.

In my experience, there is no such thing as a standardized "bacon roll" or "sausage roll" in the US, or in NY/NJ diners. There IS such as thing as "pork roll" in NJ diners, but it doesn't have anything to do with bread rolls or omelettes -- it's essentially another name for the pork product more often called Canadian bacon elsewhere in the US, and you wouldn't find it in a NY diner unless they are catering to NJ folks (which doesn't happen).

It's possible that this particular diner calls omelettes "rolls" but that is not standard in American cuisine or in NY diners in my experience. In California, there is something essentially like a breakfast burrito that is called a "roller", but I've never encountered those in NY/NJ, and it would have had a tortilla.

If I were to imagine what it would be, I'd think of a (bread) roll made or served with bacon in it, and I think that is what most Americans would probably come up with. "Bacon roll" does not conjure up images of eggs or omelettes for me.

Next time, what you want to order is "bacon on a roll" or possibly a BLT (bacon-lettuce-tomato sandwich, usually served cold tho, on toast, with mayo). Most of the places you order that might be surprised not to have egg included in the sandwich. You could even say, "like a breakfast sandwich without any egg" or "like a BLT without the lettuce and tomato" to clarify. If they still seem confused just ask for a buttered roll and a side of bacon and put it together yourself. :-)

Not the answer you're looking for? Browse other questions tagged american-cuisine or ask your own question.

4
Which is a typically American way of seasoning spaghetti and other pasta?
4
What are the major menu differences between Canadian and American Thanksgiving?
13
What styles of barbeque exist in American cuisine?
6
How long after baking do American chewy cookies get their normal texture?
3
How to recognize when American style chewy cookies are done?
4
American cheese availability and utility
3
What does an American recipe mean by “1 tablespoon vanilla”?
18
Does “American” Food exist around the world?
1
Is a pizza like this unheard of in the USA?