In Chinese cuisine it's very common to start a vegetable stir fry with a bit of minced meat, typically pork, to give the dish a deeper flavor. To make a vegetarian version I usually just leave this out, but I've been wondering if something else would give a similar effect taste-wise.

Typical meat replacements like tofu or seitan don't work here because they focus on providing the texture and protein of meat, but not so much the flavor.

It seems like you are primarily interested in reproducing the umami of the meat. Tofu does in fact have glutamic acids that will add to the umami; just make sure to thoroughly dry the tofu (extracting as much liquid as possible) before use. In addition, you can use minced mushrooms, as Stephie mentioned in the comments. You can also experiment with adding Bragg's Liquid Aminos, since it has a lot of umami but has less than half the sodium of soy sauce.

Keep in mind, though, that the meat in the original recipe is also relied upon for its fat; tofu does have some fat, but not as much as meat, and it's unlikely to render out during the initial fry. Therefore, I would suggest adding 7 grams of fat (e.g., vegetable oil) for every 100g of meat you are replacing.

Let's recapitulate the textural options you have:

Now about the umami you are missing: Most of the things mentioned are absorbent (mushrooms, crumbled tofu...), so they will soak up umami rich sauces when sauteed with them, especially when you add them when most of the water is fried out. Other are made with or cooked in a liquid (seitan, TVP). So let's look at some umami sources we have: 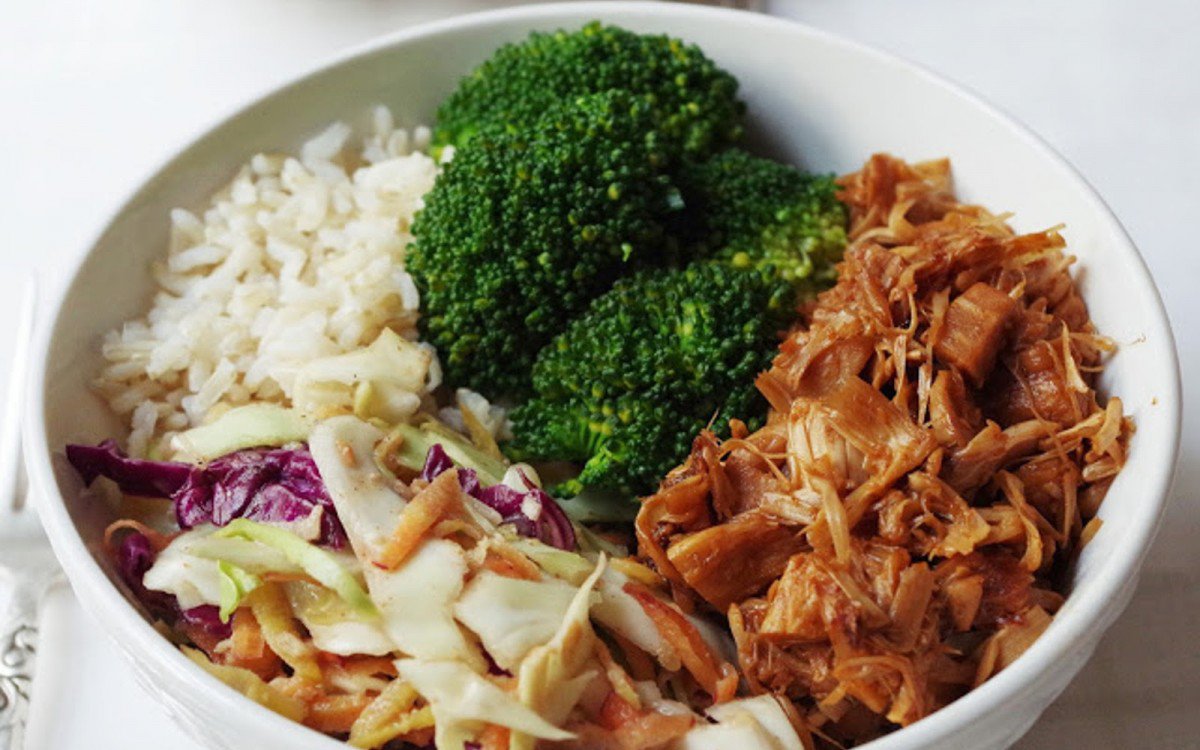 Serious Eats used a dry fried minced mushrooms to substitute for, in that case, beef in a dish. I don't know if it will substitute for pork mince in the same way, having no firsthand experience, but it may be worth trying. The results are, reportedly, rich and savory and deeply flavored, lots of umami - which sounds like it would do a similar job of adding depth and flavor to your stir fry, even if the specific flavor added is different.

To make the mushroom mince, they used button mushrooms, well minced and fried until the water had mostly evaporated out and they were deeply browned, and added them to the minced mushrooms they had on hand from the broth in that recipe. With a bonus of very mushroom-flavored oil, to fry in. That's a nice addition, adding flavor and, also, fat (since meats usually add both).

For your stir fry, it seems like a similar substitution might work - start with a few minced mushrooms, making sure they get quite dry and brown by the time you're done. They should give the flavor some of that extra depth and savoriness, just as a meat mince would do. You might want soy sauce or liquid aminos or even something like kombu to touch up the umami flavor a bit more - your stir fry might need a little more since that recipe had other flavors to rely on.

Don't know many dishes that start with pork mince because my experience is limited to North China, mostly Beijing. There, mince was added to noodles mostly; with veg was eggplant, sometimes mushrooms; and of course in Mao Po Tofu.

I believe it's the mince browning that adds the flavor. Getting some good caramelized flavor can be done by adding just a bit of sugar -very typical in wide range of recipes- allowing to really brown.

This idea works for me when I'm cooking Italian-style foods, but it should translate to Chinese cooking with some modifications.

I use green lentils, cooked through and then mashed and spiced. For Italian-style, I use cumin, smoked paprika, nutmeg, salt and pepper.

For Chinese, I would suggest some hoi-sin sauce, with cumin and ground coriander.

Straight up msg my guy, alternatively get some course salt and whole Sichuan peppercorns, toast together in a dry pan and pick out the peppers after it gets fragrant

You could try pressed bean curd. If you chop it up, it might have a similar texture, and it does provide protein. It comes in plain and seasoned kinds that you can try.

Not the answer you're looking for? Browse other questions tagged substitutions pork chinese-cuisine vegetarian stir-fry or ask your own question.

9
How to reproduce meat flavor