I don't know if the "Old Wild West" franchise even exists outside of Italy, but I'll give it a shot anyway. In those restaurants they serve this sauce, 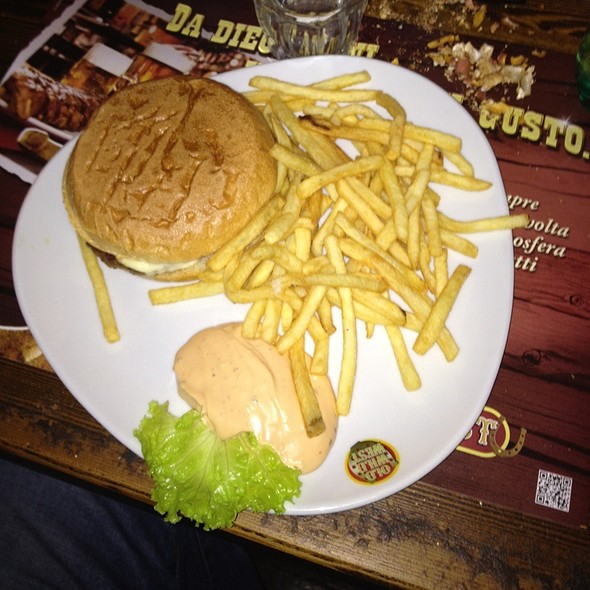 which colors resembles much the one of a cocktail sauce. In the sauce there is something solid that I believe to be tiny pieces of chili peppers. It has a neutral smell and tastes creamy, slightly spicy. It is very good to eat with sausages or roasted meat.

I have asked the waiters to tell me the recipe, but they wouldn't. Once, a friend of mine told me that it was a mix of mayo, ketchup, chili peppers and worchester sauce. I tried several times to mix them with verious percentages of the components and nothing I could come up with tasted anything like that.

Can you help me to understand the recipe?

I brought some OWW sauce back with me from Italy this summer. Here are a list of ingredients on the back of the packet in both Italian and French.

I've never been to Old Wild West but that looks very much like "fry sauce" or "secret sauce" as we use them here in the United States. In looking at Old Wild West's website, it appears to be geared around offering traditional US style burgers, fries, steaks, ribs, etc. so the inclusion of US style fry sauce would make sense. Here is a link to a typical version that would be used here: http://www.epicurious.com/recipes/food/views/epicurious-not-so-secret-sauce-51261820

Not the answer you're looking for? Browse other questions tagged sauce food-identification or ask your own question.

9
What is pizza sauce?
6
Tzaziki: the drink, not the sauce
4
secret ingredient in a restaurant bolognese
6
How can I make 'Santon sauce'
4
What's this yellow plum-like fruit with a spiky stone? West Africa
1
Substitution for hoisin sauce
4
Broken pasta sauce
2
Mushroom soy sauce, brand identification or substitution