I bought a frozen ham steak (natural pork from local farm/meat processor), and noticed when I went to cook it that there is a bit of very bright, hot pink on the surface. Is this safe? 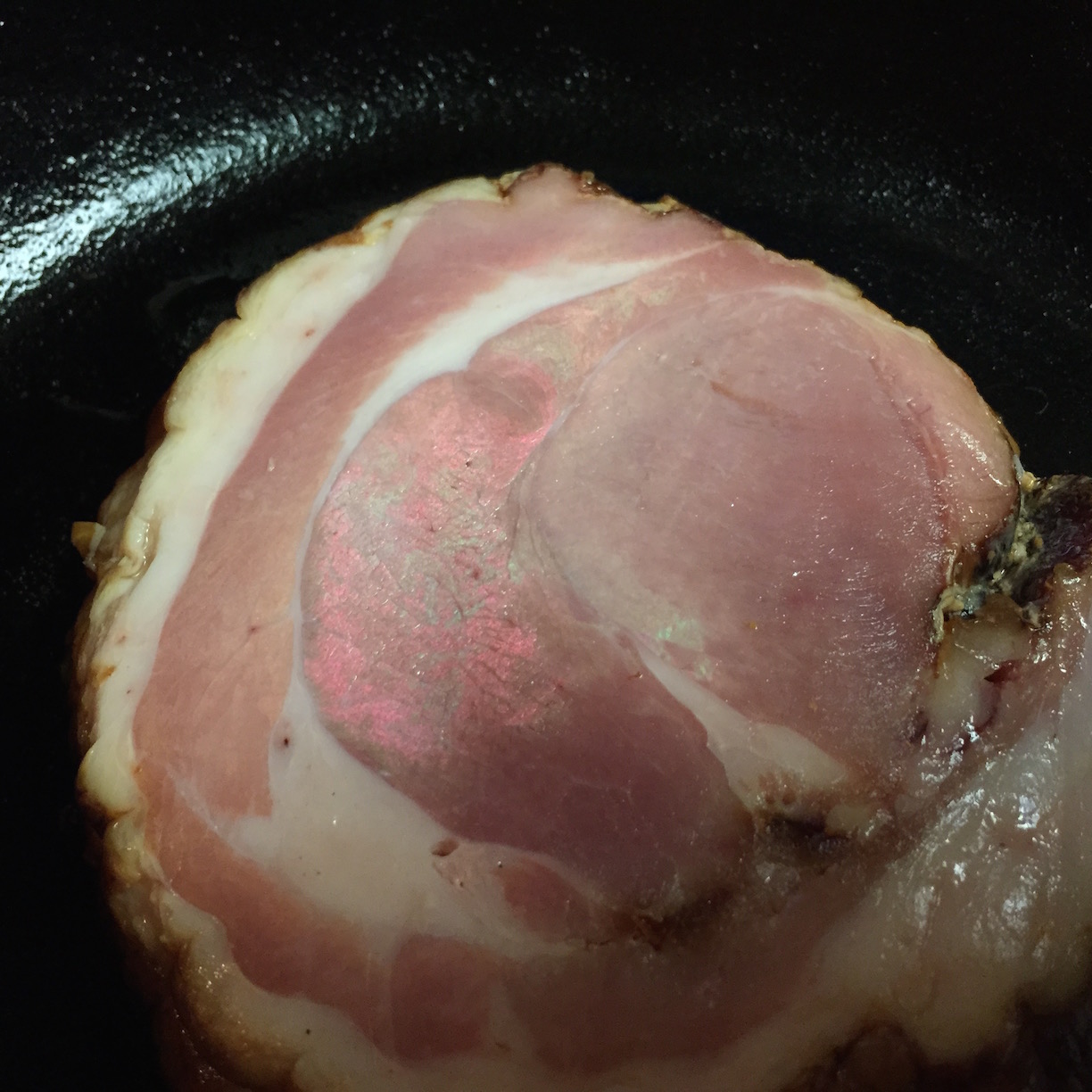 From the Henning's Market FAQ:

The shiny, greenish, rainbow like color on sliced ham is a sign of oxidation that occurs when the meat is exposed to the metal on a knife or slicer. The nitrate-modified iron content of the meat undergoes a chemical change that alters the hams pigmentation. This effect can also be seen in sliced beef, such as roast beef. It is not an indication of spoilage.

And also see this Daily Mail article "Revealed: Why you sometimes see the most spectacular rainbows in a slice of beef":

On the USDA website under the heading ‘Iridescent Color of Roast Beef’, this strange phenomenon is explained to be in fact perfectly natural and caused by iron and fat that exists in meats such as roast beef and processed ham.
According to the USDA, when light hits a slice of meat it splits into colors like a rainbow due to the elements present in the meat and this is called a ‘diffraction grating’.
There are also various pigments in meat compounds which give it an iridescent or greenish cast when exposed to heat and processing.

Yes, this is safe. It is part of the natural coloring of meat. It just happens to break light this way sometimes.

See for example this article on "beef rainbows": http://www.theatlantic.com/health/archive/2013/02/what-causes-beef-rainbows/273534/

Not the answer you're looking for? Browse other questions tagged food-safety pork ham or ask your own question.

14
Food safety concerns regarding cooked steak stored in the fridge
4
Preparing pork belly: Odd barn yard flavor
12
How do I determine the cut of a pork steak prior to purchasing it?
1
Pork shoulder discoloured in the freezer to a greenish grey colour. What happened?
9
Why exactly is thawing via hot water bad?
2
Using the bone from a spiral cut ham
5
What is a “raw smoked” gammon (or ham)?
3
What can I substitute for hot Korean chili oil in this pork noodle recipe?
2
Why would eggs have blue in them?
1
Cooking a ham a second time