Why did my ginger garlic paste have a bitter aftertaste?

I cooked a base for indian sauce based on lots of onion, homemade ginger garlic paste, some veggies (I used carrot, a little napa cabbage, bell peppers) and spices. After cooking, the sauce had an unfortunate bitter aftertaste. Nothing burned, I cooked over careful heat.

First I thought it wasn't cooked enough, so I cooked some more over low heat. The bitter taste did not disappear.

After considering this some more, my suspicion turned to my homemade ginger garlic paste. It turned green after grinding the ginger and garlic, but that didn't bother me, it's a fairly common phenomenon. But I fried some paste in two batches, and then tasted the result. One was fried until it browned. The other was just fried for 2-3 minutes, and remained quite green. Here's a picture showing (clockwise from lower right) raw, lightly cooked and browned ginger garlic paste: 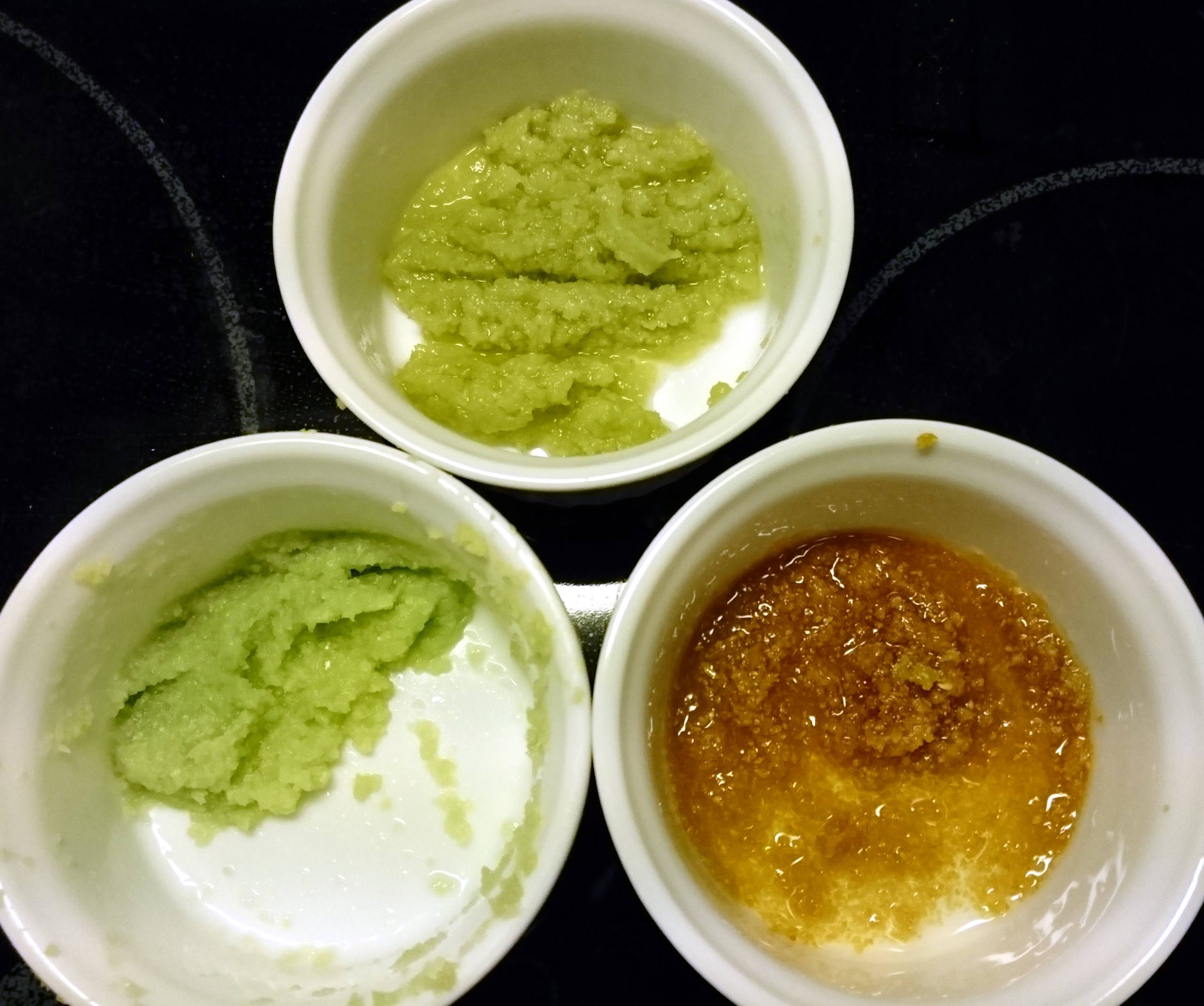 The browned batch was sweet, followed by the pungent ginger. The lightly fried batch was quite bitter, and also pungent.

So I think the bitterness in my sauce was caused by my ginger garlic paste. But why? What happened?

I see three possibilities based on what you've said:

The green color of the paste is telltale for a lot of properly sprouted garlic... as hoc_age already said, the sprouts turn bitter when cooked, so break up your garlic and remove anything green inside before making the paste. Also, blenders tend to oxidize oils, if the result is still not satisfactory, try using a mortar and pestle instead - garlic and ginger are easily broken down in a mortar if coarse salt is added and used as an abrasive... just remember to put less salt in the dish!

Cooking ginger/garlic paste too long at high heat (that didn't burn because it was premixed into a couple cups of yoghurt/spices/meat), seems to have caused the bitter taste in the portions of the meal that were towards the bottom of the pot.

When you add the garlic paste, don't stir it too much, and don't put garlic paste in oil when there is nothing else in it.

When the raw smell of garlic goes away, that means it's cooked through, it won't have the bitter taste.

I have struggled with this too and after very carefully making and remaking a recipe (4 times in one day), I found the problem was with the ginger. The longer the recipe cooked, the more bitter it would become until it was inedible. I bought new ginger thinking it could just be old but the same thing happened so I take the fresh ginger out completely and just add some powdered ginger later on in the recipe. Haven't had the problem since. I wish I could use fresh but it just won't cooperate. Maybe I am cooking it too hot

Overcooking Ginger is the cause

Ginger if overcooked in sauce masala, tea etc gets bitter and loses its flavour.

Not the answer you're looking for? Browse other questions tagged flavor garlic ginger or ask your own question.

9
Why is my icecream bitter?
10
Safety of Blue / Green Garlic
1
How do I avoid splatter when frying ginger garlic paste?
1
Mixture of ingredients has a bitter taste
3
Garlic: minced, crushed, chopped, sliced. When to use each one, and what is the difference?
5
Bitter taste of rocket pesto
1
Can we preserve garlic and ginger paste?
0
When and how to add garlic to a dish?
0
How to Remove Garlic Ginger Paste smell from refrigerator
1
Bitter shortbread - what to do with it?