What is this white, non-fuzzy, substance on my kimchi?

I have a jar of store bought kimchi that I neglected for a few months (bought around mid July). Today I opened it and noticed that a few pieces had some white stuff on it, but it doesn't look like mold. The best way to describe it is that it is similar to the white yeast concentrate that collects at the bottom of homebrew or in some unfiltered beers. I took a piece without the white stuff on it and tasted it, and it tasted fine, if a little bit stronger with an almost boozy taste. I was just wondering what this is and if it's safe to eat, because as far as I know, kimchi doesn't have yeast in it. 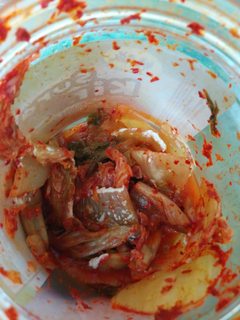 That's mold, and you should discard it.

Kimchi keeps forever (well, years) if and only if it's not exposed to air, meaning there's always enough liquid in the pot to cover the cabbage. If you have bits poking up into the air and you leave them there for days/weeks, they'll dry out and start growing mold.

Kahm Yeast. Very common on pickled products "above the brine."

Annoying but not actually hazardous.

To avoid, make sure there is no "above the brine."

The appearance of a white, thready yeast, commonly known as kahm yeast, is often a byproduct of the lactofermentation (or pickling) of certain vegetables, usually the result of exposure to air. Although harmless, it can give pickled vegetables a bad flavor and must be removed regularly during fermentation.

It might not be mold, it could very well be bacteria or yeast. Lactic acid bacteria and yeast would be happy to grow in the acetic kimchi environment. Looking at the photo I'd suspect it's not mold. The advise to discard it is still spot on.

I'm a microbiologist in dairy.

Only two things normally grow in such an acidic environment as kimchi. Yeast or fungi (mold).

The two can change under influence of circumstances (such as temperature). So fungus can become yeast and the other way around.

Normally fungus can make harmfull poison. Yeast normally does not. Both organisms are living from the same source in kimchi, called sugar.

As kimchi should ferment because of lactic acids (bacteria) the sugar should be eaten by those lactic acid bacteria. Whenever you add sugar later or not all sugar is fermented well, other organism can grow in kimchi such as yeast.

So how can you be sure? Fungus is normally shown only on the top side of the kimchi and makes an unclear liquid. The kimchi liquid should be clouded.

When yeast infected the kimchi, the kimchi should be harmless. The smell shold be weakend because of the growth of yeast. There should be a small alcohol smell, but that's hard to notice. The kimchi liquid should be clear.

I also need to inform that fungi (mold) make poison. The fungi itself are normally not harmful. So the danger is the poison, heating will not change the poison and is no solution. Always be carefull with it, but if you are sure there is alcohol smell in there, then it should be safe.

By the way thanks, I do have the same problem over here after putting radish in my 6 months old kimchi. I thought the kimchi shold preserve the radish, but, I guess the radish contains some sugar and natural yeast. So exposed to a small amount of air the yeast started to grow.

How do I know it is yeast? My white spots are on the bottom of the jar. My lactic acid bacteria already died, then I put the radish in. So the radish went bad and the lactic acids weren't there anymore to prevent that. I did throw it away because I do not feel safe.

Not the answer you're looking for? Browse other questions tagged fermentation korean-cuisine kimchi or ask your own question.

4
What kind of reaction is this?
3
What can I substitute for hot Korean chili oil in this pork noodle recipe?
4
What is the difference in the making of yoghurt to produce carbonated (like Kefir) vs non-carbonated yoghurt?
5
What is kimchi "brine"?
2
What can I substitute for radish when making kimchi?
0
Can this shrimp paste be used to make kimchi?
2
is this mold on my kimchi or yeast?