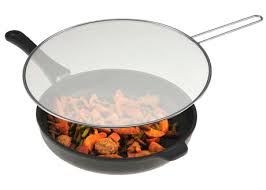 0
Is it possible to stir-fry meat cutlets without "oil bombing" ?)
18
Is there any way to avoid grease splatter?
2
Why dry steak/meat/chicken/fish before cooking on a stove?
1
How do you avoid getting burnt by hot oil?
1
Add spice then oil, or oil then spice?

3
leaving oil on a frying pan for use later
8
Can I use extra virgin olive oil for cooking steak?
20
Why did my attempt at pan-searing beef filets fail miserably?
2
Will a grill pan reduce oil splatter when pan-frying steaks?
3
Seasoning No-Stick Frying Pan
10
Trouble frying an egg on a stainless steel pan
1
How much smoke is normal for pan cooking steak?
12
Cooking a nice pan seared steak for picky eaters
3
How to prevent oil splattering when placing steak in pan?