What can I use instead of Sriracha if I only want to make a dish non-spicy, but similarly flavorful?

The specific recipe I'm making is http://www.budgetbytes.com/2012/08/spicy-noodles/ (copied at bottom for posterity).

I'm a big fan of the spice, but my guests and partner are often not. Since the sriracha is a critical part of the sauce, and makes the noodles quite spicy, I'd like to somehow avoid the spicy effect, while keeping the flavor, texture, and if possible color, reasonably similar. The dish is alright if you simply remove the sriracha and keep the soy sauce and brown sugar, but it's not as flavorful. Is there anything that is similarly flavorful that I could use, but that doesn't have the spice?

I've also tried an equal amount tomato paste, and holy crap was that a mistake. There might be some other way to use tomatoes, though.

There are a lot of things you could add that would deliver a similar pepper and garlic flavor. One thing that comes to mind is Ajvar. It's a Serbian relish made primarily from red bell peppers, garlic, and eggplant. I live in the US, and the local supermarket carries it in both mild and spicy versions. Aside from being a lot milder, the flavor profile is pretty similar to sriracha sauce.

If you don't mind doing some more work, you could roast, skin, and mash some red bell peppers yourself. Then add some garlic, a bit of something sweet (optional), and some hot pepper (also optional).

I make a similar sauce using Chili Garlic Sauce, which has a similar (but not identical) flavor profile and color and adds a lot less heat. It is also not as smooth. If you want to have a closer texture, you might need to press it through a sieve and discard the seeds (which could also further reduce the spiciness -- but I really don't find this sauce to be hot at all).

Depending on the heat tolerance of your audience, you may also need to sacrifice your crushed red pepper in the egg. Perhaps you could serve some chili oil on the side for people who want to turn up the heat? 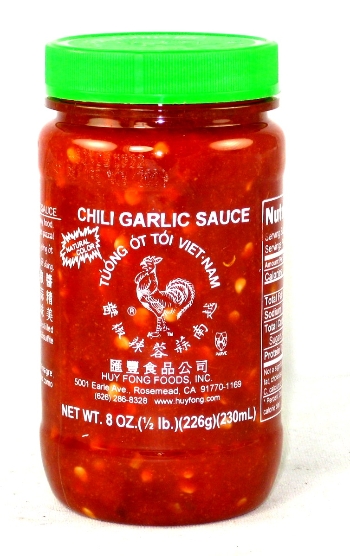 Edit: Another option based on MHH's suggestion that the chili-garlic might still be too spicy. Replace both the sugar and most of the sriracha with Sweet Thai Chili sauce. 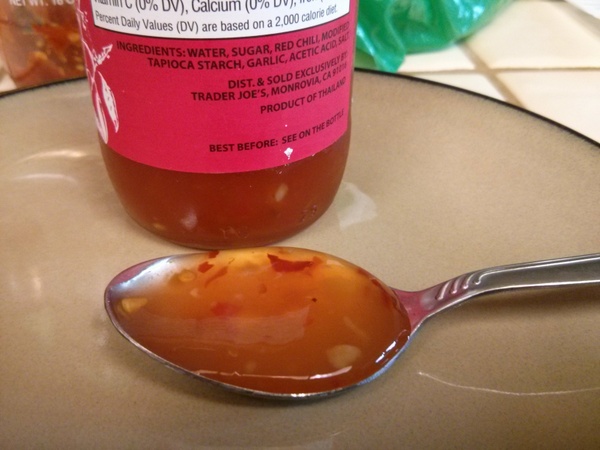 It's not a common ingredient unless you have a Dutch or German market near you -- but I'd substitute Curry Ketchup (aka Gewurz Ketchup, aka. Schaschlik Sauce).

Hela makes a garlic (knoblauch) variety that would likely best fit your need, but there are other varieties of different heat: mild (delikat), sharp (scharf), extra hot.

Admittedly, there are some other spices in there (mustard, cloves, etc.), but I think it would help to round out the flavors and create some other interest as you're removing the heat from the chilies.

Not the answer you're looking for? Browse other questions tagged substitutions sauce or ask your own question.

5
Soy sauce substitute
0
What can I substitute for butter in Alfredo sauce?
4
Can I use cream of tartar in place of tataric acid
3
How long will my homemade marinade with orange juice last?
3
Sweet and sour chicken not sticky
2
Ingredient substitute for sriracha hot sauce
2
In writing a recipe, when should I remove the bay leaves in the process?
1
How can I cut the flavour of Worcestershire sauce in a completed Asian dish?
2
How 豉椒炒蜆 (stir fry clams in black bean sauce), without black beans?
3
Keto replacement for flour