Why did my tiramisù cream become grainy?

Late Friday night, I prepared tiramisù and refrigerated it until serving it the next day, I guess about 20 hours or so later. The texture of the cream layer seemed fine when I prepared it, but when I served it, it was grainy. It still tasted normal The graininess really is quite uniformly distributed and dissolves on the tongue. It's not an overcooked-custard kind of grainy, and the grainy bits seemed like fat, not sugar or ice. The uniformity makes me feel like it is something that precipitated out of the mixture while it was chilling.

Here's a picture, you can see the texture of the cream (although I guess it turned out a bit blurry). 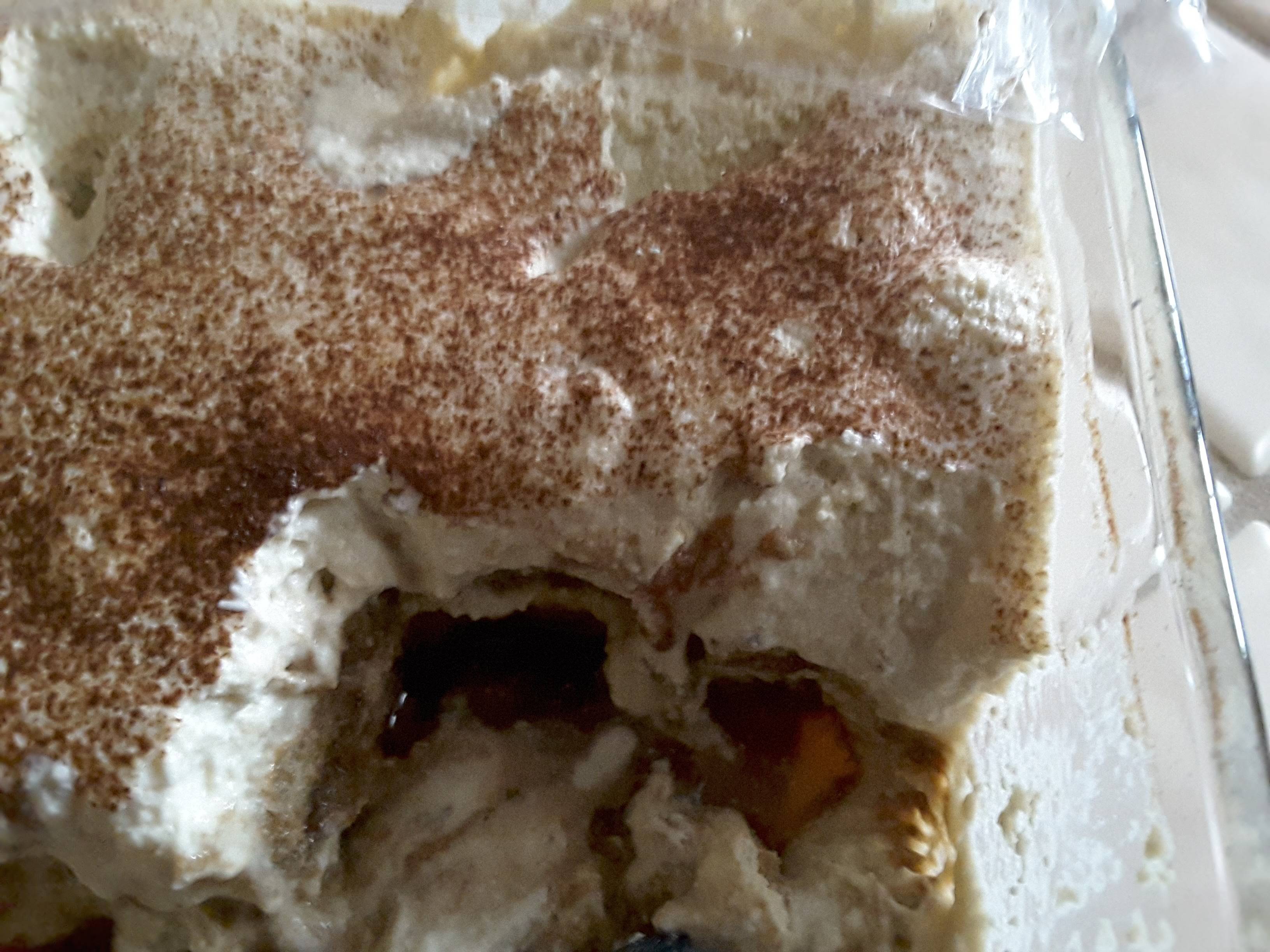 I've made tiramisù successfully quite a few times in the past; this is the first time I've had this happen to me. I was following the Williams-Sonoma recipe which has you make a zabaglione (essentially) with the yolks and sugar, beat the mascarpone, whip the cream, fold the mascarpone into the cream then beat the egg whites to stiff peaks and fold the cream-mascarpone mixture into the egg whites.

I think I followed everything precisely EXCEPT that I currently only have one whisk attachment for my mixer and I was tired and didn't want to thoroughly wash it in-between to be sure every speck of oil from the cream was gone, so I beat the egg whites before whipping the cream (I rinsed the whisk after doing the egg whites, but didn't wash it) so the egg whites were standing for a bit longer than they should have because they stood the whole time while I folded the mascarpone into the whipped cream, and then of course I folded them in.

Was the texture doomed by letting the egg whites stand too long, or did I over-whip the cream? Or do I wrack my brains further to see if I did something else?

Luckily, my audience on Saturday was not the picky type and it seems that only my husband and I were bothered by it. But I'd like to avoid it in future... (I'm already planning to get some toys to help with the ordering problem next time.)

It's funny google directed me to an unanswered question when I went looking for ways to keep my mascarpone from curdling.

That's what I think happened to you by the way. The same thing happened to my tiramisu cream last week. I probably shouldn't jump to conclusions since it was a different recipe, but I noticed when I was beating my mascarpone into my zabarengue (to use Chef John's parlance) it took on a somewhat broken appearance. It happened once before in a different dessert when I got impatient and decided I could fold my mascarpone into my barely warm berry syrup.

After much panicked googling, I discovered that mascarpone can actually be quite temperamental when combining it with ingredients that are different temperatures, but I also think the moisture content can encourage separation and curdling.

The tiramisu recipe I recently tried called for the yolks and whites to be beaten together with the sugar over a double-boiler for several minutes, allowed to cool, and then the mascarpone beaten into it. Either I didn't let my egg mixture cool completely (my guess), or the different fat content of the zabarengue disagreed with the mascarpone. It split at that stage, and after refrigerating, it had the exact same grainy texture you described.

EDIT: After further googling, it seems like contrary to common law, it's better to use mascarpone cold. It's so high in butterfat, that it's very easy to overmix and essentially churn it. I recently made a bananamisu (tiramisu with bananas) and used the same previously curdled recipe, and by beating the cold tiramisu a little to soften it and then beating the zabarengue into the mascarpone a bit at a time, and folding the whipped cream in by hand, I can happily report no separation issues.

The same thing happened to me. I think in my case the coffee I used to dip the ladyfingers in was too hot - it should be room temperature or cold. If it's too hot, it can mess with the eggs and mascarpone.

What Brand of Mascarpone did you use? This happened to me 3 times. The first time I used a recipe that I acquired from a cooking class in Chianti Italy. It came out grainy. I then tried it again with a different recipe and I had to throw out 2 batches because of the graininess again. Someone on a thread mentioned the Brand Bel Gioioso can cause this. This is the brand I was using both times. I went to an Italian deli and bought a brand imported from Italy and Presto! It was as smooth as can be when I incorporated it into the yolk mixture. So for me, it was the brand of Mascarpone that I was using. Hope that helps!!

sorry for being a little late. The answer is that much like over-whipped cream, your mascarpone might has seperated. Mascarpone is made mostly out of cream, and even with more fat, so it can easily seperated, easier than cream even. To avoid this, next time just beat your mascarpone at really low speed or gently by hand, and fold it into other ingredient using a spoon or spatula. Hope this helps!

17
Why is a copper bowl recommended for whipping cream and egg whites?
7
Why do my egg whites separate after whipping?
5
How can I get a more homogenous Bavarian cream?
1
Whisk eggs without an electric whisker
3
Whipped Cream out of Egg Whites
2
Italian meringue deflated after adding sugar
2
When whipping cream, does its state continually cycle through various states? Is there a dead end at whipped butter? Or does something else happen?
3
Whipped egg white snack texture and preservation
3
Could adding oil to boil benefit the taste and texture of the pasta?
2
Why is my whipped cream dispenser stuck?