I recently bought a couple of these from a fruit seller in Sierra Leone. On the right is the stone after eating the fruit. They're small-ish, a similar size to a lime or a kiwi fruit. 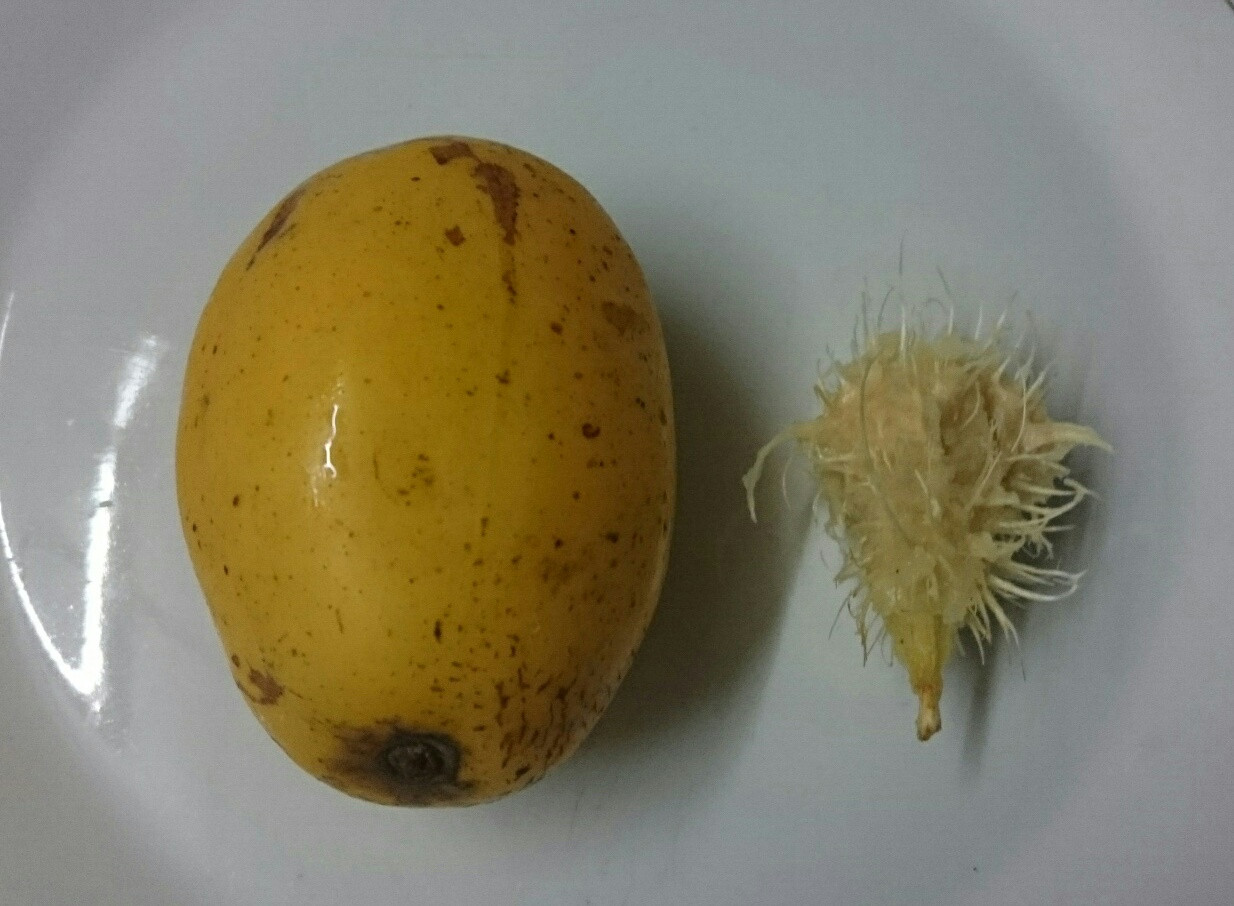 I asked the lady what it was called, but she just looked at me as if I was mad in stony silence (I'd already bought and paid for the fruit, despite clearly not knowing what it was, so maybe she had a point).

The skin is thin but strong. The fruit flesh had a texture and flavour similar to an unripe English plum, with maybe a hint of citrus-y melon and pear-like flavour. Quite sharp and slightly sour and/or slightly bitter, very slightly crunchy, slightly sweet (not very sweet). The flesh is very very slightly translucent and slightly whiter that the skin (you can see a little still on the stone).

The spiky root-like fibres are strong, sharp and make it quite hard to eat... It's like eating a very bony fish.

The only thing that came close from my research was a marula, but the stone is very different. 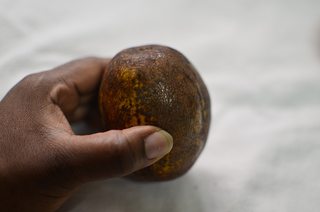 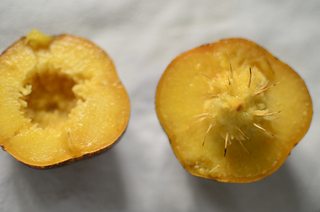 Another page has pictures of june plums that match your photo quite well: 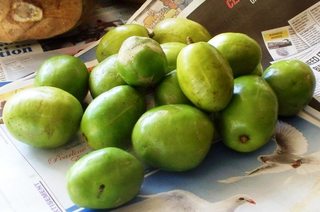 All the photos above are of the same type of fruit at different stages of ripeness.

Spondias dulcis (syn. Spondias cytherea), known commonly as ambarella, is an equatorial or tropical tree, with edible fruit containing a fibrous pit. It is known by many other names in various regions, including kedondong in Indonesia, buah long long among the Chinese population in Singapore, pomme cythere in Trinidad and Tobago,1 Dominica, Guadeloupe, and Martinique,2 June plum in Bermuda and Jamaica,1 mangotín in Panama, juplon in Costa Rica, golden apple in Barbados and Guyana, golden plum in Belize, jobo indio in Venezuela, cajá-manga and cajarana in Brazil and São Tomé and Príncipe, quả cóc in Vietnam, manzana de oro in Dominican Republic, cas mango in Cameroon. In Republic of Maldives Anbulha.

The fruit may be eaten raw; the flesh is crunchy and a little sour. According to Boning (2006): "The fruit is best when fully colored, but still somewhat crunchy. At this stage, it has a pineapple-mango flavor. The flesh is golden in color, very juicy, vaguely sweet, but with a hint of tart acidity."5 In Indonesia and Malaysia, it is eaten with shrimp paste, a thick, black, salty-sweet sauce called hayko in the Southern Min dialect of Chinese. It is an ingredient in rujak in Indonesia and rojak in Malaysia. The juice is called kedondong in Indonesia, amra in Malaysia, and balonglong in Singapore.

The fruit is made into preserves and flavorings for sauces, soups, and stews. In Fiji it is made into jam. In Samoa and Tonga it is used to make otai. In Sri Lanka the fruit is soaked in vinegar with chili and other spices to make the snack food acharu. In Vietnam the unripe fruit is eaten with salt, sugar, and chili, or with shrimp paste. Children eat the fruit macerated in artificially sweetened licorice extract. In Jamaica, it is mostly considered a novelty, especially by children. It can be eaten with salt or made into a drink sweetened with sugar and spiced with ginger. In Trinidad and Tobago, it is curried, sweetened, salted, or flavored with pepper sauce and spices. In Cambodia it is made into a salad called nhoum mkak. In Suriname, the fruit is dried and made into a spicy chutney, mixed with garlic and peppers. In Thai cuisine both the fruits and the tender leaves are eaten.

I am from Sierra Leone and this is called Chook-Chook Plum. Thorns & prickly things are termed chook-chook in Krio, hence the name. However, June Plum is what you will find on the internet.

That fruit is known as the golden apple, June plum or pomme cythere. When ripe it is so sweet juicy and delicious. You probably bought it under ripe but if you had allowed it to ripen to be soft sweet and golden you would have enjoyed it. When ripe it can be juiced to make a drink or boiled with sugar to make jam. Can also be pickled in lime and vinegar and stored in a cool dry place this is called making chow. Some people use it to flavour hot pepper sauce as well. Hope you get to try it again and enjoy it.

This fruit is here in Abia State, Nigeria. It is generally called Plum. You did so well describing the fruit just as it is..taste, texture and structure. I ate some of it about 15minutes ago and I can tell you for a fact that it is quite juicy. I don't need to be a nutritionist or biologist to confirm that it has nutritional benefits. I feel nourished

4
Can a convection microwave be used to dry fruit
5
What is this fruit?
4
Can salt make sour fruit seem sweeter?
1
How to pick ripe plantains for maduros?
1
Substitute apricot with some other fruit in this Sunny-Side-Up Apricot Pastries recipe
6
How can I make 'Santon sauce'
2
Mushroom soy sauce, brand identification or substitution