What is the name of this Ukrainian bread?

As part of a welcoming ceremony, Vice President Joe Biden ate a certain type of bread in a salt and bread ceremony put on by the very hospitable Ukrainians in July of 2009.. It was not your every day loaf of bread though- it was very elaborate.

what is the name of this bread? 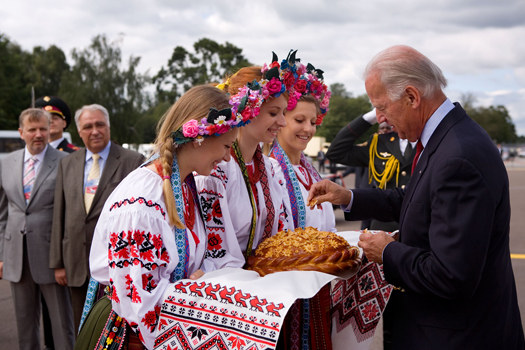 According to this site it is a bread called "korovai":

Korovai. A traditional braided wedding bread baked from wheat flour embellished with little dough flags and figurines (sun, moon, birds, animals, etc). Its origin is ancient, and it is a relic of the pagan belief in the magical properties of grain. Women prepared it while singing traditional wedding songs at the new home of the couple about to be married. The bride and groom were blessed with it before their marriage ceremony. At the wedding the korovai was kept in a prominent place, and the bride was greeted with it when she arrived at her new home. After the nuptials, the best man served it to all the guests; some scholars consider this ritual a manifestation of collective communion.

It's possible that the name and recipe is regional... as this site says that it's not the wedding bread but a variation of the Easter bread called "Paska", which is similar to Challah.

The Greeting Bread is basically the same recipe as the Easter Paska Bread, except that it has an indentation in the middle, for a small container of salt, accompanied by wine, which is used by the parents to greet the newlyweds, as they enter the reception hall. The parents, and the bride and groom, partake of the Greeting Bread dipped in salt, which symbolizes the bitter moments of life, followed by a sip of wine, which symbolizes the sweet moments in their married life. This also is a time when both families unite as one, and welcome the newlywed and their families into their family circle.

On this site, it seems to agree that korovai is correct, as the paska doesn't resemble the image you've included at all.

Ukrainian braided bread. This main ritual wedding bread has a circular form and is decorated intricately with birds, periwinkles, other ornaments made of dough. Ukrainian wedding bread is made of special dough similar to dough used for babka. Some other types of sweet bread can be used during wedding ceremony in addition to korovai — lezhen, dyven, shyshky.

Not the answer you're looking for? Browse other questions tagged bread food-identification or ask your own question.

12
why is my bread too tough?
12
Bread for the very beginner
1
yeastless bread help!
3
Slow-fermented bread doesn't rise
13
I want to duplicate my bread mistake!
6
What Makes Bread Gray?
4
"Acetone" smell on bread
10
I'm pretty sure these aren't scones, but what are they?
5
Which types of bread are well suited for overnight proofing and what adjustments are needed?
5
Replicating the thin, soft crust of Portuguese Sweet Bread