Is it possible to turn Rice Krispies back into rice?

Specifically, would it be possible to turn Rice Krispies into rice suitable for serving with chicken teriyaki?

One of the main characters of the webcomic Leftover Soup is an expert cook. To establish the character's skills, the author has him prepare a restaurant-quality meal from the contents of an extremely understocked kitchen, with only one hand. One of the feats involved in preparing this meal is reconstituting Rice Krispies into rice, to go with chicken teriyaki.

I have no idea how realistic this scene is. Is this actually something you can do with Rice Krispies? If this is possible, how would you do it, and would the results be any good? The author's notes say it'll be explained in the strip how this works, but by the time I stopped reading, it hadn't been explained yet.

Rice Krispies are made from a sweetened, malted and cooked and partially dried rice that is then "popped" similar to popcorn.

Each piece is made from a single, toasted grain of rice (...)

The physical/chemical process is basically the same as for popcorn.
Unlike corn, rice grains contain very little water so the initial boiling step introduces enough humidity inside the kernel. The partial re-drying to harden the shell allows it to hold it inside while the water turns into steam and pressure builds. When the grain can't contain the steam any longer, it will expand and the gelatinized starch forms a sponge-like texture. Note that a careful balance of humidity and drying is required to get the best results.

As you are changing the structure of the starch, consider this a one-way process. Neither popcorn nor puffed rice can be transformed back to their original "kernel / grain state":

The "modern" puffed rice method using pressure / sudden release is attributed to Alexander P. Anderson, who stumbeled about it when testing the humidity of grains in the early 1900s. The process was taken over by Quaker Oats and used for other grains as well. 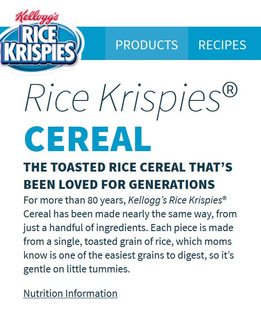 If I were to use the product in a savory application, I agree with @ElmerCat that the best way to do it would be to treat it as a crunchy element, like crunchy chow mein noodles.

In comments, you linked to the answer in the comic strip that made you wonder, so that answer is here 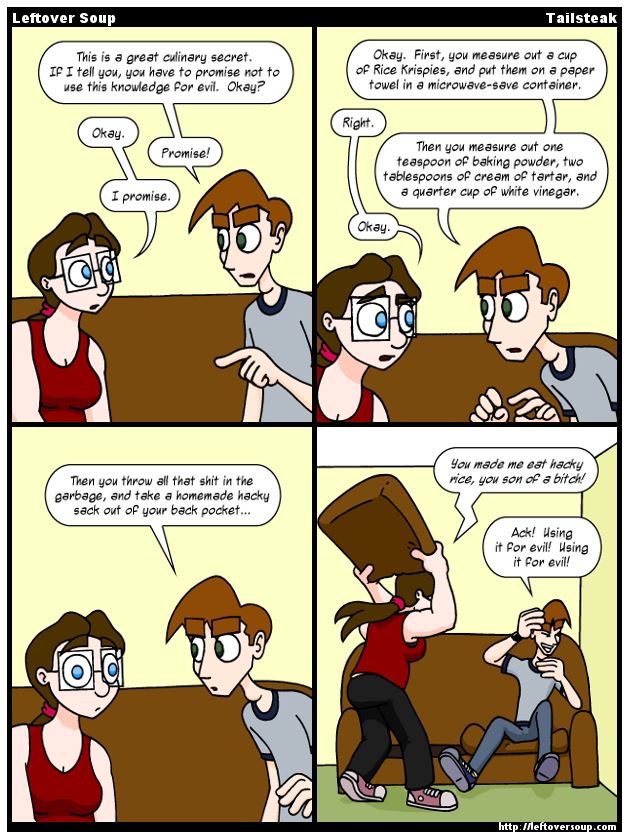 That particular comic is oddly apropos for Seasoned Advice :-)

If Rice Krispies are all you have to work with, then use them exactly as they are right out of the box.

It sounds interesting and possibly appetizing to think of Rice Krispies in a savory setting such as chicken teriyaki, similar to chow mein being served with crispy noodles.

As @Stephie correctly points out, you can't turn them back into actual grains of rice.

Not the answer you're looking for? Browse other questions tagged substitutions rice or ask your own question.

6
How to adjust for humidity when making rice?
4
Looking for a rice cooker, steamer, deep fryer, slow cooker combo that can cook rice and steam at the same time
15
Firm risotto using generic rice. Is it possible?
5
How do I make black rice turn out better in a rice cooker?
16
Cooking and storing rice for a whole week
2
Why are holes punched into rice packages?
0
Can I turn evaporated milk into unsweetened condensed milk?
2
Is it possible to (safely) make dry instant rice?
3
Is it possible to make rice porridge without simmering for 1 hour+?