Is picante sauce a type of salsa? 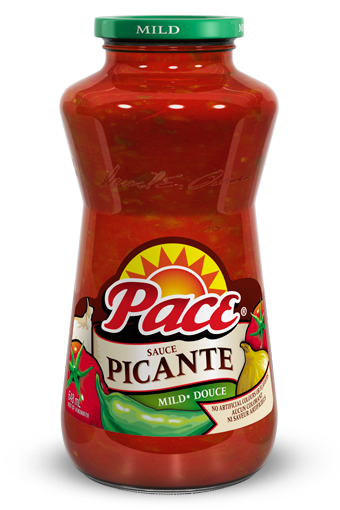 This was opposed to Pace's salsa:

Now I thought the first one was a "salsa", just a special type of salsa. However "salsa" doesn't appear anywhere on the jar. Furthermore on www.pacefoods.com, there is a distinction between salsa and picante sauce. This led me to believe that "picante sauce" is NOT a type of "salsa".

So technically speaking; ketchup, barbecue sauce, A1, ranch dressing and Tobasco are ALL salsas. However if you ask me to buy some salsa you obviously don't mean A1.

While the two terms are commonly used interchangeably in English, they are not synonymous, because picante sauce is a specific type of salsa.

So picante sauce IS salsa according to this website, however there is a contradiction because it says:

Picante sauce, on the other hand, has one distinguishing characteristic that sets its apart -- its intense heat.

Pace (who apparently was the inventor of picante sauce) sells mild, medium and spicy picante sauces along with salsas.

Are "picante sauces" a subset of "salsas"? Does a tomato based sauce have to be spicy to be "picante"?

There's not really a definition as precise as you're looking for. Picante sauce refers to either Pace or something similar, depending on the person. So yes, picante sauce is a somewhat ill-defined type of salsa - nothing that people call picante is not a salsa. As you point out, it does not actually mean intense heat; the regular/medium is not particularly hot and even the "hot" isn't all that hot, and people will refer to any variety of Pace Picante (or similar) as picante.

Pace's distinction between the two is more of a branding/marketing issue than anything else. They have to keep making picante, without changing the recipe too much and certainly without changing the name. They also want to make other things, and salsa is a pretty natural name. That doesn't mean their Picante isn't a kind of salsa, just that they're choosing not to market it as one. But as long as you consider basic mass-produced jarred salsa to still be salsa, Pace Picante is definitely an example of it.

The reason there's no satisfying answer or precise definition is that all usage of the term like this stems from Pace Picante sauce. It's just the name someone chose for their sauce in 1947, and since that sauce eventually became widespread in stores across the US - stores that likely didn't have a lot of other salsa - people ended up using the term in a more casual, generic way.

Salsa is the broader more generic term. Pace named their first salsa "Picante Sauce". Eventually it became popular enough for others to mimic. Hence it just means a salsa that is similar in texture and taste to the original Pace sauce.

Was just wondering this myself and looked at jar of Pace Picante. The real distinction from ordinary salsa? Pace Picante sauce includes vinegar, which is not normally included in salsa. Definitely e

I struggled over this in my years as a Spanish teacher. “Salsa” in Spanish is a noun which means “sauce”. “Picante” is an adjective which means “spicy”. “Picante sauce” is essentially “salsa picante”. If you don’t go to Pace’s website and read their definition, there is nothing in the words themselves to explain it. And if you are talking in Spanish to a native speaker and expect them to know the difference, especially since “pez”, pronounced “pace” means “fish” in Spanish- you will end up in a completely confusing situation.

12
How does one begin to create salsa?
9
Source of smoky flavor in salsa?
10
What is the "standard" salsa tomato?
3
What is the difference between a salsa, a sauce, a gravy, and a chutney?
1
Which salsa ingredient makes it taste like dirt?
0
Missing ingredient from Peach Salsa can I recan
0
How to correct bitterness in blended homemade salsa?
1
Salsa morning after taste
1
What is salsa criolla campesina of Nicaragua?