What type of wok apparatus is depicted in this home?

The following looks like a standalone burner, not just a wok ring. What is it called? What would the power output be like? Where can I find more information? 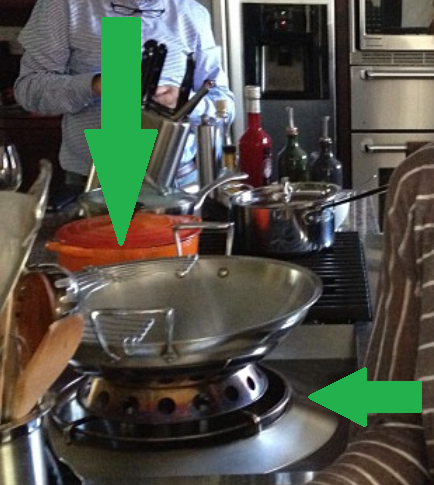 The upper green arrow looks like it is pointing to a frying/draining rack on the inside edge of the wok. The lower green arrow looks to be pointing to the base of a wok rink to a wok range. There would usually be another flashing or baffle to prevent the intense fire burning your hands or wok handle. It may be on the other side of the picture. That would be my best guess on it.

This is a hibachi, which makes this answer confusing, because what westerners call hibachi is actually called teppenyaki (flat top stylized and often theatrical cooking).

Further more the "grill", is not really called hibachi either, but rather shecherin. It was easier for Americans to say hibachi so that's what it's called. You can put a grill plate over it for BBQ or place a wok on it for that high temp stir fry cooking you can only get at that high heat and constant tossing.

What hibachi really is to a Japanese person is a brazier that hold burning coals for heating water for tea or just heating the room.

Look it up on Wikipedia, it's rather fascinating how the names of so many Japanese things have all been shifted around to market to America.

In commercial restaurant supplies, this is called a wok burner or wok stove.

Not the answer you're looking for? Browse other questions tagged wok or ask your own question.

8
Wok and electric hob - which ring to use?
8
Can I use a Wok ring on a gas range?
9
Thick carbon layer on wok?
4
Questions about a recently purchased wok
2
Should patina be burned (wok seasoning)
14
Wok patina comes off
5
Should I bother trying to use a traditional wok on an electric stove?
4
What gas output required for home stir frying?
4
Is this wok nonstick?