What's the difference between a cobbler, crisp, crumble, buckle, and betty?

I've heard all these terms at different times but never really understood the differences. What distinguishes various fruit-and-topping desserts such as a cobbler, crisp, crumble, buckle, or betty -- or are they all the same dish but with different quirky names?

Some of the terms may be regional but they do generally describe variations on a theme.

My general understanding of the differences are as follows:

Cobbler - A cobbler is generally a thickened fruit mixture with scone or biscuit-like top crust. Cobbler crusts, notably "Texas cobblers" can also be made with thinner batters that soak into the filling more than simply sitting on top.

This is an example of a blueberry cobbler with individual biscuits as a topping. 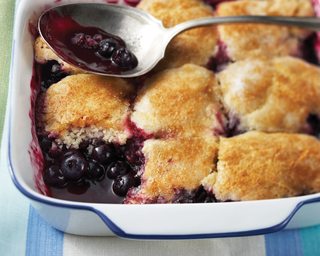 This is a "Texas style" blueberry cobbler, where the batter rises up through the blueberry mixture. 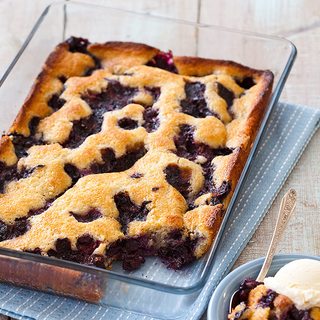 Crisp - A crisp is different as it has a "crispy" topping, usually made of a simple toasted mixture of butter, flour and sugar along with cornmeal or oats. The term is often interchangeable with "crumble".

This crisp has a topping of oats and optional nuts. 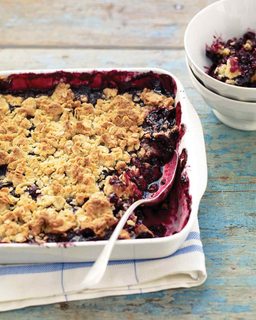 Buckle - A buckle is significantly more cake-like with large pieces of fruit (usually blueberries) are suspended within. It often has a stresuel-like topping. In some circles, a buckle is also called a crumble.

This is a blueberry buckle with a crumb topping. 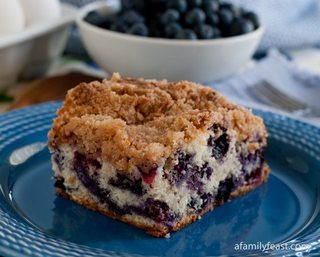 Betty - Also known as a "Brown Betty" is made with bread crumbs mixed with butter sugar and used as both a bottom and top "crust". These are very often (if not usually) made with apples.

This is an apple Brown Betty. 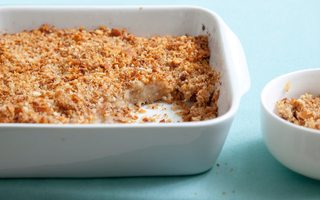 Here's a great resource for the differences in the above and several other similar dessert items.

This one's tricky, as there are some differences, but because different regions prefer one over the other, it's possible that some regions might conflate concepts under their preferred term. I thought I could easy answer the question, but a little bit of online research suggests it's pretty messy:

Some other terms that I only heard of when looking up what other's people take on these are:

Every reference I've found says that grunts and slumps are the same thing (even though the descriptions of the dishes vary by source). Pandowdy and Betty are frequently connected to each other in a similar way.

Not the answer you're looking for? Browse other questions tagged fruit dessert language or ask your own question.

9
Can pumpkin pie be made apple pie way?
5
Cobbler vs pie?
1
Umbrella term for the 'ingredients' and 'utensils' of a recipe?