Making toad in the hole with duck eggs

I've been keeping ducks for a couple of years, and therefore I cook with duck eggs, since they're effectively free. They're Indian runner ducks, which aren't very large, and the eggs are pretty much the same size as a large hen's egg, so I just switch them one-for-one, although the duck eggs have a bit more yolk and less white than a hen's egg. And they're better than hen's eggs for most purposes, with the exception of toad in the hole.

I use the Delia Smith recipe with double quantities of batter, and it always comes out big and fluffy with hen's eggs, but flat and stodgy with duck eggs, and takes 50% longer to brown properly. What's going wrong, and is there any way to fix this other than switching to hen's eggs, which I would have to buy specially? Use three whites and one yolk? Use different quantities of the other ingredients?

Toad in the hole batter, which is the same as yorkshire pudding batter, uses eggs for lift and partly as the binding agent. Lift comes from expansion of gases, including water vapor. Egg white is 90% water, yolk is somewhere around 40% water.

A large egg is usually somewhere around 60g out of the shell. With a hen's egg 2/3rd of that is white, so call it 44g of water in total (36 from the white, 8 from the yolk). A duck egg is usually about 1/3 white, so about 34g water in total (18 from the white and 16 from the yolk). So using duck's eggs you get 20g less water overall in a doubled delia recipe. Given that there's 260ml of water and milk already this isn't much of a difference, maybe about 6-7% total water content. This doesn't sound like much but it can make a big difference.

Fat-wise there's about 10g more fat in 2 duck eggs than hen's eggs. A hen egg yolk has roughly 5g of fat in it, and a duck egg double that.

Protein-wise white has a higher percentage of protein (7%) than yolk (5%), but that's not much so not likely to be causing issues.

As for the remedy I think you should definitely try 3 whites and one yolk, that should bring the balance back just right.

One trick recommended by a few chefs is to wait until your toad in the hold or yorkshire batter is fully expanded, then open the oven for a few seconds to let the water-saturated air out. This will help the batter to crisp up.

I have ducks and have been experimenting with making Yorkshire Puddings using their eggs. I always used to use 4 hen eggs, 140g plain flour, 200ml milk + seasoning, and that always worked well. When I substituted the hen eggs with duck eggs they never raised very well. After a little experimenting I found the following works well...

Bake for 10 minutes, then open oven door for 2 seconds to release moist air & close again. Then bake for a further 6 minutes.

Hope this works for you. I use an electric fan oven for this. 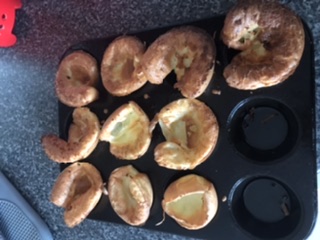 Duck eggs are high in fat and for a cake to rise it needs to be low in fat or no fat. Try halving one of the duck yolks and see if this makes any difference.

After further experimentation, I’ve made it work. I used a different recipe, and for each 100g of eggs I used one whole egg and made up the rest of the weight with egg whites (which took a bit less than two more eggs). Leaving the batter in the fridge for twelve hours or more also helped a bit.

In case of link rot, the new recipe uses 200g eggs, 150g flour, 25g water and 175g milk. For the same amount of flour, the Delia Smith recipe that didn’t work so well used two eggs (about 100g), 150g of milk and 110g of water. So the total amount of liquid is quite similar, but there’s more egg and less milk/water.

Not the answer you're looking for? Browse other questions tagged eggs batter or ask your own question.

12
In general, can I substitute egg species for either egg-only or egg-centric dishes?
12
Yellowness of egg yolk
6
Beating eggs & sugar when making gelato
11
Egg yolk sizes changed over the years?
3
Substituting different types of eggs
3
Are there desserts which use whole eggs (not mixing them in)?
10
Pickled Eggs with slightly gooey yolks?
1
Do I need to separate all the eggs if a recipe needs more yolks than whole eggs?
6
Eggs used as Binders
3
How to soft boil eggs with a countertop egg steamer?