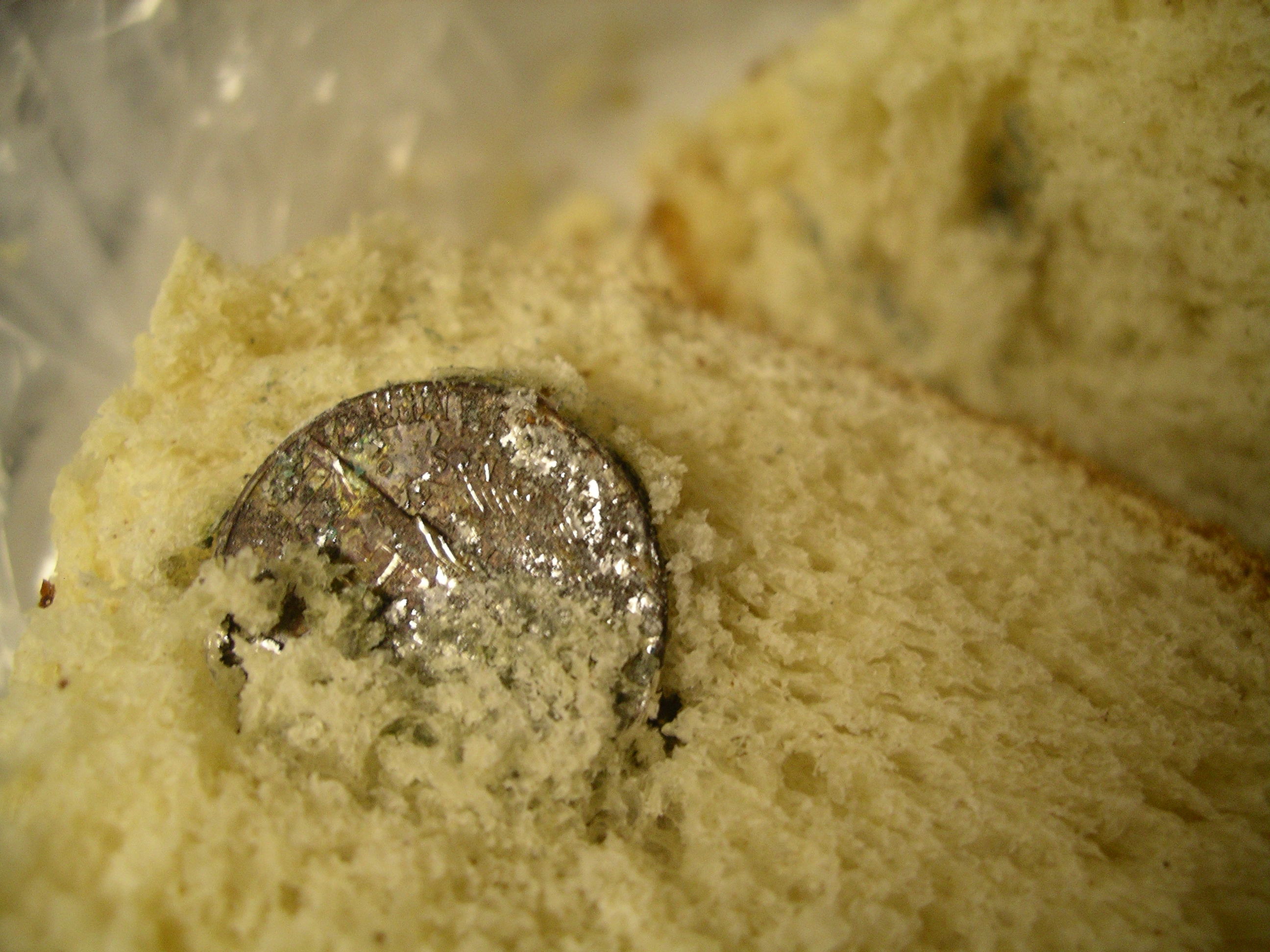 I know it is tradition to bake an inedible baby figure into Mardi Gras "King Cake:" 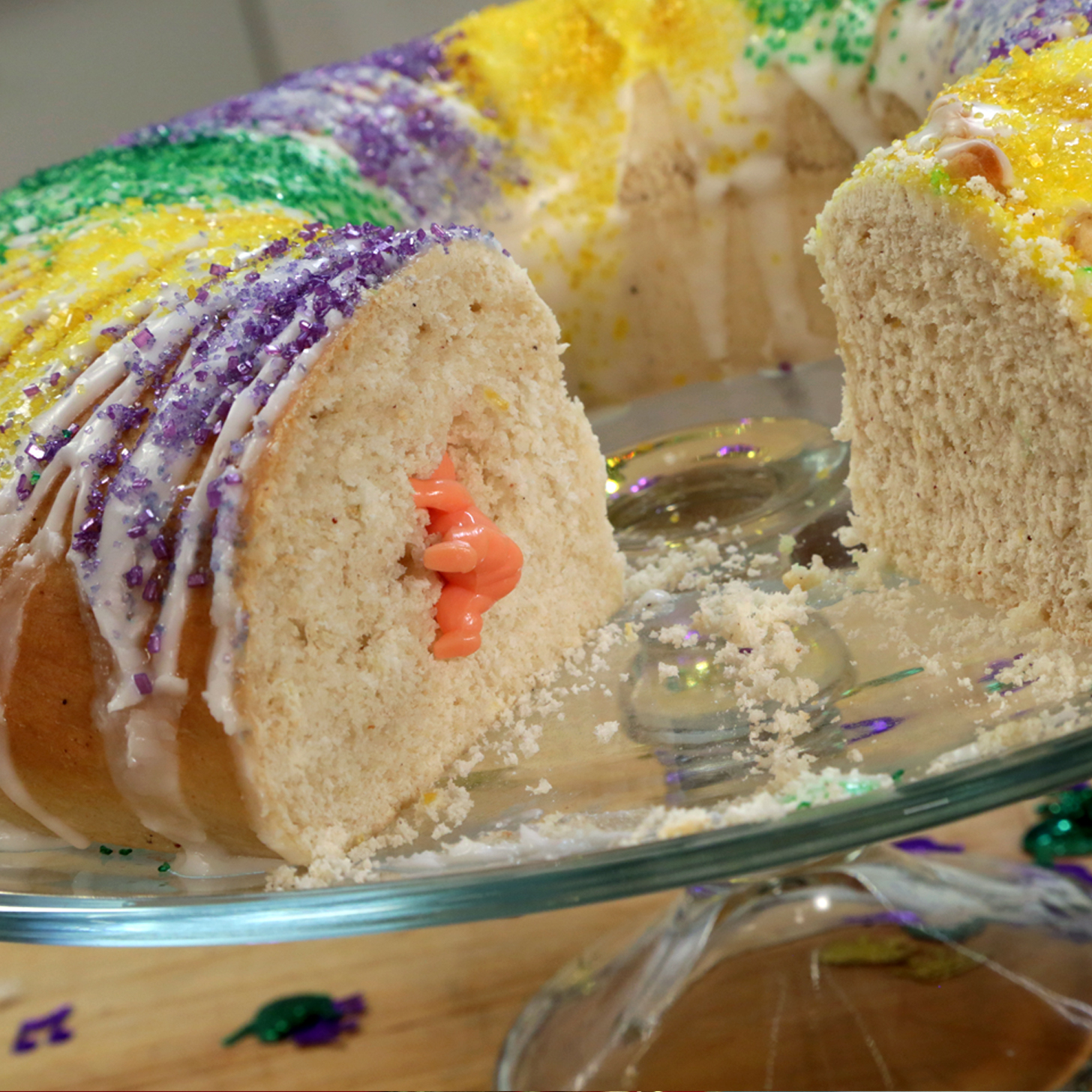 but I had not heard about this nickel/coin tradition.

Assuming one does not eat the actual coin itself, is it even safe?
Is there something special about the nickel metal, or is the use of a coin symbolic in some other way?

Yes, this is definitely a Greek tradition, a New Year's bread called vasilopita

Vasilopita (Greek: Βασιλόπιτα, Vasilópita, lit. '(St.) Basil-pie' or 'king pie', see below) is a New Year's Day bread or cake in Greece and many other areas in eastern Europe and the Balkans which contains a hidden coin or trinket which gives good luck to the receiver, like the Western European king cake. It is associated with Saint Basil's day, January 1, in most of Greece, but in some regions, the traditions surrounding a cake with a hidden coin are attached to Epiphany or to Christmas. It is made of a variety of doughs, depending on regional and family tradition, including tsoureki.

According to the article, the coins at one point were often quite valuable...

In older times, the coin often was a valuable one, such as a gold sovereign. Nowadays there is often a prearranged gift, money, or otherwise, to be given to the coin recipient.

Provided the coin is cleaned before being inserted into the dough, I don't know why it wouldn't be safe... coins aren't generally made with dangerous metals like lead and gold coins, as mentioned in the quote above, would be perfectly fine.

You don't say where you get "nickel" from... Greeks are on the Euro and I don't believe they use the term "nickel" for a five cent coin. They did have a five-cent drachma but it and other modern coins were made of cupro-nickel, a combination of nickel and copper, while others are made of aluminum or silver.

The coin is symbolic for religious reasons. Here's the story as related on a religious site:

One year, during a time of terrible famine, the emperor levied a sinfully excessive tax upon the people of Caesarea. The tax was such a heavy burden upon the already impoverished people that to avoid debtors' prison each family had to relinquish its few remaining coins and pieces of jewelry, including precious family heirlooms. Learning of this injustice upon his flock, St. Basil the Great, the archbishop of Caesarea, took up his bishop's staff and the book of the holy Gospels and came to his people's defense by fearlessly calling the emperor to repentance. By God's grace, the emperor did repent! He canceled the tax and instructed his tax collectors to turn over to St. Basil all of the chests containing the coins and jewelry which had been paid as taxes by the people of Caesarea. But now St. Basil was faced with the daunting and impossible task of returning these thousands of coins and pieces of jewelry to their rightful owners. After praying for a long time before the icons of our Master Christ and His All-Holy Mother, St. Basil had all the treasures baked into one huge pita. He then called all the townspeople to prayer at the cathedral, and, after Divine Liturgy, he blessed and cut the pita, giving a piece to each person. Miraculously, each owner received in his piece of Vasilopita his own valuables.

It's a tradition in Scotland as well. A boiled suet fruit cake Clootie Dumpling is when eaten at Christmas especially has small coins and charms included in the mixture. The mixture is put in a clean muslin cloth and boiled.

Although traditionally eaten at Christmas the pudding is also eaten at other times but the coins/charms are only used at Christmas.

Usually the coins used to do this now is the 5p piece. Before decimalisation it would have been 6 penny pieces or old silver 3 penny pieces.

There is a similar tradition in Bulgaria. On the Christmas Eve is served Christmas bread with a coin inside it. Then everyone takes a piece of the bread. The one who finds the coin inside his piece will be very lucky and happy during the next year.

The Christmas bread can be in different shape with variety of ornaments and symbols.

According to the old tradition the coin have to be silver, maybe because long time ago the coins were mostly made of silver. But today people use an ordinary coin.

I am not sure what is the metal which is used in coins today. It really changes the color of the bread surrounding the coin and maybe it is not a good idea to eat it. I have seen some people wrapping the coin in aluminium foil for backing.

The Christmas bread may have also a piece of cornel buds and a bean. Then the coin is for wealth, the buds for health and the bean for luck.

Not the answer you're looking for? Browse other questions tagged baking food-safety bread greek-cuisine traditional or ask your own question.

9
My bread is tasteless
4
Substituting hazelnuts for almonds, baking
3
Replacements for baking soda in a cake
4
Cake Cooking Time: Burning on outside - raw in the middle
5
Very very soft bread
2
Baking bread without yeast
1
Is there really a tradition of some kind to eat white bread when it's hot outside and dark bread when it's cold?
2
How can I reconstruct my Grandmother's recipe from just ingredients?
1
Packaging/Bottling and Uncooked Hot Sauce