I was recently reading a cooking manga named Shokugeki no Soma, in which the protagonist uses unconventional methods to cook specific dishes. In one chapter, he uses honey specifically to tenderize meat in a short amount of time. Here's the chapter page specifically: 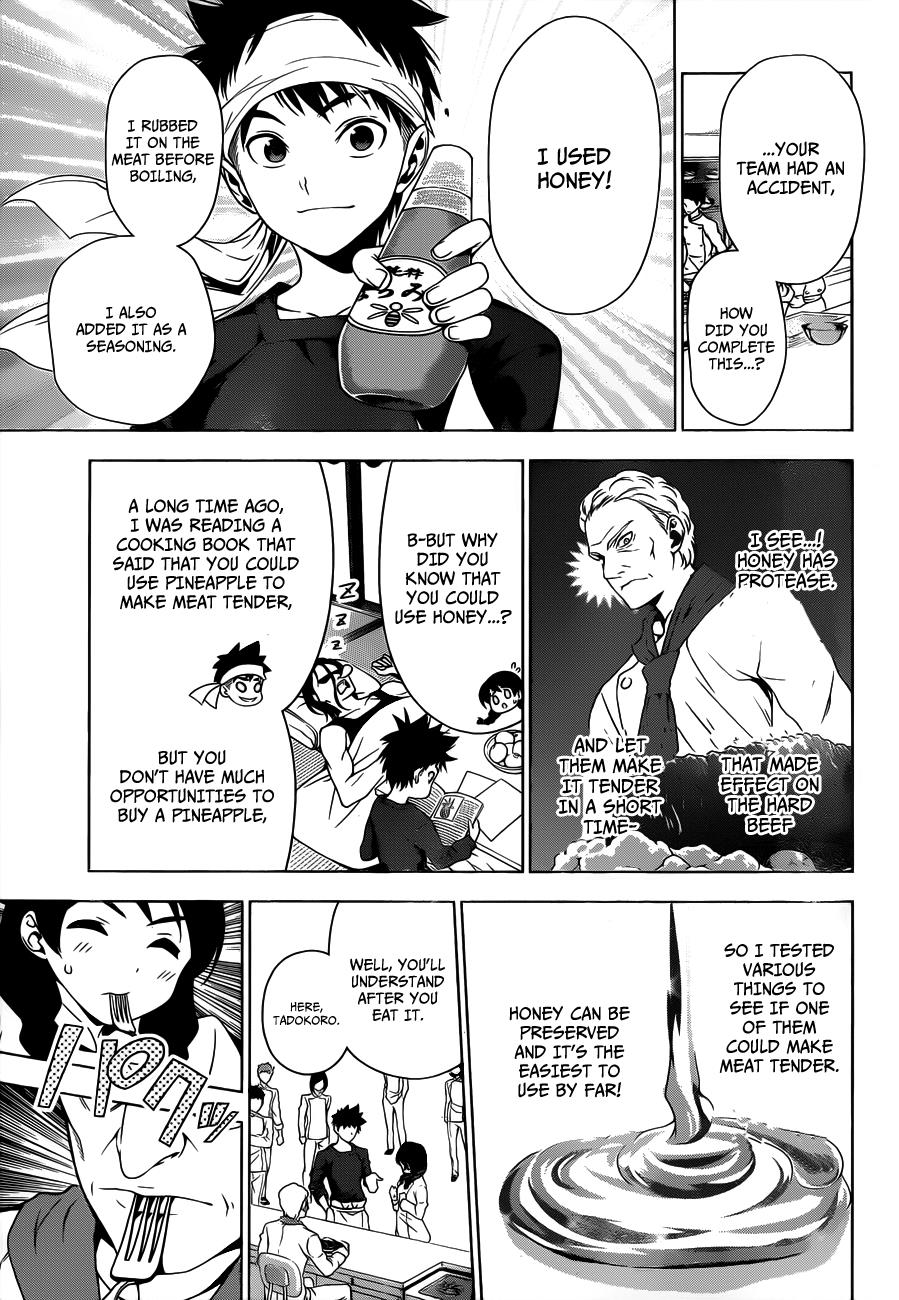 I tried it for myself but can't seem to replicate the same thing he's done, if anything the beef remained relatively hard, and not soft as the manga describes. While some scenes are somewhat outlandish there is a certain truth to most of the cooking terms thrown around in the manga, so I'm curious: does honey actually contain proteases that tenderize meat quickly?

This article on LIVESTRONG.com seems to support the other fact in the same page which claims that pineapple can be used to tenderize meat, but it doesn't make any reference to honey at all.

If you're curious, this is the anime version of it:

Based on the description given in the manga (specifically "I rubbed it on the meat before boiling" [emphasis mine]) I would guess that this is not actually an effect of tenderization at all. Instead, the effect is possibly closer to that of velveting.

The velveting technique is typically done with a thin coating of corn starch, and my working theory is that this seals in the natural juices of the meat while preventing the outer layers from drying out. Being thick and viscous, honey might have much the same effect. As a result, the final product seems more tender, but that's just because it's been more delicately cooked - not due to any special tenderizing power of the honey itself.

Yes honey tenderizes meat, though not to the degree shown and only if it is A. real honey not honey flavored rice syrup or sorghun syrup as most cheap honey is (Chinese Honey exports mostly) and B. It must be raw and unfiltered honey.

Bees eat a mixture of pollen proteins and honey and thus create and excrete special proteins that help breakdown other proteins. These protein enzymes are mixed with the honey because of the processes that occur in its creation, transportation, and preservation within the hive. Depending on the type of honey the pollen inclusions can also play a role in protein degredation. However, processing the honey often involves heating which denatures the native proteins rendering them ineffective.

I have used a honey and olive oil based overnight marinade for decades and in my opinion it definitely tenderises. I dont pretend to understand the science but in practice I find it works, and is extremely tasty.

Yes, it will work by osmosis, but not very well, and very slowly. It will take lots of time, just like salt does. You tenderise by either adding enzymes (which honey does not have, because it is very pure without any proteins or fats, energy storages of bees) or activating enzymes...like salt does by breaking cell walls or getting fluids between the cells. Honey does that as well, but not as effective. Acidity will also destroy cells and activate enzymes (or inhibit the destruction of other enzymes) and tenderise, but that is not an enzyme reaction.

Time and salt are your best options. Acids and plant enzymes will mainly work on the surface, and likely mush up your meat.

Honey has a low pH but it is far too viscous to penetrate pores.

It's possible that a specific variety of honey may contain enzymes that would tenderise meat, but standard commercial honey would act as a preservative.

Not the answer you're looking for? Browse other questions tagged meat honey tenderizing or ask your own question.