How is a Southern U.S. style "peach cobbler" different from "peach pie"? It seems to use pie crust rather than biscuit dough, and it's a woven top, not cobblestones. I'll bet if I put the same recipe in a square disposable foil pan and a round glass pan, people would call them cobbler and pie respectively even though they're the identical contents.

Cobbler is a funny creature. In general, even in the South, many cobblers only have a single, top, crust and it is usually not a pie-style crust. It is usually more biscuit like: 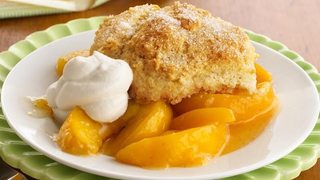 They may also have a single top pie crust, either solid or latticed and some of them do have a double crust, though it doesn't usually come up the sides of the pan.

There's a restaurant in town that we went to in the summer and we ordered a peach cobbler. Upon receipt of our cobbler, I (slightly inebriated from a very strong margarita) dubbed it a "pobbler" because it was a pie with two crusts and not the true cobbler I was expecting. I spent the next 30 minutes laughing about my new term.

So, to address your statement about changing the pans and calling them different things, I'd argue that, to some degree you could do that... but many wouldn't say that a pie in a square pan is a cobbler, simply because they don't believe that cobblers should have crusts. Use the newly minted, proper term for a square pie/crusted cobbler: "pobbler".

In general, though, the filling of a fruit pie, cobbler, or crisp can be identical with only the crust/topping treatment to discern them. In fact, my favorite Dutch apple pie recipe offers the simple variation of turning into a Dutch apple crisp by following the instructions, omitting the pie dough and baking in an 8-inch square baking dish rather than the pie dish.

As a note, due to the crusts (which you want to keep dry rather than soggy) and wanting a pretty wedge slice with the filling staying put, pie fillings are generally thicker than cobblers, where it's fine if the filling flows all over, so a recipe for blueberry pie may include additional thickeners like potato starch or tapioca powder to solidify the juices that are released from the fruit.

So, you want your pie to look like this: 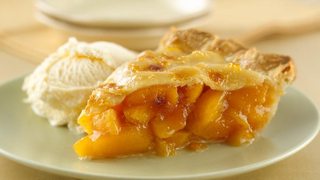 And you want your cobbler to look like the image at the top, without the starch to solidify the filling.

My favorite baking book includes recipes for both blueberry pie and blueberry cobbler (biscuit style topping) and they differ for specifically this reason. And, because it's an awesome book that explains why they make the choices they do, they explain why (emphasis added):

Blueberry pies traditionally rely on four or cornstarch to thicken the fresh fruit filling. We sometimes find these thickeners problematic. We thickened our blueberry cobbler with cornstarch with good results, but a pie requires a firmer filling than a cobbler and hence more cornstarch. If you use cornstarch, it will thicken a blueberry pie quite well. But in our tests, such a large amount of cornstarch dulled the fruit flavor and made it noticeably less tart.

This will depend greatly on the fruit. Some fruits are juicier than others so, while an apple pie/cobbler would need no adjustments, fruits like peaches and blueberries will need to add or increase the amount of thickener in a pie.

I grew up (in Texas) enjoying cobbler on a frequent basis. Deep pan, a layer of biscuit dough on top with just a bit of dough dropped between, I guess you'd say layers. Nothing else like it,delicious, warm from the oven. It was biscuit dough. It wasn't pie crust, it wasn't thick dough, and it certainly wasn't batter poured in the bottom to rise through the fruit. (That's a whole other recipe, not cobbler.)

Not the answer you're looking for? Browse other questions tagged pie language or ask your own question.

13
What's the difference between a cobbler, crisp, crumble, buckle, and betty?