Is sambal generally more, or less spicy than the pepper it's made of?

I recently bought some Sambal Jolokia Badjak, which is made from the Bhut Jolokia and thus quite spicy. 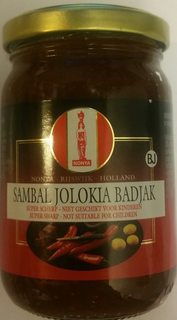 So I was wondering, how does the Scoville rating of sambal compare to the peppers it's made of? Is it generally more, or less spicy?

By logic, I would assume the Scoville rating of any sambal to be at most the same as the peppers it's made of. It can never get hotter than it was, and in general, and certainly for store-bought sambals, there will always be stuff added, lowering the (perceived) hotness.

Badjak always implies fried peppers. It also tends to include onion and garlic, and whatever else the local tradition or family recipe dictates. And it tends to be milder than the Oelek (or Ulek) variant, both because of the frying, and because of the additions.

The Oelek/Ulek variety is plain, hardcore, grounded peppers, with most likely a touch of salt and a souring agent for preservation. Oelekan/Ulekan actually is the "pestle" part of a mortar and pestle. For store bought oeleks, I simply look at the ingredient list and percentages, and take the one with the highest amount of peppers, and least amount of additions. Current record is 96%, with salt and vinegar making up the remaining 4.

Wikipedia actually has a very nice article on sambal.

Not the answer you're looking for? Browse other questions tagged spicy-hot or ask your own question.

13
What is the world's hottest pepper?
6
Making Medium-hot Mexican Sauces
17
Counteract the negative effects of spicy ingedients with other ingredients
34
How can vegans alleviate the effects of spicy food?
2
What spicy ingredients hit the sinuses?
0
How to get the most chili flavour out of a chili pepper?
3
How can I process Hot Pepper without killing the spice (capsaicin)?
6
Why is spicy food less spicy when it's allowed to cool?