I have never been successful in making pan-fried potatoes àla the American diner. It seems like such a simple concept, but they never turn out right! Usually undercooked & oily, with some parts getting burned...

Ideally, I'd like to produce potatoes that are crispy and golden brown on the outside, fully cooked and soft on the inside, and not excessively oily. What are the important factors to ensure this?

I have yet to find a combination of values for these variables that produces proper hash browns... What are your guidelines for making breakfast potatoes? Which of the above variables are important? Are there any other keys that I am missing? It seems so simple when diners do it; I can't figure out where I am going wrong...

Edit: I was afraid this would happen... terminology clarification: apparently I'm looking more for "home fries" or something to that effect. I do not want a solid potato pancake àla McDonald's hash brown; I am looking for pan fried potatoes; the pieces should be seperate (although they may stick together a bit in places). Some pictures I've found that seem to be more in line with my thoughts: 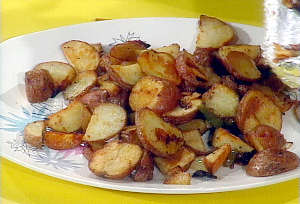 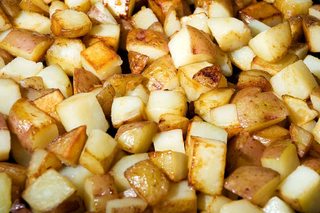 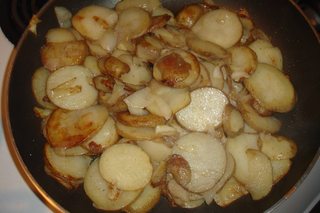 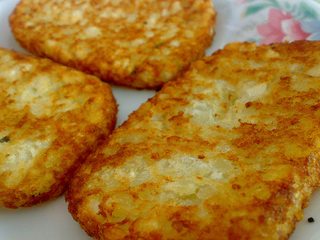 It sounds to me like the issue may be that you're crowding the pan.

Basically, to get everything nice and brown and crispy, you need enough space for all of the steam to escape. That picture you showed has potatoes stacked on top of each other -- that means as the bottom items cook, they're going to end up steaming the items above them.

At a diner, they have a large griddle to work with -- they can really spread things out. You're not typically that lucky in a regular kitchen, as you don't have as much space, and you have a lip on the pans that'll hold the steam in.

So, either work in smaller batches, or consider recipes that use an oven -- using sheet pans instead of a pan on the stove solves much of the problem.

One other trick is that most diners don't start from raw potatoes -- maybe with hash browns, but not for home fries, you're not going to get the nice soft interior in a reasonable amount of time unless you start with a potato that's already been baked or boiled. (If you're doing things in the oven, you might be able to, but not in a pan)

Just for reference ... I have a 14" cast iron skillet that I use for home fries ... and it's about the right size for cooking a single large potato, which might be two servings, maybe three for kids. (I tend to cook carb-heavy meals).

update : I probably should've stated this directly -- you want the chunks of potato to form a single layer in the pan, with space in between them.

I generally use Russet potatoes, because they're always on hand at our house. I've tried Yukon Gold as well, and red potatoes, both with success. Sweet potatoes can be a nice treat if you want to mix it up a bit.

Cubed seems to work better than slices if you parboil, though you can get a similar result if you increase the temp when you fry them a little.

I've had good success with parboiling the potatoes first. 10-12 minutes max, you don't want to overcook them. You can parboil them the night before, which is very convenient. I've also been told that helps them dry up a little bit, though I don't find the difference in frying to be noticeable. However, patting them dry right after parboiling does seem to help. Temp when you fry them should be pretty high, I have an electric range and use 7 out of 10 or so, so make sure you choose an oil that can take it. These are meant to be fried, think about the classic deep fried food you've had and how the outside was crispy but the inside was soft. Based on that, I use a little more fat than is probably necessary - this also ensures the temperature doesn't drop much when I throw the potatoes in. I'd estimate I go 1/2 way up the sides of the cubed potatoes. If your potatoes are burning, you can turn the heat down to medium and cook them a little longer - as long as you parboiled them, you don't have to fry them over a high heat, I just prefer it. Make sure not to do too many at a time, you can always keep batches warm in the oven while you finish the rest if you're cooking a lot of them.

For best results I find that bacon fat is king, and butter runs a close second, but I've done it in olive oil and grape seed oil (both much healthier!) with success as well. The most important thing is that you get a screaming hot pan, and a fat that can stand up to it. If you find you're burning your butter off too fast, go with a 50/50 mix of butter and a high smoke point oil.

Oh, and you want to use cast iron here if you have it!

Diners have a different set of constraints than you: they want to dump a big pile of potatoes on the griddle at 5am and keep serving from the same pile until 10. Their "recipe" is optimized for a griddle in continuous use. The tastiness comes from all the bacon fat they keep scraping over from the bacon area to the potatoes area.

Do you have to fry them? Oven roasted potatoes may be a lot closer to what you're looking for.

I like doing this with the little red potatoes. Cut them into 1/8ths, toss with olive oil, salt, pepper, and a little bit of rosemary, put them on a cookie sheet or in a glass 9x11 pan, and roast at 350°F for half an hour. About halfway through, you can stir them around a little bit.

Don't discount the "cook before crisping" idea though. Classic Belgian 'Pomme Frites" are first blanched in oil, then the temp is turned up and then they are crisped. This is also how McD gets crisp outside and soft in the middle texture for their fries.

Other foods use this technique too. Roast in a normal oven at 350F then crank it up to 500F to crisp the outside (roasts, turkey)

But for classic hashbrowns / homefries the easiest way, if you have the space, is not crowding the pan and remove excess water as quickly as possible.

I experimented with Hashbrowns (I assume this is what you are talking about) for a while having much the same problems you did, and found the best technique involves grating into a clean tea towel, then wrapping tightly to squeeze the water out and then adding grated onion.

Parboiling doesnt seem to help this - its removing the water that helps.

Season the squeezed potatos well - they can take alont. I dont use an addional egg to bind, but depending on what type of potato I may use a little flour, usually on the outsides - seems to help build a crust to keep it together.

Once formed into patties I shallow fry them on a medium/medium high (depending on thickness) and they usually seem to come out well - crispy but nice in the middle.

I have pretty good luck with home fries by using a spray oil in a non-stick skillet. It helps if the potatoes are dry and not wet. I will blot them with a paper towel, and even toss a small bit of potato starch on them (I'm sure corn starch would work well too).

I used a small dice when using raw potatoes and starch. If I happen to have pre-cooked potatoes (usually leftovers from previous dinner) when I will make large cubes.

I found it almost completely foolproof to use a non-stick pan with a tight-fitting lid. It's basically a one-pan steam/parboil and fry process - limited to fairly small batches, though.

Here the recipe for second photo from the top up there.

I put home fries through the grating blade of my food processor or through the julienne setting of my mandolin. Then, I squeeze out the water by putting the processed potatoes through a potato ricer. Gets all the water out quickly. then it's just a matter of dumping the potatoes in a large area pan on the stove with some olive oil (not extra virgin) and some chopped onions and fry on medium heat, turning when one side is crisp until it's toasty brown and just before serving clump it up a bit for a few more minutes.

13
Which oils or fats make the crispiest roast potatoes?
6
Why didn't my pan-fried potato wedges turn out crispy?
7
Maintaining crispy fried potatoes while cooking with onions and peppers
5
American "Bacon Roll" - what is it?
2
Oven semi-baked semi-fried potatoes starting from raw (for the lazy cook)
1
Why won't my potatoes crisp?