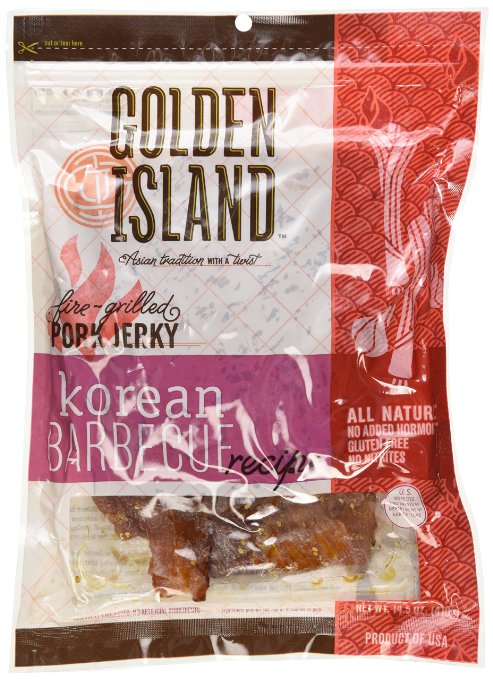 It's delicious- it's soft but chewy, smokey, sesame-ey, moist with the sugars but obviously also dried enough to not need refrigeration.

I've tried making it myself with mixed results. The marinade is easy: ginger, sesame, brown sugar, etc. The flavor is good but my texture isn't quite right. I tried my normal jerky method which is to marinate and dehydrate. As you would expect, the sugars didn't caramelize correctly and the meat didn't take on the soft, chewy, candied texture that I crave.

The labeling and the texture imply that the meat is cooked. A Chinese pork "jerky" that I learned about from this question is only cooked. I want the meat to also be preserved so only roasting/grilling is insufficient.

There are several questions here:

How could I both cook and preserve my pork?
The options that come to mind are:

Is there some other method that I haven't thought of?

It does not appear to be a korean dish, rather a version of the chinese pork jerky, which has been seasoned with a korean bbq style.

How could I both cook and preserve my pork?

The options that come to mind are:

Smoking until dehydrated (requires much more effort as I think it would have to be a cool smoking over a long period of time) Grilling briefly for flavor and then dehydrating until done. (does partially cooked meat still dehydrate?)

You could hot smoke the meat to be completely/partially cooked, before considering a preserving process.
Similarly grilling/broiling/roasting, before preserving. Of course you can dry/dehydrate most things that have water content.

Is there some other method that I haven't thought of?

If following the chinese jerky process I have seen, either:

You also need to consider whether you wish to have mince & reform the meat, or slice the meat thinly (eg meat slicer).

I marinated the meat for 24 hours in the Korean No1 Marinate and I added more brown sugar sesame seed and 1/4 can of coke and sprinkle of salt when I put the meat on the dehydrator. The dehydrator is with the heater and fan. I still rotate the trays every hour. The meat stayed soft, chewy and very tasty.

Not the answer you're looking for? Browse other questions tagged pork jerky korean-cuisine or ask your own question.

9
Chinese pork jerky: what makes them so tender, how do you make it?

9
Chinese pork jerky: what makes them so tender, how do you make it?
4
Oven Jerky a Possibility?
3
Which Korean dishes are typically hottest?
3
Is jerky safe concerning parasites?
5
Keeping beef jerky dry?
3
Sous Vide Pork Butt Char Siew (Chinese BBQ)
11
What's the difference between jerky and biltong
3
Giant parsnip from Korean shop
3
What can I substitute for hot Korean chili oil in this pork noodle recipe?