I don't know a thing about cured ham, but I just opened this ham, and while I realize a cured ham probably has a peculiar smell, I can't imagine this horrific stench being intended. My entire apartment smells like a trashcan on a hot day, and the ham has both black and green spots on it. Seven meters away, the smell is still strong enough that it just about makes me gag, and every instinct I have is telling me this is not edible.

tl;dr: are jamon serrano hams supposed to smell overpoweringly like old mouldy food, or did I just blow $80 and a perfectly good towel on a worthless chunk of rot? 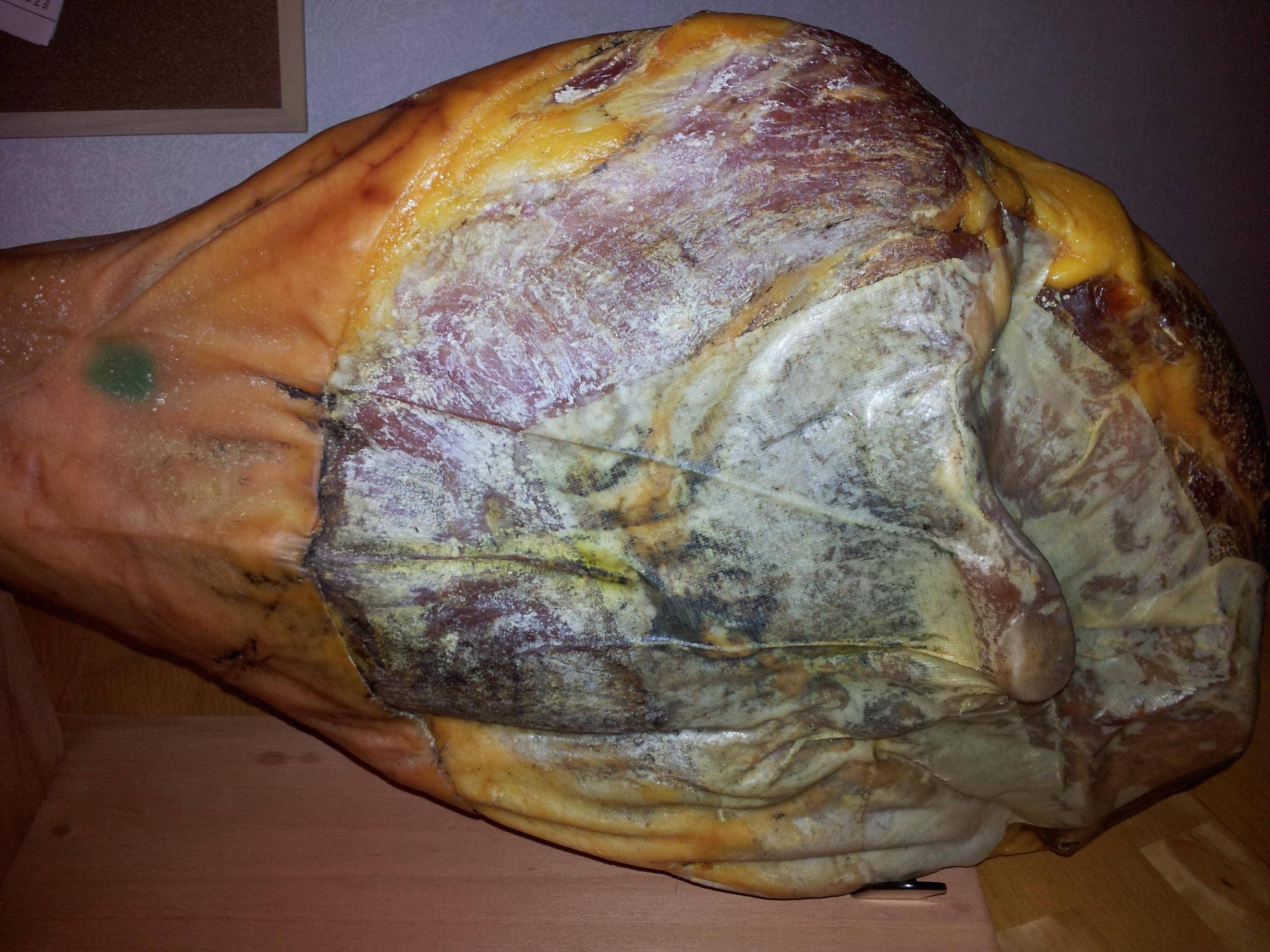 Follow-up: I've been in contact with the store, and I'm going to go get a refund. I showed the ham to some knowledgeable people in real life as well, and they agreed that it's spoiled. Thanks a huge lot for all your helpful answers!

The green from the picture looks.. strange. I'd expect a brand/tattoo, but not a green spot like that.

It should also not be dry and flaky. It has been cured with salt, so that may be what you're seeing.

Some hams will smell weird right out of the packaging. I don't think I've experienced one as bad as you're describing, though, but it could be the mold. I suggest cleaning off the mold and slicing it to see how the fat looks. Yellow fat is rancid and will stink. The fat should be white.

You might see yellow on the outside and white on the inside. In any case, the yellow shouldn't be more than a couple of millimeters wide in a slice. Just to be clear: DON'T EAT THE YELLOW FAT.

--answering your comment on another answer - the "outside" part of the ham will have skin or just fat, but the "inside" part will have exposed meat, and bone. Sometimes that will be covered with plastic or fabric, but you should take that off and clean the ham since it smells.

Also, cut and discard a vertical slice from the exposed side before you get ready to cut slices so you don't have to cut it off the individual slices. You can do the same for the yellow fat, but be careful not to cut all the fat off. A smaller knife makes this easier.

Nope, Jamon Serrano should not smell bad. It can be normal for it to have mold on the very outer surface, which is generally harmless and can just be scrubbed off, but a foul smell means that there is something wrong. I'm afraid your ham is trash.

Microbiologist here. That meat is clearly spoiled, please don't eat it. While you could clean the mold off the outside, the discoloration and smell suggests that other microbes are at work too. Save yourself the intestinal pain and just toss it out.

As others have said, your jamon is almost certainly spoiled.However, I wouldn't throw it out just yet.

I assume you bought this jamon recently, or at least close enough to this moment that it hasn't turned spoiled while in your possession. If this is the case, it was likely already spoiled while in the store, which means the store essentially sold you a defective product. In many western countries, this means you are entitled for a full refund, provided you kept your receipt of course. From comments I've seen that you're already planning on this route, but I just wanted to reiterate it for any other people who have this issue.

Note: the above statement is void from any warranty for accuracy as legal advice. I am not a lawyer and do not pretend to be one. If you are not sure about the laws in your own country, first get the advice of an official lawyer.

Serrano ham has a much "milder" and nuttier taste than regular prosciutto. That is the beauty of the Serrano - made from a heritage breed of a specific type of hog, fed delicious nuts - the ham is mild, delicious, and should literally melt on your mouth - Anthony Bourdain likes to smear it across his lips too before devouring each piece, so you could do it that way too. It should definitely NOT have any mold on it. The type of ham that is sold in a sealed package is usually trimmed and cleaned of any naturally occuring mold prior to packaging. The best way I can describe the delectable smell of Serrano ham is: a tang of spicy musk, followed by an overall sweet nuttiness, as well as earthiness, a sharp yet pleasant overall sensation - you can tell this will have a lot of umami prior to tasting.

Not the answer you're looking for? Browse other questions tagged mold ham smell or ask your own question.

20
How do you remove garlic smells from your fingers?
9
Is it safe to eat a lump of Jamon that grew some mold?
12
Chicken smells like eggs
10
What's the difference between Prosciutto, Jamon Serrano and Speck?
3
Is it possible/advisable to slice deboned Jamon Iberico on a mandoline?
0
Is getting rid of the dough the only solution when it smells of yeast?
1
Fish from local chip shops smells fishy, but not from one shop?
1
How to contain trash/waste food smells?
2
cake smells bad of egg, is dense and rubbery
1
Is there any food ingredient that tastes like diesel smells?