Why do my snickerdoodles always come out flat?

I've made a lot of variations of snickerdoodle recipes and I always seem to get the same results. I can make a thick chocolate chip cookie but snickerdoodles vex me. No matter what recipe I try, they always come out flat like this: 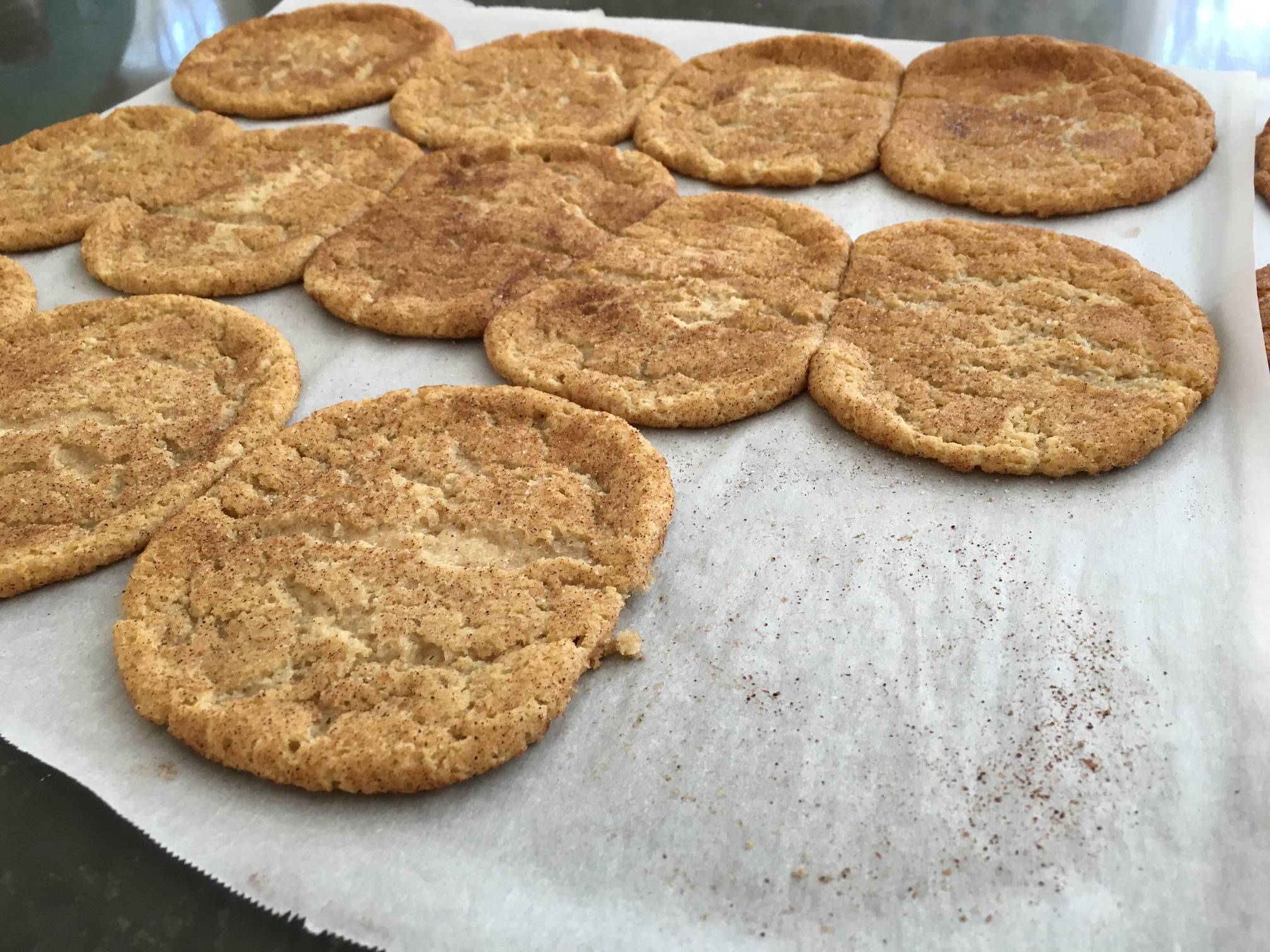 My oven is calibrated, my baking soda is fresh, and all of my ingredients are weighed. I preheat my oven and then wait 30 minutes until after my oven says it's up to temperature. I chill the dough 30 minutes before putting it on the sheets. This recipe I made today (results shown in the picture) is a merge of Cook's Illustrated's and Baked's (which were mostly similar anyway) but no recipe has ever given me the tall, fluffy cookie pictured in the cookbook:

Any ideas on what I'm doing wrong?

FWIW, the flavor is great, and if I fold them in half, the texture's great too. :-) Per request, here's a picture from Baked's cookbook that has results I'd like: 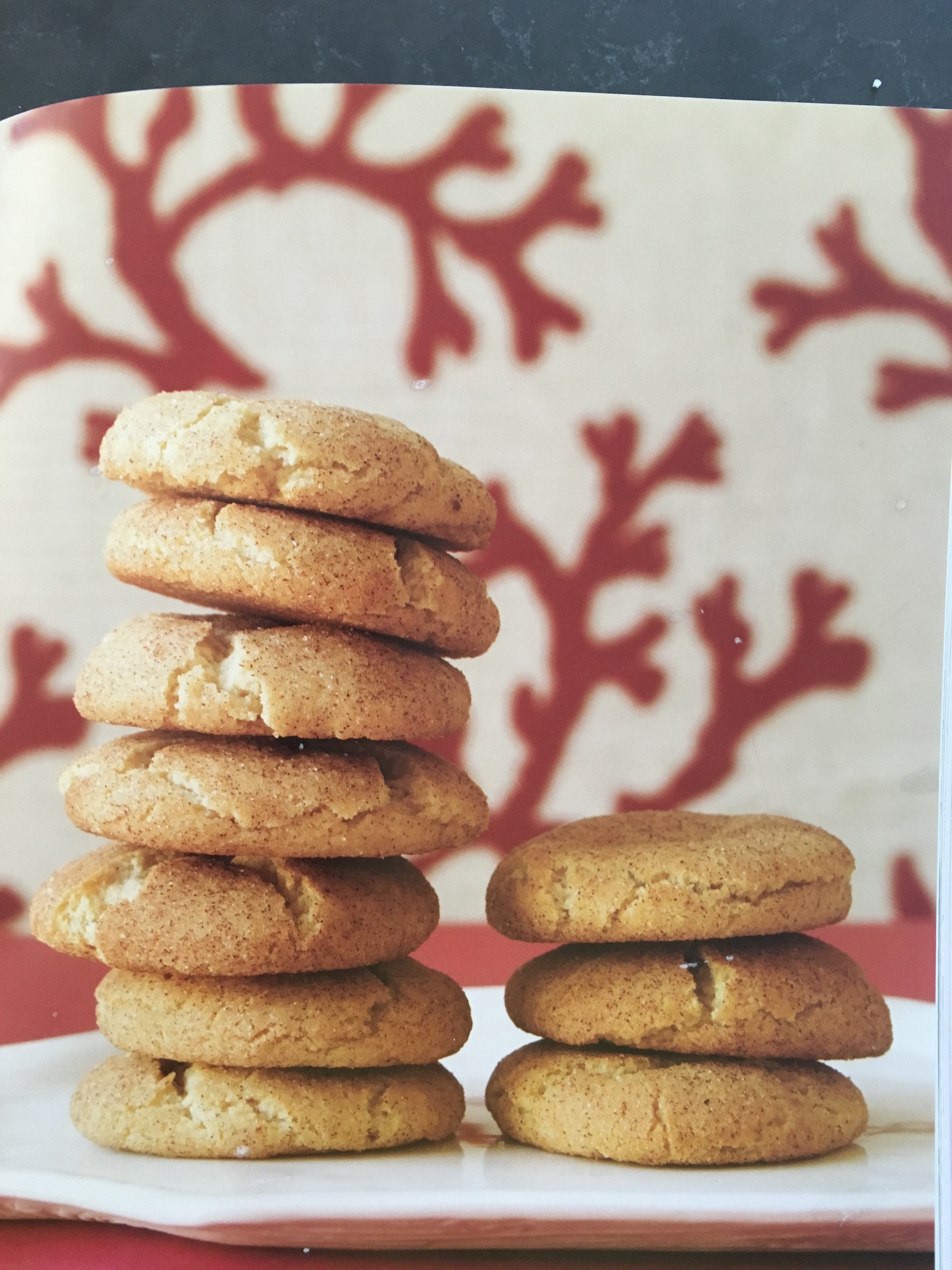 While I haven't made this specific recipe before, I have made the Cook's Illustrated/America's Test Kitchen recipe many times. As you say, it is very similar - it uses slightly less flour and it uses white sugar exclusively.

One thing I will say - Snickerdoodles are, in general, pretty flat cookies. There are dozens of photos out there that show this to be the case. This site follows the CI recipe and you can see that they're pretty flat from the image at the top of the page: 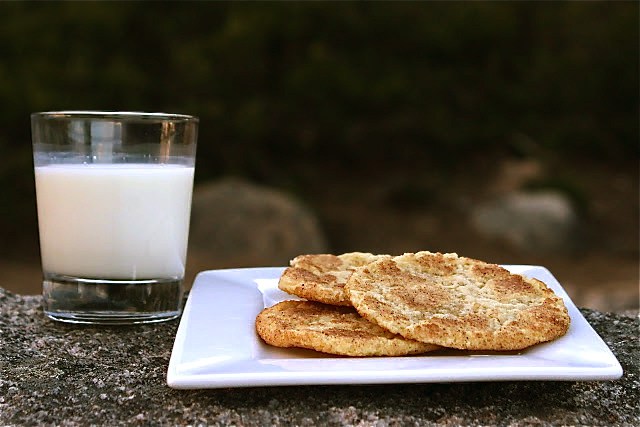 This recipe does not turn out cookies that look like the ones in the photo you've posted. Never has in the 5+ years I've been making them. The tiny changes in flour and sugar are unlikely to have that much of an effect on the outcome.

Now, I do think that you may have a bit of trouble because they do seem a bit flat, even for snickerdoodles.

I find the biggest error that gets made with this cookie is overbaking. To stay soft in the center, these need to be just barely baked, the edges just beginning to darken and crisp. The only brown on the underside of the cookie should be from the cinnamon.

If they look undercooked in the middle, that's good. Generally, when I bake them, they get really shallow at the edges and have a poof in the center, which flattens out after baking.

If they have any snap after fully cooling, they're overbaked.

It is also possible that the overcrowding is part of the issue. When the cookies glom into one giant cookie, they can't cook all around evenly, so the signal to look for I've mentioned (and that is mentioned in the recipe) to tell that the cookie is done can be either delayed or never come at all... which means it's easier to leave them in too long.

Bake times are averages. You really need to use them as a guideline and focus instead on the signals the cookies give, like fragrance, browning, and shape.

The ATK recipe specifically calls for baking soda & cream of tartar, rather than baking powder, so that the cookies will be flat and chewy. What you're looking for is a more cake-like cookie. This calls for altered cookie chemistry.

Note: I wouldn't try all of these things at the same time. Start with one.

In general, flattening in cookies means the dough is melting before it is setting from the heat. The fats and sugars will tend to melt, so to counterbalance that you would need more structure - either a bit more flour, or possibly tweaking the amount of egg (less yolk or more white). This will change the taste a bit, but if you like the texture you can tweak the sweetness, richness, or spice balance afterwards to your taste.

As for tweaking eggs, I usually find it harder to balance out, flavor-wise, which is why I suggest starting with flour. However, more egg white would help with binding and lifting, and also dry out the result somewhat, less yolk would cut down or moisture and richness a bit. The flavor profile and moisture level would dictate which you would choose and how much.

The other possibility, generally, would be to bake at a higher temperature for less time. This would help the outside of the cookie dry off and set before the inside gets too melty - notice the snicker-doodles in the picture are deeply cracked, that has to do with the outside setting before the inside is done expanding. However, the recipe is already on the high-and-short end, at 400* and 9-11 minutes. You might, if you want, try 450* and keep a sharp eye out, but it's tricky since I don't have a lot of experience with many recipes cooking at 450* to compare the cooking difference to.

Chilling the dough also usually helps, but you mention that you already do - though if you want to try freezing the dough balls, that might give you a touch more time for the outside to cook before the inside comes up to temperature.

Of course, this is more tweaks on how to get the recipe to do what you want. rather than any reason it doesn't match the picture in the cookbook to begin with. And they will change both flavor and texture. But the result may be good anyway, or may at least be tweak-able to a good result.

PS: never tried this, but for an unusual possibility - maybe look into subbing some suet for shortening or possibly part of the butter? Suet was used in puddings for this precise reason, its higher melting point let the dough set before the fat melted, giving a sturdier structure without losing richness. Probably will change the texture a bit, and possibly flavor, but might be... interesting :)

Make great chocolate chip cookies; the snicks fell flat, not at all what I wanted.

On a whim, switched to the old coated, dark pans I have, VOILA!

I experimented with more flour, less sugar, temperature, etc. but it was the stinkin' pan that did the trick.

My theory is that the dark pan (I think they are Wilton, or some such) conducts the heat better to the bottom of the cookie so that the batter cooks more evenly.

The only thing I can contribute is..FREEZE the dough and roll "tall" balls. I also use room temp eggs and melt my butter most of the way.

If I deviate from any of those key points, I lose my perfect shape.

There are two things you can do to insure less spread on your cookies.

The first thing you can do is chill your dough a bit longer before baking it. The reason cookies dough spread is because the dough reaches high enough temperature for the spreading to occur before the gluten sets its shape. Chilling the dough and help with this.

I've never made snickerdoodle cookies before, but I did it tonight and They came out of the oven puffy. I thought they speed suppose to be a flat cookie. So I looked up why they didn't spread or flatren out! The recipie I used only called for one cup of butter. I see the posted recipe also calls for oil too! Wow, that would make for greasy pancakes for sure. I'd cut out the oil part and stick to the butter only. Nice cookies, but way too sweet for me. Tha ks

Try cutting back on the fats to reduce the spread during baking, and cut the baking soda in half :)