Our home oven consistently undercooks food when we follow the recommended cooking directions.

Case and point: We just bought some chicken skewers from Costco. The directions say to cook them at 350F for 25-35 minutes. I just took them out after 35 minutes, and our digital probe thermometer read ~45C; well below the required 76C.

To measure, I found the thickest piece of meat I could find, and pushed the probe in, taking care not to go all the way through and touch the metal container that they're being cooked in.

I know it's likely not the oven not getting to temperature. It's a fairly new oven with a digital display that shows the current oven temperature (it was at 350F when I put them in). We also have a little bi-metal thermometer that goes in the oven itself. Last time we tested it, it agreed with the reading on the front of the oven.

It's also not likely the probe thermometers. We had 2 old bi-metal probes. I didn't trust them though (since apparently they can lose accuracy as the metal ages), so I went out and bought a new digital probe (mentioned above). After calibrating the 2 old ones one via the ice-water method and testing them on some chicken, all 3 probes agreed with each other within 2C.

We do live at a fairly high altitude (Calgary, Alberta, Canada [1,045 m, according to Google]), which if I recall, can mess with cooking times. I can't see that having this much of an effect though.

What are the possible problems here? 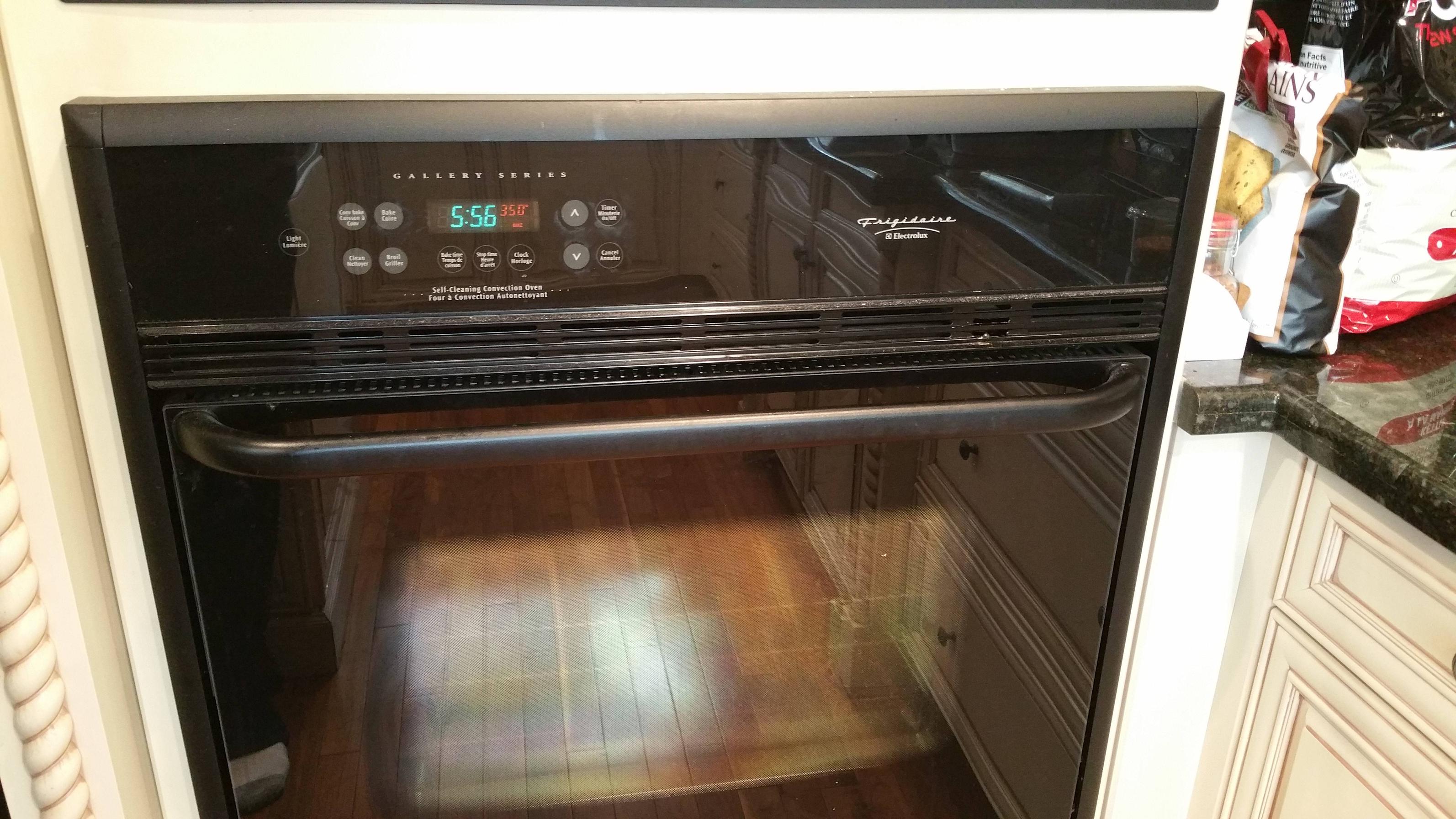 Checking the temperature after it had been in for 45 minutes (10 minutes extra). Note it's only at 47.9C: 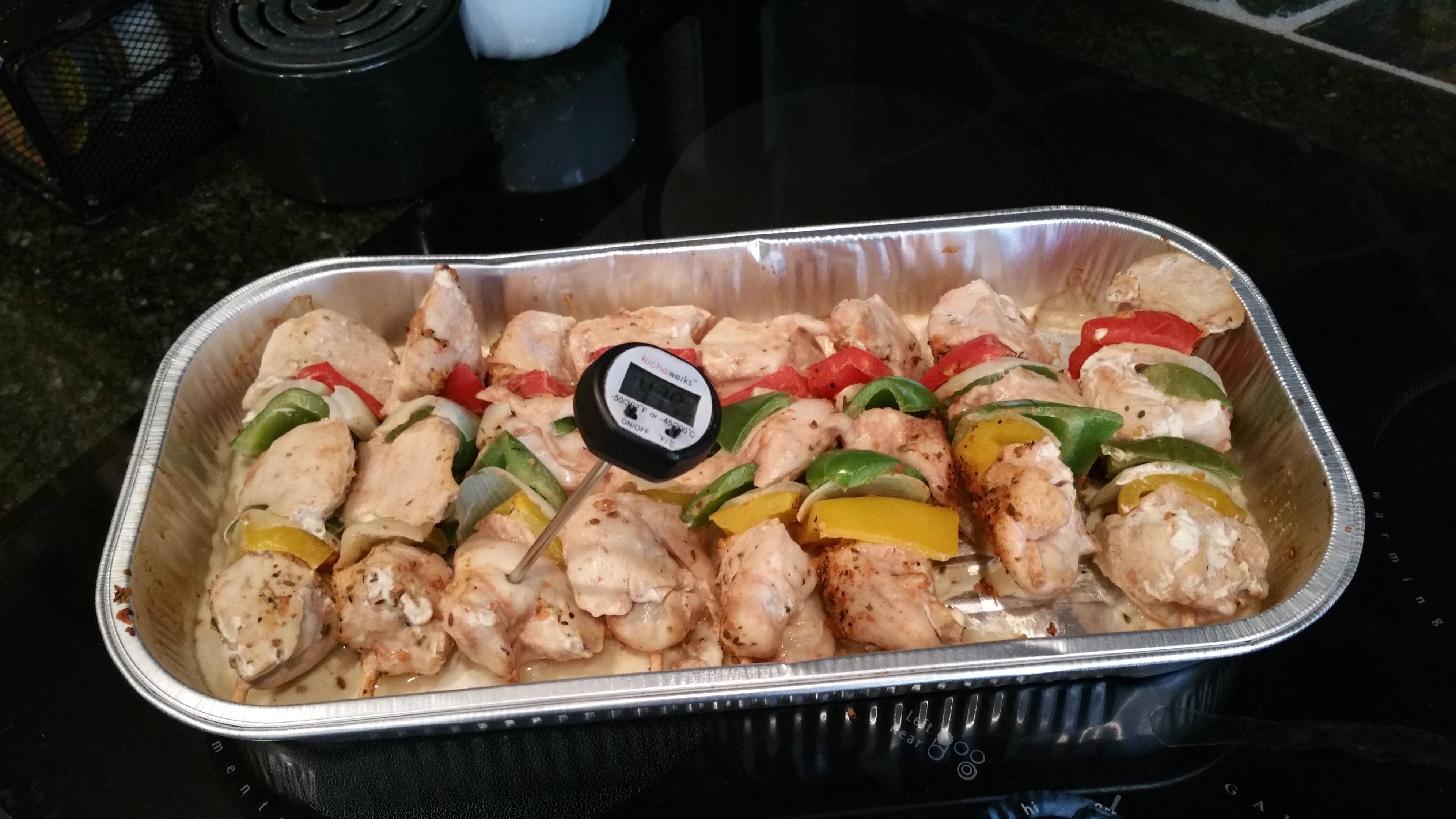 I just took them out again after 55 minutes, and it was only at 56C. I put them in for another 10 (which in total will have been an extra half an hour).

Especially with a fan oven, opening the door can let a lot of heat out, so checking repeatedly can slow things down further. I assume you didn't test the meat with the door still open, that would make things much worse.

When you do check (at nearly the cooking time) anything tightly packed into the container like the skewers in your picture should probably be rearranged, so that those in the middle end up on the outside.

If you put a foil dish on a baking sheet to make it easier to lift out, preheating the baking sheet might help, especially if it starts quite cold. It can also take a while for an oven to come back up to temperature after adding something like frozen chips.

I also suspect that the middle of the inner skewers may have been very cold still, maybe even icy. I know defrosting in our utility room (not directly heated, probably around 12C in what passes for winter here) can take longer than you think. (BTW defrosting at the back of a fridge or in the meat drawer can take a very long time). This wouldn't be enough to explain the whole delay in cooking. As has been noted in comments, defrosting for hours at room temperature isn't recommended by some guidelines, but I and many others wouldn't think twice about it when the room is cool and the container closed.

I suggest that in this specific case a few factors combined to slow things down: the oven a touch under, the food colder than expected, and a lot of heat let out of both the oven and the food with repeated testing.

Oven temperatures are conventions and really mean little. Plus, typical home ovens vary widely, so that when you set the dial to 350, the interior can easily fluctuate between 330 and 370, and that is when your oven is correctly calibrated, which few are! So, it is probably not getting to the temperature that the readout says. An oven thermometer can help get you in the ball park...but...no big deal...You are on the right track using a thermometer to measure the internal temperature of your food. Be sure to calibrate your probe thermometer to make sure it is accurate. Then, you are just going to have to get a feel for your particular oven, by setting the temperature a little higher and/or leaving food in a bit longer. Take note, and you should soon recognize a pattern that you can work with.

Whenever you cook something, best to keep the times just as guidelines, and use a meat thermometer to measure what you are cooking. Also remember to take the meat out of the fridge to room temperature well before cooking it, to let it heat up. This will let the internal temperature of the meat reach the required temperature faster, with less oven/pan time and it will get you a better cooking result. If you also use a thermometer to measure the internal temperature of the meat before putting it in the oven, it will allow you to remove one variable from the equation.

Not the answer you're looking for? Browse other questions tagged oven temperature or ask your own question.

64
Is there a problem with defrosting meat on the counter?
49
How do I know if food left at room temperature is still safe to eat?

4
Vegetable internal temperature (oven)
3
How to deal with an inaccurate oven thermostat
7
Is a little oven less hot than a bigger oven?
2
Can I do anything to make my gas oven better?
2
Troubleshooting Oven BBQ Cooking Times
3
How to determine whether oven thermometer is accurate?
3
Rack vs Baking Pan vs Roasting Pan and Position
1
Cooking lean pockets in toaster oven?
0
My oven seems to cook the outside faster than the inside
3
Oven is at the correct temperature but things are baking consistently slower than recipes suggest