What type of bread buns do premium burger restaurants use? [closed]

If you have a hamburger at a fancy deli they'll often have a very fancy bun. However, I have never seen these buns for sale at bakeries or grocery stores.

What kind of different buns exist for "high end" (15$) hamburgers? I'd like to get a list of as many of them as possible and then I'll narrow my search to the ones I can reasonably make or buy.

I don't think there is one answer to your question. Every restaurant makes a choice about what it thinks a high end bun is. I would personally say either a brioche bun or an onion roll.

I think the key is that the bread is fresh, it's different from a white bread bun, and it gets a little TLC itself.

I would choose one of the two buns I did, because there is an obvious taste/texture difference between them and a standard bun. Also, what I meant by TLC is that most places just treat the bun like something to keep the burger grease off your fingers.

You'd be surprise at how it changes the bun if you put a thin coat of butter on it and slap it on the grill/flat top to crisp up. Steaming the bun also really ramps it up in my opinion. We've started steaming our plain white hotdog and hamburger buns and they're awesome. Another technique that's pretty much exclusive to the flat top, unless you have an add-on for your grill, is cooking the patty and/or bun on top of a pile of chopped onions. The onions caramelize, but the onion juices that cook out, steam up and get inside the bun to a certain extent.

So I think the choice of bread is secondary to what you do with it to jazz it up, because to be honest, a high end hamburger is more about the person eating it's perception of it being high end. I've eaten high end hamburgers cheapo hamburgers. I don't taste enough of a difference in the actual meat and bread to make me wanna pay a high price. Typically, the difference is in any seasonings, sauces, or preparations they do with it.

I seldom eat hamburgers, but one place I really like is Fuddrucker's. Their buns are baked in-house and are considered by many people to be the "perfect" sandwich bun. 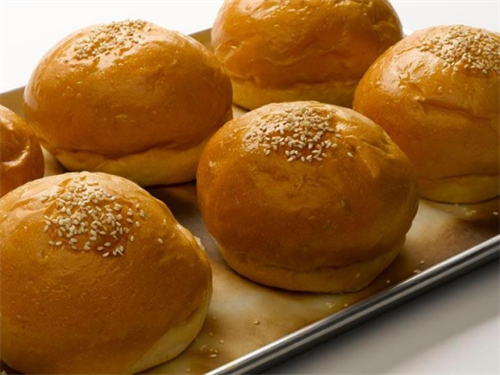 You'll get many hits by Googling "Fuddrucker bun recipe", for example:

Also, if you search YouTube for "Fuddruckers bun" there are several recipe videos, and a couple of videos from an actual Fuddrucker's bakery.

The Fuddrucker's bakery videos are short and fast, but you might catch a glimpse of their technique: 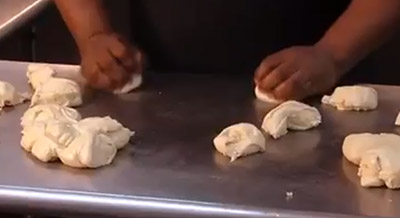 If I wanted to make my own version of a "fancy" hamburger bun, I would try to replicate Fuddrucker's. They're something that really adds to the overall sandwich, making it worthwhile to spend the time and effort to make them yourself.

At "a fancy deli" I'd be thinking kaiser roll. Because it's a deli, not a burger joint...

Not the answer you're looking for? Browse other questions tagged bread hamburgers or ask your own question.

8
What is the secret of making a really juicy burger?
1
What would you use to wash pretzel hot dog buns?
10
How to bake burger buns so that they expand horizontally instead of expanding vertically?
14
How do I make my bread/buns super soft?
6
How to make professional style burger buns?
6
How can I make fresh burger buns like Hardees?
1
What is the diference between a quinoa burger, a quorn burger, and a soya burger?
2
Is it possible to make burger buns pans made with paper tape?