How do you know when your flavor base is thoroughly sauteed?

I have read that sauteing is basically taking all of the moisture and bite out of aromatic veggies. My assumption is as long as steam comes out of the flavor base (not fat burning smoke) there is some moisture to cook off.

Is it true? How can you know when your flavor base is properly sauteed?

Usually when sauteeing (or more precisely, sweating) vegetables meant to form an aromatic base, you're doing three things:

The first of these is really the most important; driving off moisture is a natural result of doing so. The cell walls in vegetables act as little "containers" that store all the moisture, nutrients, and flavorful compounds present in the vegetable. You want to break them down in order to release those contents, or the flavors won't have as much time to combine and mellow in the aromatic base. Of course, by releasing the moisture and compounds you're also giving some of the water a chance to evaporate, and some compounds like sugars a chance to caramelize slightly which deepens their flavor.

The usual guidance for knowing when you've sweated sufficiently for a flavor base is to look for transparency. Onions in particular will start to look glossy and softer around the edges, and you'll notice that you can see right through them in thinner layers. Like so; see how you can clearly see the color of the spoon right through these onions? 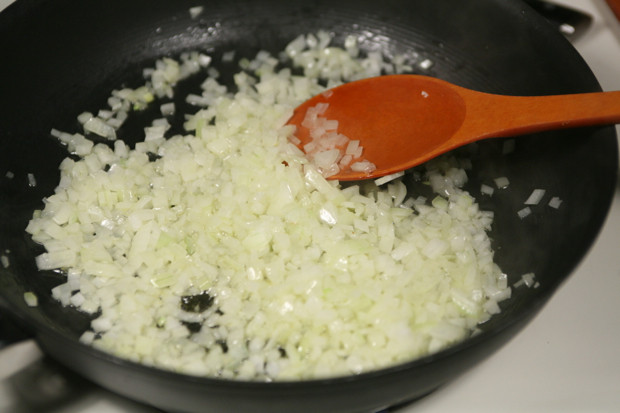 The same thing happens with other vegetables too but onions are the most noticeable, and fortunately they're present in quite a few traditional bases (mirepoix, trinity, and sofrito all contain onion for example).

Of course this does depend a little bit on what flavor you're trying to bring into the finished dish. Some preparations (French onion soup for instance) call for extensive caramelization, and for onions to be sweated until they've gone far beyond translucent and have become a rich brown color, which also develops a deep, sweet flavor. So if that's what you want, you can keep on sweating for as long as you like (or at least until you move from sweating to, um, burning).

Here for instance are some onions that have been cooking for a longer period of time; notice that they've developed a mild golden-brown color and are nearly see-through around the edges: 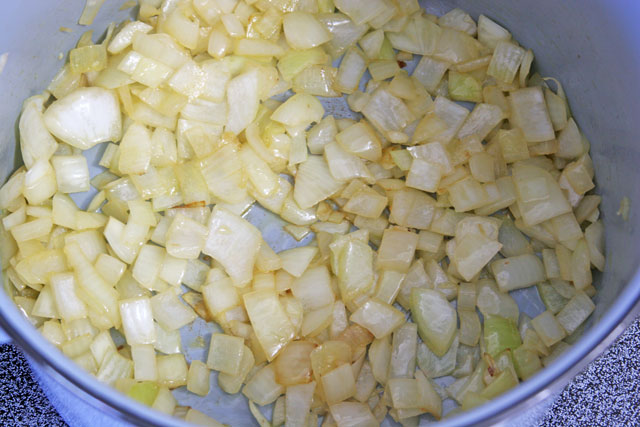 There's no specific temperature to look for here as it's more about time and breakdown; fortunately, sweating happens slowly, and it doesn't need to be overly precise. Look for glossiness which lets you know that moisture is escaping, and transparency which gives a visual indication of cell wall breakdown, and you'll be fine.

Not the answer you're looking for? Browse other questions tagged sauce flavor frying sauteing or ask your own question.

5
Difference between sweating and sautéeing?